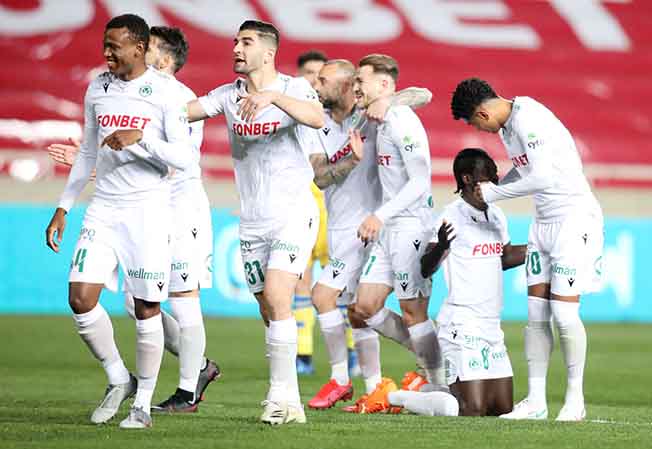 Omonia have a one point lead at the top at the end of the regular season. The Greens enjoyed near total domination against arch-rivals Apoel on Saturday in a 1-0 win

AEL and Apollon managed to safely navigate the final round of the Cyprus First Division’s regular season after grinding out hard-fought wins against Enosis and Ethnikos Achnas.

The Limassol duo remain in second and third position respectively after Omonia’s 1-0 win over Apoel in the Nicosia derby on Saturday. AEL are one point off Omonia in first, while Apollon trail the Nicosia club by two points.

In the early Sunday game, AEL managed to scrape through with a 2-1 away win over Ethnikos despite the home side applying a lot of pressure throughout the second half in their search for an equaliser.

Speaking after the game, AEL manager Dusan Kerkez said that his side were not surprised by the difficulty of the encounter.

“We were expecting a tough match. You have to play very well to win this season. We knew that Ethnikos, with my friend Elias, plays very good football,” Kerkez said, referencing Ethnikos manager Elias Charalambous.

“There is no one at AEL who is not dreaming of winning the league title. We still have ten derbies left, as well as the Cyprus Cup. Our first objective is qualifying for a European competition. We are close. For sure, if we are close to the top by the end we will try to win the title,” Kerkez stated in his post-match press conference.

Later on DSunday, in what was a slightly more controlled but no less gripping affair, Apollon defeated Enosis 2-1 at home.

Despite being in control for the majority of the game, Apollon could not find a way through during the first half and generally struggled to create high quality opportunities, partly due to Enosis’ resilience in midfield and at the back.

The most topsy-turvy part of the game came between the 69th and 82nd minutes, with all three goals scored during that 13-minute stint.

Apollon took the lead through debutant Wilde Donald Guerrier in the 69th minute, before Enosis were awarded a somewhat dubious penalty after the referee was called to review a handball incident by the VAR officials. Apollon retook the lead in the 82nd minute when Charlison Benschop also scored from the penalty spot after being pulled by Gregor Balazic.

“Do not forget that our club has not won the league title in a long time. Pressure has accumulated. This adds pressure on the players who are now being called to resolve this issue. Indeed, this has caused a lack of composure during the game,” Petrakis explained.

“Our point tally does not do us justice. This happens in football. I do not want to find excuses as to why this is happening. The pressure, in combination with some injuries, has resulted in us not being able to string together good results,” Petrakis later added.

A day earlier, Omonia enjoyed near total domination against arch-rivals Apoel, with the final 1-0 score not being reflective of the home side’s performance.

“We are happy for the win. We deserved to win. We scored a nice goal but we could have scored more,” said Omonia manager Henning Berg after the game.

“We have an advantage (going in the playoffs) because we have more points. We will play everyone and everything is open for the top four clubs,” Berg added.

The regular season came to an end on Monday night, with Pafos FC beating Ermis 3-1 at home.