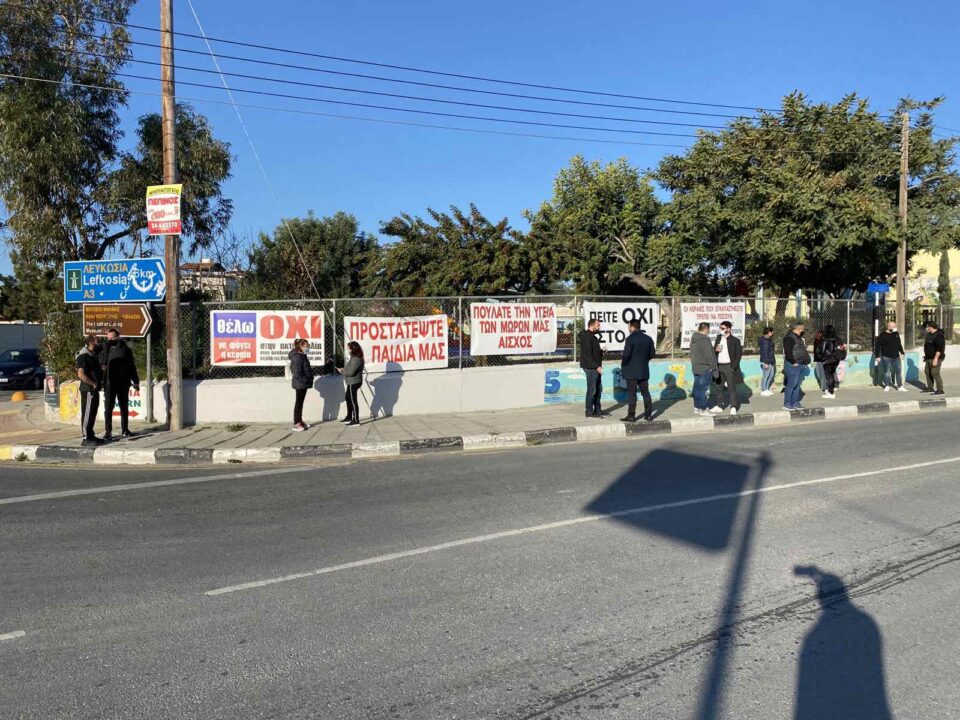 Parents’ associations and the mayor of Livadia held a demonstration on Wednesday morning, protesting the installation of a 5G antenna by Cyta on the roof of a centrally located supermarket.

The protest took place on the street outside the public kindergarten of the Larnaca suburb which is located 50 metres from the supermarket.

Protesters placed a banner on the wall of the kindergarten, which read “Protect our children” “You are selling the health of our babies – Shame ” ” Say no to 5G ” “The antennas you install must fall – The health of our children and residents is not up for negotiation” and “I want the antenna to go away – No to radiation”.

“The problem started last week when a Cyta crew, without the organisation even submitting an application to the municipality, illegally installed a 5G antenna on the roof of a well-known supermarket. As soon as we were informed about the incident, I personally went to the area after first notifying police and finally we managed to stop the crew from installing the antenna,” mayor Marios Armenis commented.

“After a conversation I had with a senior Cyta executive, I received assurances that the organisation would not proceed with the connection of the antenna, unless it first submitted an application for a permit to the municipality of Livadia which would be properly considered by the municipal council. However, despite the assurances I received, the Cyta crew proceeded illegally, not only with the installation, but also with connecting the antenna.”

It is a major issue to install such an antenna in the centre of the municipality at the distance of only 140 metres from both the public kindergarten and primary school, he added.

On Tuesday, the mayor went on to say, he received a letter from the general manager of the supermarket, “in which he informed me that he had sent a letter to Cyta and asked them to immediately remove the antenna from the premises.”

The municipality is already in court with a company as three antennas have been installed in area, two very close to schools and a third in the coastal area.

“Because the three antennas were installed illegally, the municipality sent two letters to the Cyprus Electricity Authority, requesting their disconnection.”

Elena Miltiadou, head of the parents’ association of parents of primary schools in Livadia, said a total of 725 children attend three schools and kindergartens in the area.

“What the parents’ associations ask is for the company to make the application first to the municipality, which with its own experts will examine the range of the antennas, since there are three antennas already installed in the area. Only the municipality can indicate the place where the antennas will be installed and certainly not 50-100 meters away from the schools.”

The protest was attended by around 30 people who observed all coronavirus protection measures, such as wearing masks and keeping a social distance, a statement said.

A Cyta spokesperson was not immediately available for comment.

Psychic medium is a link to the spirit world

EFG International grows its business with net profit up 22%