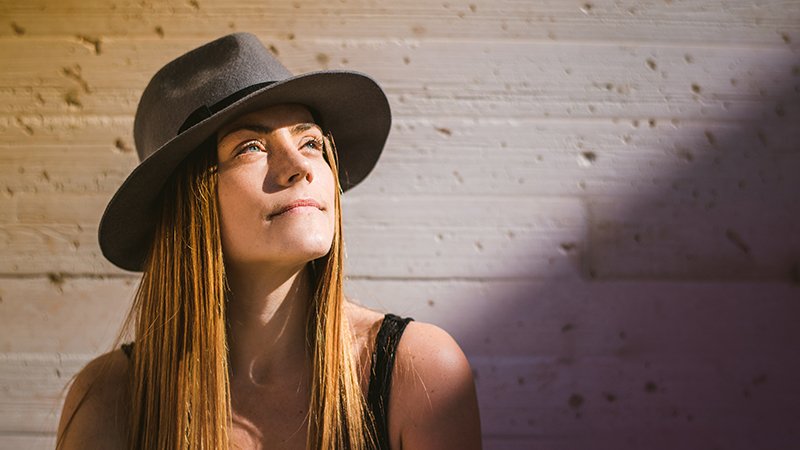 Where do you live?
In Limassol with my husband and daughter.

What did you have for breakfast?
A bowl of fruit and a STRONG coffee

Describe your perfect day
Waking up with my daughter & husband all in bed together laughing and playing. Then a lazy beach day playing with them in the sand and sea followed by a gig with my band in the evening.

Best book ever read?
The Secret by Rhonda Byrne. The first time I read this book I didn’t take it too seriously but I understood the general concept. A few years later I went back to it and have been using its methods ever since. I use it daily to visualise my dreams and goals and have built my whole belief system around it. Ask me again in a year and I’ll tell you if it has worked 😉

Best childhood memory?
Disneyland – we went there when I was about six. I remember it vaguely but remembered it being so magical. My mum also kept photos of me crying outside the Honey I Shrunk The Kids area where a can of Coke was about 20ft high and I was standing beside it crying because I was scared of it. Good times!

What is always in your fridge?
Chocolate 😀

What music are you listening to in the car at the moment?
Kaleo & my new original material. I listen back to my new tracks after I’ve recorded them to see if I can do better or change anything – and to visualise it being played on a hit radio station some day instead of from my phone.

What’s your spirit animal?
Ooo tough one – I think probably a dolphin. They have always been my favourite simply because of their beauty and tranquillity.

What are you most proud of?
My daughter (when she behaves) and the things I’ve achieved in my career so far. I was an opening act for Scottish singer/songwriter Sandi Thom when she came to Cyprus in 2018. I performed my original material for the first time there – a very cool night for me. Meeting and performing for movie star Colin Farrell in 2017 in Limassol! What an amazing night!

What movie scene has really stayed with you?
The performance scene of Bohemian Rhapsody where Rami Malek walks out on stage as Freddie and you can just see an ocean of people in the audience at Wembley Stadium during Live Aid. Wow!

If you could pick anyone at all (alive or dead) to go out for the evening with, who would it be?
Freddie Mercury

If you could time travel when/where would you go?
I would go into the future to see if earth survives global warming, pollution and the general daily suffering we have caused our planet. I would then jump back to today (if I’m allowed) and warn everyone about the future.

What is your greatest fear?
Never being able to sing, play or hear music again.

What would you say to your 18-year-old self?
Read The Secret by Rhonda Byrne now instead of in 10 years. Also don’t let your lack of confidence stop you from doing anything you want to do. Just let go, do it anyway and have a good time doing it.

Name the one thing that would stop you dating someone
Smelly farts! Ewe!

If the world is ending in 24 hours what would you do?
Get my family all together and have a party and enjoy our last day. Buy as many donuts and cakes as I could and eat them all without guilt. Kiss my daughter a million times and maybe give her a bite of my donut.

Biden White House asks “Trump who?” ahead of speech to conservatives

A spring of wellness