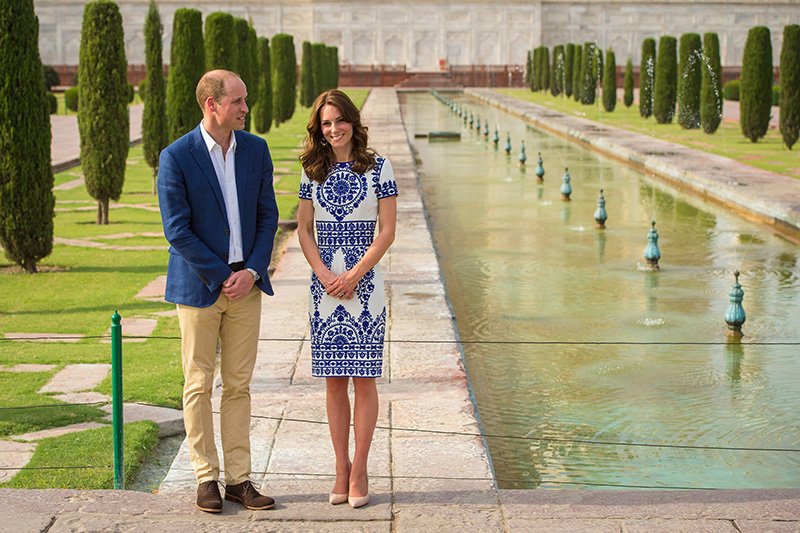 The Duke and Duchess of Cambridge during a visit to the Taj Mahal in India during day seven of the Royal tour to India and Bhutan. Dominic Lipinski/PA Photos.

This April, William and Kate will celebrate their 10th wedding anniversary, marking the occasion when Catherine Middleton became the Duchess of Cambridge and began her reign as royal fashion queen.

Now a mum of three, Kate’s style has changed considerably over the years, as documented by fashion writer Bethan Holt in her new book The Duchess Of Cambridge: A Decade Of Modern Royal Style.

Here’s a look back at 10 key looks from the past decade, and how Kate’s personal style has evolved…

“Kate’s wedding dress was such a clever blend of the personal and historical,” says Holt, of the gown designed by Sarah Burton for Alexander McQueen.

“Those long lace sleeves felt very classic and demure, perhaps a nod to Grace Kelly, but then the subtle bustle detail elevated it into something more grand and stately, befitting a future Queen. It was brilliant that she supported a British label which had been quite avant-garde, too.”

The Duchess chose an Emilia Wickstead dress and Jane Corbett hat for a royal garden party. “This was such a pretty look for Kate’s first Buckingham Palace garden party,” Holt says. “Although she knew all eyes would be on her, she nevertheless chose to recycle a dress worn earlier in the year, which showed that she was conscious of not upstaging more senior royals, but her new hat really rose to the occasion.”

“When Kate chose a Topshop maternity dress, it was a very relatable moment for women around the world,” says Holt. “Thousands chose to buy into her look, creating a huge uplift in sales for the high street retailer.”

Kate donned a bright yellow Roksanda frock for a visit to the Sydney Opera House during the official tour of New Zealand and Australia.

Holt says: “This was such a bold fashion moment from the Duchess. She had been doing diplomatic dressing for a while by this point, but Australia’s national colour, yellow, is perhaps not the easiest to wear. She could have incorporated it in an understated way, but I love that she just went for it here.”

“With its over-blown floral print and full skirt, this gown proved to be a divisive look,” Holt says of the colourful Erdem gown seen at the 100 Women in Hedge Funds Gala Dinner. “Some people loved how different it was to anything Kate had worn before, others found it too fussy.

“There was so much pressure on Kate and William when they visited the Taj Mahal, as it had been the site of one of Princess Diana’s most symbolic photo opportunities,” Holt says.

While Diana wore a bright pink jacket, Kate chose “a calmer, more peaceful shade of blue in the form of an embroidered shift dress by Indian designer Naeem Khan. It was a great tribute to local talent and helped the Duchess to make the moment her own,” says Holt.

“It’s no surprise that Kate was compared to the dancing lady emoji when she wore this dress on tour to Germany,” says Holt. “This was a complete departure from her usual sleek silhouettes and the off-shoulder cut was quite daring, but it was still by one of her most trusted labels, Alexander McQueen.”

Catherine Walker, the brand that designed this coat, has been popular with royals for many year.

“It was the label which Princess Diana wore the most consistently all through her public life, and now it furnishes the Duchess of Cambridge with bespoke pieces for big moments, like this tour to Sweden,” Holt explains.

“This was a major fashion moment for Kate – she looked so polished, modern and elegant wearing a Gucci pussy-bow blouse, which was at once classic and of-the-moment,” says Holt. “She had also only recently started wearing trousers, and she really owned that masculine/feminine look here.”

“Kate’s Ireland tour was a masterclass in making diplomatic dressing exciting,” says Holt. “She kicked things off with this dress by Alessandra Rich – one of her new favourite discoveries – in a shade of green which I think could be labelled challenging. But it was a powerful gesture to a shade synonymous with Ireland, whilst still feeling fun and ladylike.”