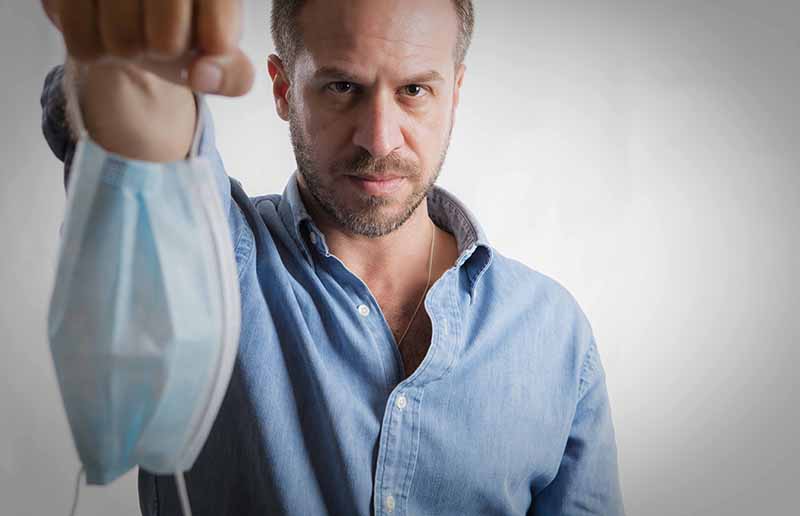 We are almost a year into the pandemic. Almost a year since the first lockdown and Covid-19 still has our hands somewhat tied behind our backs. This is not just the reality for Cyprus, most countries around the world are experiencing similar situations with lockdowns, packed hospitals, fed-up citizens and famous individuals suffering from the virus make sure it stays in all sectors of the news. One of them is Bafta award-winning British playwright, screenwriter and director David Hare, who transformed his Covid nightmare into an honest and raw play.

Beat the Devil, as the monologue is titled, is a Covid confession from, perhaps, the most important living British playwright. David Hare contracted it in March 2020 when nobody really knew much about it, not even doctors. He suffered a pageant of apparently random symptoms. In the play, Hare recalls the delirium of his illness, which mixed with fear, dream, honest medicine and dishonest politics creates a monologue of furious urgency and power.

In the UK, the play was performed in the summer of 2020, when live indoor theatre briefly returned, with actor Ralph Fiennes taking on the role. From next weekend, Andreas Araouzos will step into his shoes to bring Beat the Devil to Cyprus with performances starting on Saturday at A.G. Leventis Gallery in Nicosia. And yes, this is a play in English!

“There is a double spine in how the story unfolds,” he said. “Primarily we witness the full propagation of the author’s illness, so a Covid-19 adventure from Day 0 till the ‘end’. And simultaneously, always the political critic, Sir David Hare examines the UK government’s decisions and movements during the same period…”

The play comes at an interesting time. There is a semi-lockdown in place, theatres and museums are re-opening and yet Covid still largely affects our everyday life. Beat the Devil is a piece that almost all of us can relate to, whether we have had the virus or not.

“Theatre is, to me,” said Araouzos, “attempting to engage audiences with issues that trouble or inspire the artists involved. It is a forum of inspiration that is completed in the head of the spectator, at home, days after the performance is seen. At least that’s my term of ‘successful’ theatre. For the performance to stay with the audience for some time. Relishing and pondering and disagreeing and remembering and opening new lines of thought.

“When you have David Hare’s exquisite writing highlighting something that could not be more ‘current’ then you jump at the opportunity. This pandemic has crucially upset the entire planet and it isn’t short-lived. Additionally, there is a general sense of fatigue in people against their leaders and their tactics. A lot is coming to the surface now (and I was fascinated in terms of how parallel it runs with Cyprus!), and I find it is always healthy to hear the word ‘enough’ uttered with the eloquence of someone like David Hare, as opposed to numerous social media hashtags.”

With this funny, truthful and eye-opening play, Araouzos returns to acting in English for an intimate number of spectators per performance, in a living-room library. Only 25 audience members will watch each performance and because it is only 40 minutes long there will be two shows every Saturday and Sunday at 6pm and 7.30pm.

The stage set-up will remain simple, using the cosy Library of the Leventis Gallery, “a surprise corner of the building,” said Araouzos.

How long the performances will run for is uncertain but there is a possibility that audiences at home might be able to catch the play online when it concludes its run at the Gallery.

“I believe this is a ’raw’ theatre experience,” Araouzos commented, “with site-specific reality and a strong sense of ‘now!’, of ‘why?’ and of ‘hope…’.”