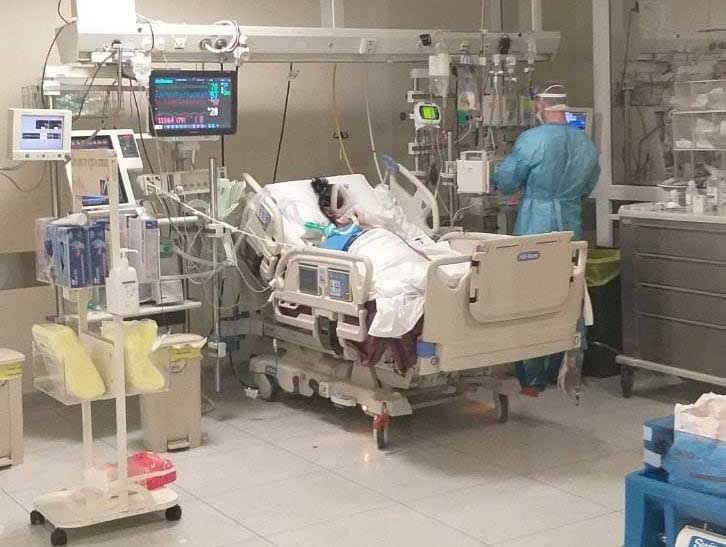 Most of the elderly have been vaccinated, so why are so many in hospitals?

Even with Cyprus poised to reopen a bit more, the situation in our hospitals due to Covid-19 has deteriorated at unprecedented speed.

There were 79 people in hospital with the virus on March 2; a mere nine days later, on March 11, that number had more than doubled to 185 – a truly spectacular increase. Even when hospitals were said to be overwhelmed at the beginning of January, the comparable rise was from 160 patients (on December 31) to 209 (January 9), a smaller increase both proportionally and in absolute figures. Throughout February – when we had over 100 cases a day, so not exactly zero – the number of hospitalisations nonetheless dropped steadily.

Even worse, the virus now seems to be causing severe disease in younger people.

“The average age of my patients at Limassol Hospital right now is about 54 years old,” says Dr Charis Armeftis, a pulmonologist on the front lines of the battle against coronavirus. “Back in January, it was 65 and over.”

The situation is worrying, Armeftis told the Cyprus Mail. “We intubated a patient last week, a police officer, 47 years old. Yesterday another one was intubated – again, 45-46 years old, without any particular underlying conditions. This is worrying.” The beds in the high-dependency unit are full, he added, and patients on full oxygen who might otherwise be in the unit are being kept in the regular ward.

Asked about the government’s plans to reopen on Tuesday, Armeftis was gloomy: “It would be a high-risk move,” he replied. “The relaxation of measures is a political decision; epidemiologically, scientifically, however, it’s wrong. It’s high-risk because, in 15 days, it could lead us back into lockdown.”

The plans are due to go into effect nonetheless, though restaurants and bars will be outdoors only and junior high schools or gymnasiums – which were also due to open originally – have now been delayed till the end of the month.

Sceptics will wonder if the crisis is real, of course. Some will argue that hospitals, being less full of elderly people – who are now protected by vaccination – may have admitted patients who would’ve been told to stay at home two months ago. “We have more leeway,” admits Dr Amalia Hadjiyanni, medical director of the Famagusta reference hospital.

But the leeway is rapidly vanishing as hospitals fill up – and Hadjiyanni adds, in any case, that almost all Covid admissions are on supplemental oxygen, i.e. seriously ill. Indeed, breathing difficulties are the main criterion for being admitted to hospital, with a need for non-invasive mechanical ventilation (one step before intubation) as the criterion for being moved to a high-dependency unit.

The bigger question, however, is why the surge in cases and hospitalisations is happening.

One obvious culprit is the relaxation of measures on February 8, when shops, malls and some years of primary schools were allowed to reopen. Many also point to a minority of people who break the rules by congregating in each other’s homes.

Then again, shops and malls (with the food courts closed) don’t translate to the kind of extended close contact that typically causes infection. Much was also made of schools as a driver, and clusters of cases were found at some schools in Limassol – yet, since the government began testing schoolchildren in response to the fuss, very few cases have been uncovered (nine positives from 10,980 tests last Friday).

Another data point is that an estimated 10,000 people marched in protest in Nicosia on February 20 – yet that didn’t lead to a spike in cases. Yes, it was outdoors and yes, most wore masks, but masks only offer so much protection. The protest claimed to be socially distanced, but videos show marchers in close proximity – not to mention the smaller (but still sizeable) protest a week earlier, when things turned violent and masks and distancing were largely forgotten; yet the Covid count in Nicosia remained stable. Clearly, it’s possible for lockdown measures to be broken without dire consequences.

And of course there’s another question, the most puzzling of all. Even if the rise in cases could be attributed to younger people circulating when they ought to stay home – why are those younger people now getting sick and having to be hospitalised and intubated, when it was mostly the (now-vaccinated) elderly getting seriously ill throughout the pandemic? Why were so few patients being admitted throughout February, and so many now?

The answer that’s emerged in the past few days is a virus mutation in the shape of the so-called ‘British variant’, a more contagious strain that affects younger people and was found in 25 per cent of local samples. That does seem to explain a lot of what’s happening – but it also leads to other questions, notably ‘Why has the virus mutated in this dangerous way at this particular point in time?’. Is it just coincidence?

Consider the case of Israel, the world’s most vaccinated country. The first jabs were administered just before Christmas. A few weeks later, cases spiked in the way we’re now seeing here, with younger people crowding ICUs and the British mutation blamed for the surge.

“Hospital beds left free by the inoculated over-60 population are being filled by the under-50 crowd,” reported Intelligencer on February 7, quoting Galia Rahav from the Sheba Medical Centre in Tel Aviv: “The British variant of the coronavirus brought us to our knees.”

In Britain itself, the pattern was similar: first vaccine on December 8, massive spike in the first week of January. France, on the other hand, hasn’t (yet) witnessed a big surge. It’s also had one of the slowest vaccine rollouts in the EU.

Could the vaccine be placing evolutionary pressure on the virus to mutate? Is this an unexpected side effect of mass vaccination? Or, in crude layman’s terms, since the virus can no longer infect the elderly, could it be evolving to attack those who haven’t been vaccinated?

Hard to say, as with most things Covid. Still, Petros Karayiannis, professor of microbiology/molecular virology at the University of Nicosia Medical School, reckons it’s unlikely. His argument is that evolutionary pressure would’ve led to “vaccine escape”, i.e. a new strain with the ability to bypass the vaccine – not a mutation targeting the unvaccinated, as we’re seeing now.

After all, the British variant isn’t new. It was first detected in a UK sample back in September – though it didn’t start to spread widely till the end of 2020, post-vaccine. It’s possible that we actually got lucky and the variant might’ve spread just as easily pre-vaccine, causing even more havoc since the elderly were still vulnerable.

So what happens now? More lockdowns? A push to vaccinate (and keep vaccinating) everyone, as the only reliable measure? The good news is, firstly, that younger people – even if hospitalised and intubated – are more likely to survive the ordeal than their elders were, and, secondly, that the new variant (which may be slightly more deadly, but still has a very low death rate) seems to peak fairly rapidly. Both the UK and Israel are in much better shape than they were a month ago.

There’s also a larger point. It seems obvious, but the best way to reduce hospitalisations is to reduce the number of people having to go to hospital. Given how the pandemic is playing out, with mutations arising and vaccines a probably imperfect solution, the case seems overwhelming for resources to be pumped into home care, so that mild cases – of whatever variant – can be treated before they become life-threatening.

Right now, “it appears that we’re abandoning people helpless at home, with no treatment and almost no advice,” epidemiologist Elpidoforos Soteriades told the Cyprus Mail, “until they reach a point when they have to go to the hospital, because serious symptoms have emerged threatening their life”.

The current protocol with Covid cases – as confirmed by Dr. Hadjiyanni – is fairly basic. Patients are told to check their temperature and oxygen levels, take painkillers and vitamins, and call their GP if they start not feeling well.

Given how completely hospital admissions drive our Covid response, this seems inadequate. Now that vaccines have been sorted out, it’s imperative that drugs are developed (many will tell you they already exist), so we can start to manage the coronavirus as we do any other virus.

In the meantime, the nightmare continues.