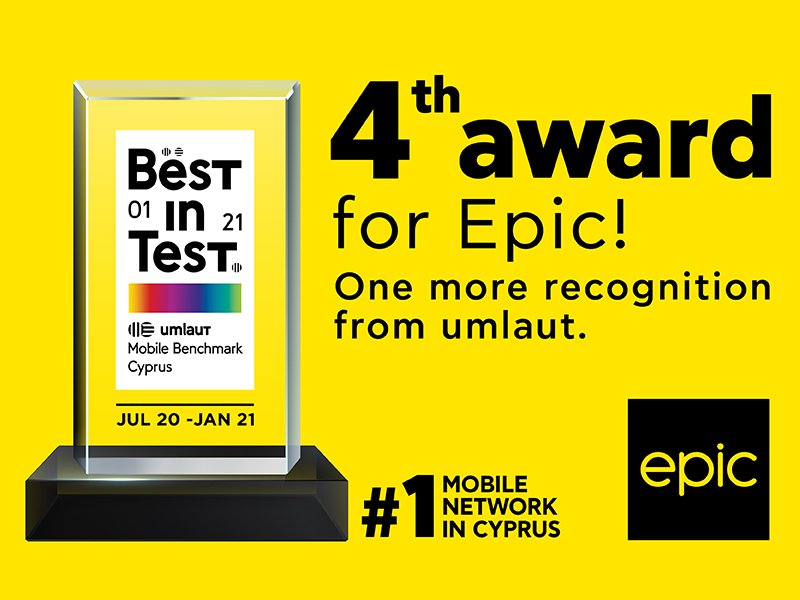 Epic has once again received the ‘Best Mobile Network in Test’ certification by the global independent measurements organisation umlaut, following a series of independent comparative measurements, conducted across Cyprus over July 2020 and January 2021.

The award, the fourth in a row, reaffirms Epic’s position as Cyprus’ leading mobile network.

According to the latest data, umlaut places Epic in pole position among all domestic mobile networks, with a total score of 911 points on a scale of 1-1,000.

As part of its new evaluation, Epic’s network secured top spot in three core categories: coverage, speed and latency, as well as in other indicative categories.

Breaking that down further, Epic’s mobile network stood out in:

“Epic shows the best user experience in Cyprus with a remarkable 911 points out of 1,000,” said Hakan Ekmen, CEO Telecommunication at umlaut. “Congratulations to Epic for achieving ‘Best in Test’ in these challenging COVID-19 times.”

The ‘Best Mobile Network in Test’ certification is the second award that Epic has received from umlaut. Its first nod from umlaut came in June 2020, after the evaluation of Cypriot mobile networks over November 2019 to April 2020, where, once again, Epic received the top position.

Epic’s excellence was also confirmed in November 2020, after a revised evaluation covering the period up to the end of October.

Meanwhile, Epic’s network excellence has also been confirmed by the fact that, during the same timeframe, the company received two consecutive awards for ‘Fastest Mobile Network in Cyprus’ by Ookla.

Such repeated recognition over the course of a year, demonstrates Epic’s ability to fulfill its promise to deliver a ‘Great Network’ at ‘Great Value’.

“Our commitment to provide an excellent communication experience is also confirmed by the stability of the measurement results,” noted Epic CEO, Thanos Chronopoulos. “Since last year, our mobile network has been awarded four times by two internationally-renowned organisations.

“Epic reaffirms its position as the No. 1 mobile network in Cyprus, proving our commitment to offer our subscribers a great network, at great value, as well as products and services of the highest quality, so that everyone can enjoy an epic communication experience, every day.”

For more information regarding the umlaut and Ookla awards, click here.

Oils and fats: the ugly, bad and good