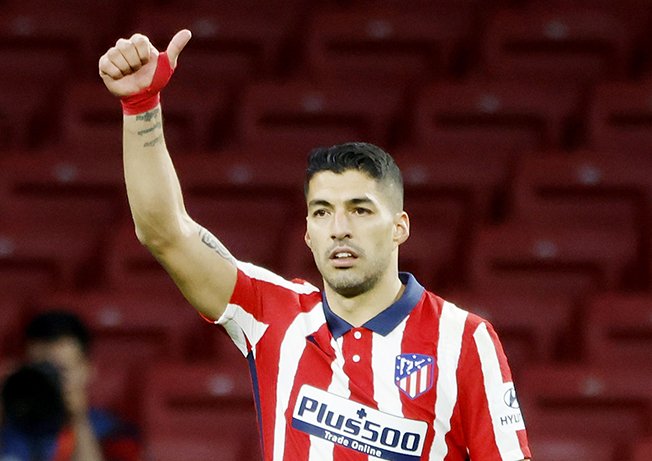 Luis Suarez, now with Atletico Madrid, has not scored in a European away game since netting for Barcelona against Roma in 2015

Atletico Madrid coach Diego Simeone has challenged striker Luis Suarez to end his long drought without a Champions League away goal and lead his side to victory against Chelsea in Wednesday’s last-16 second leg.

Suarez has not scored in a European away game since netting for Barcelona in a group stage match with AS Roma in 2015 and his side could certainly use his goals as they look to overturn a 1-0 deficit at Stamford Bridge.

“Suarez is a crucial player for us, a striker with a huge amount of experience and influence. It would be the perfect match to break that run which everyone keeps talking about, so why not?” Simeone told a news conference.

“Tomorrow could be a beautiful night for him and for us.”

Atletico have fond memories of their last match in England, when they knocked out then Champions League holders Liverpool with a thrilling 3-2 victory after extra-time at Anfield, although they had held a 1-0 lead in the tie from the first leg.

Simeone said the negative result obliged Atletico to play with more ambition than in the first leg, held in Bucharest due to COVID-19 restrictions and in which his team failed to have a shot on target.

He also praised Chelsea’s resurgence under Thomas Tuchel and said his side’s best chance of winning would be to put the Premier League outfit under pressure by scoring an early goal.

Chelsea have only conceded twice in 12 games in all competitions under Tuchel, while Southampton are the only team to have taken the lead against them.

“We’re facing a team in very good form, who have never lost with their new coach and who are very strong at home. I don’t think Chelsea have any weaknesses,” Simeone said.

He also confirmed record signing Joao Felix would start the game after being benched in three of the last four matches.

“He is a very important player for us, he had a great start to the season and gave us the quality in attack we needed. All players go through good and bad patches, especially when they are young,” Simeone added of the 21-year-old Portuguese forward, who cost the club 126 million euros ($149.99 million) from Benfica in 2019.