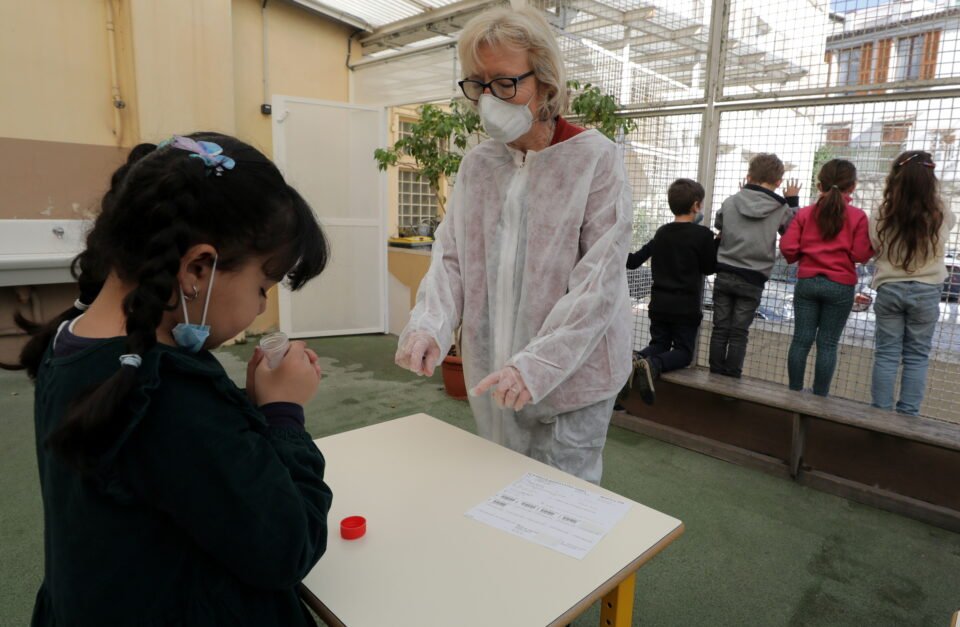 A medical worker performs a Covid-19 saliva test on a schoolgirl in a primary school in Nice, France

Pupils with disabilities can get tested for coronavirus in state hospitals by providing saliva which is then processed through the molecular method (PCR) but saliva self-testing is not considered reliable, MPs heard on Wednesday.

The issue was discussed at the House education committee with parents of disabled children calling on the education ministry to come up with another way of testing for such pupils because a nose swab is not the best option.

“There are peculiarities in the way these tests are performed, and, as a result, children with specific conditions, have difficulty in taking this test,” head of the committee, Disy MP Kyriacos Hadjiyiannis said.

The committee, he said, asked the health and education ministries to introduce alternative ways of testing for these children.

Hadjiyiannis also said they would ask the health ministry to vaccinate children with disabilities like the rest of the vulnerable groups.

A health ministry official, Carolina Stylianou, present at the committee meeting, told MPs that pupils with disabilities may get tested in state hospitals by providing saliva which is then subjected to PCR test. Parents can make appointments through their children’s schools, the official said.

The official clarified that in such cases the saliva collected is processed through the molecular method and not with rapid testing.

The official said that saliva self-tests, already used in some countries, are not reliable and that some countries are now withdrawing them.

Children 12 and over must present a negative rapid test each week to be allowed to attend classes in school.

On the same issue, lawyer Yiannos Georgiades, who represents around 4,000 parents who believe that rapid testing should not be obligatory in schools, said after the meeting that positivity rate in schools is 0.9 per cent which is less than one case per 100 pupils.

“We believe that there is great upset without the corresponding benefit,” Georgiades said.

He added that the group expressed their concerns to the MPs. Georgiades also said that several children presented alterative coronavirus tests, such as saliva, but their schools did not accept them.

Parents, he also said, want the education ministry tell schools and their head teachers not to put pressure on the children who do not want to get tested and threaten them that they will lose the school year or that they will get absences from classes.

Representative of the organised parents of children with disabilities, Christos Avgoustinos, welcomed the committee’s willingness to help as regards the vaccination of disabled pupils but also that the health ministry was looking into alternative ways for the testing of these children.

Mars long ago was wet. You may be surprised where the water went