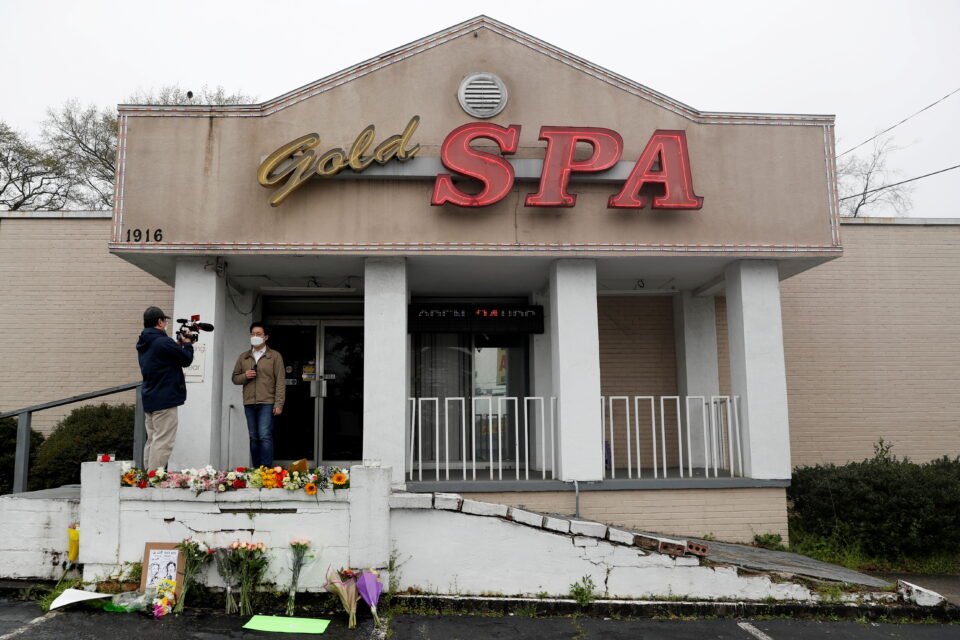 Police in Georgia sought clues on Thursday to what sparked the fatal shootings of eight people, six of them Asian woman, in a string of Atlanta-area attacks that heightened fear and outrage over a recent surge of hate crimes directed at Asian Americans.

The 21-year-old accused gunman, Robert Aaron Long, who is white, suggested to investigators that a sex addiction led him to carry out Tuesday’s violent rampage at three spas – two of them in Atlanta and one in Cherokee County about 40 miles (64 km) north of the state capitol, law enforcement officials said.

But authorities did not rule out the possibility that the attacks were provoked, at least in part, by anti-immigrant or anti-Asian sentiments, or some other grievance.

The shootings triggered an outcry from civil rights advocates and political leaders who condemned a rise in incidents of anti-Asian discrimination and violence since the COVID-19 pandemic began.

“We don’t yet know the motive, but what we do know is that the Asian-American community is feeling enormous pain tonight,” U.S. President Joe Biden said on Twitter on Wednesday. “The recent attacks against the community are un-American. They must stop.”

Earlier in the day, Captain Jay Baker of the Cherokee County Sheriff’s Department told a news conference the suspect had confessed to opening fire at the three establishments.

“These locations, he sees them as an outlet for him, something that he shouldn’t be doing,” Baker said. “It’s a temptation for him that he wanted to eliminate.”

Long, arrested within hours of the killings, was charged on Wednesday with eight counts of murder and one count of aggravated assault. He was being held in Cherokee County, where he resided and where the shootings began.

His first court appearance had been set for Thursday but was postponed without explanation.

Officials said Long indicated he may have patronized the very establishments he is accused attacking with a 9mm gun found in his car, but authorities could not immediately confirm whether he had been a customer at the spas.

And it was not clear whether the suspect may have visited spas for sex.

“At this time we cannot answer any questions pertaining to the businesses, nor services that any of these locations were offering during or before this incident took place,” Officer C.J. Johnson of the Atlanta Police Department said in a statement.

In an update issued Wednesday night, the department added: “Our investigation is far from over and we have not ruled anything out.”

Regardless of the suspect’s motives, the killings put the issue of anti-Asian hate crimes at the center of national discourse.

A report by the Center for the Study of Hate and Extremism this month showed that hate crimes against Asian Americans in 16 major U.S. cities rose by 149% from 2019 to 2020, a period when overall hate crimes dropped 7%.

Civil rights advocates have said the rise seemed related to Asians and Asian Americans being blamed for the pandemic, which originated in China. Former President Donald Trump called the novel coronavirus the “China virus,” the “China plague” and even the “kung flu.”

“The horrific violence overnight in Georgia is another reminder of why we need urgently to address the fear gripping the Asian-American community, in part stemming from racist incidents related to the coronavirus pandemic,” House Judiciary Committee Chairman Jerrold Nadler said on Wednesday. The panel’s civil rights subcommittee planned to hold a previously scheduled hearing Thursday on discrimination and violence facing Asian Americans.

The bloodshed began Tuesday evening when four people were killed and another was wounded at Young’s Asian Massage in Cherokee County, Baker said. Two Asian women were among the dead there, along with a white woman and a white man, Baker said. The surviving victim was a Hispanic man.

In Atlanta, police officers responding to a robbery report an hour later arrived at the Gold Spa beauty salon to find three women shot dead, then discovered another woman fatally shot in a separate spa across the street. All four women killed in Atlanta were Asian.

South Korea on Wednesday said its consulate-general in Atlanta confirmed that the dead included four women of Korean descent but was verifying their nationalities.

Little about Long’s personal life emerged the day after the shootings; he graduated from an Atlanta-area high school in 2017 and attended a nearby Baptist church.

An inactive Instagram account that appeared to have been his bore the tagline: “Pizza, guns, drums, music, family, and God. This pretty much sums up my life,” according to The Daily Beast.