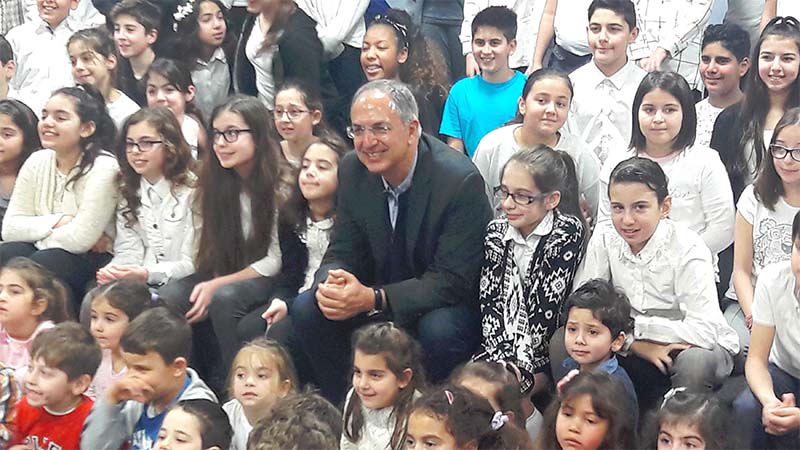 Minister Kadis with children of the diaspora

Leaving behind one’s country for economic/professional reasons is tough on both the immigrant and his friends/family, causing a lot of heartache all around.

Since its independence (1960) Cyprus has ‘exported’ a lot of immigrants to wealthy countries of the time, ranging (primarily) from the UK to South Africa, Australia and to a lesser extent to the USA. Originally the immigrants were uneducated and looking for a better future, but they had one goal in mind: to succeed and return home. At the time immigrants with very little knowledge of English got jobs at the lower end of the job scale.

The second and third generation have integrated, dealing in business, politics and all sectors of life but many yearn to return home, although this falls off with each generation.

These immigrants have since shown an interest in investing in real estate in Cyprus, corresponding to where there family originally left from (thus South African immigrants tend to prefer Paphos, those from the UK Larnaca etc). These immigrants were the backbone of the real estate demand post 1974 on which others follow.

During the Anzak day celebrations in 2019 in Australia, the parade included Scottish bagpipers, who were followed by the ageing Cypriot boys. This formation of Cypriot/Greek Australians and their bonding with and acceptance by their host countries is a vehicle for reciprocal business which ends up, in part, in Cyprus real estate investment.

Cyprus has benefited and still does, from those immigrant groups with the more recent ones being the Leventis Group, Dakis Ioannou (of the J&P Group), whereas in terms of politics, it will be amiss not to mention Mr Christopher (USA), Mr Clay who became the ambassador in Luxemburg of the USA) and so on.

These same immigrant groups formed the basis of the more recent Cyprus real estate promotion in their host countries, who helped in the organisation of exhibitions and inviting politicians and others (whereas the Cyprus embassies are still asleep). However these returning immigrants despite their somewhat good wealth, save a limited number, do not appear to have invested considerable amounts in Cyprus real estate other than private homes. So, in addition to the Cyprus Malls, some wineries and construction, their contribution is not significant. However various projects undertaken by them, although not directly related to real estate, have their own benefit for the wider market, upgrading the Cypriot economy and its attractiveness. Such projects include the Cyprus University (mainly the library), the Gallery in Nicosia, the Municipal Building in Limassol, whereas others, be it not immigrants, include the contribution to local hospital, Sir Stelios (of easyJet) with his bicommunal and other efforts.

So although the brain drain aboard continues (especially after the 2013 events) there are benefits for which we must always be thankful.

This state of affairs is more evident in Greece where the number of immigrants is equal to the size of the population of Greece (10 million) with very good connections with America (see Astoria, as a start).

The immigrant organisations are always there to help Cyprus business expand abroad and it is an asset for the Cyprus economy – we owe them many thanks.