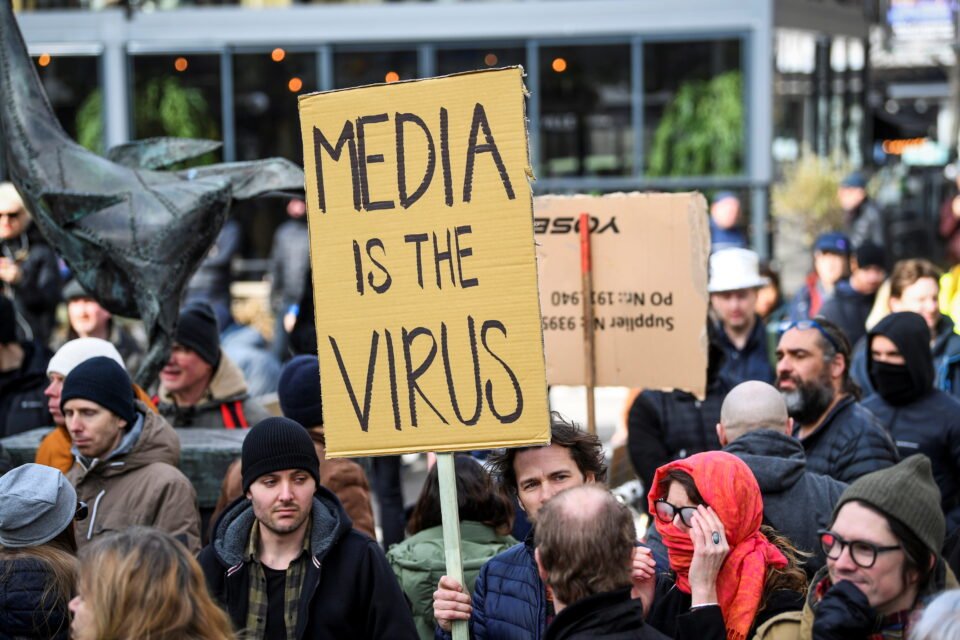 Protesters with placards take part in a demonstration to oppose government restrictions to curb the spread of Covid-19, in Malmoe

Sweden, which has shunned the strict lockdowns that have choked much of the global economy, emerged from 2020 with a smaller increase in its overall mortality rate than most European countries, an analysis of official data sources showed.

Infectious disease experts cautioned that the results could not be interpreted as evidence that lockdowns were unnecessary but acknowledged they may indicate Sweden’s overall stance on fighting the pandemic had merits worth studying.

In the past week, Germany and France have extended lockdowns amid rising coronavirus cases and high death tolls, moves that economists say will further delay economic recovery.

While many Europeans have accepted lockdowns as a last resort given the failure to get the pandemic under control with other methods, the moves have in recent months prompted street protests in London, Amsterdam and elsewhere.

Sweden, meanwhile, has mostly relied on voluntary measures focused on social distancing, good hygiene and targeted rules that have kept schools, restaurants and shops largely open – an approach that has sharply polarised Swedes but spared the economy from much of the hit suffered elsewhere in Europe.

Preliminary data from EU statistics agency Eurostat compiled by Reuters showed Sweden had 7.7% more deaths in 2020 than its average for the preceding four years. Countries that opted for several periods of strict lockdowns, such as Spain and Belgium, had so-called excess mortality of 18.1% and 16.2% respectively.

Sweden’s excess mortality also came out at the low end of the spectrum in a separate tally of Eurostat and other data released by the UK’s Office for National Statistics last week.

That analysis, which included an adjustment to account for differences in both the age structures and seasonal mortality patterns of countries analysed, placed Sweden 18th in a ranking of 26. Poland, Spain and Belgium were at the top.

Sweden’s Chief Epidemiologist Anders Tegnell, a largely unknown figure before the pandemic who became internationally known as the figurehead of the Swedish response, told Reuters he believed the data raised doubts about the use of lockdowns.

“I think people will probably think very carefully about these total shutdowns, how good they really were,” he said.

“They may have had an effect in the short term, but when you look at it throughout the pandemic, you become more and more doubtful,” said Tegnell, who has received both death threats and flowers as a token of appreciation.

“All of us have to be really careful interpreting death data connected with COVID-19, whatever its source – none of them are perfect,” Mark Woolhouse, professor of infectious disease epidemiology at Britain’s University of Edinburgh, told Reuters.

“They do raise a question about whether, in fact, Sweden’s strategy was relatively successful. They certainly raise that question,” he said, commenting on data first published in Swedish media and checked by Sweden’s statistics office.

He cited a range of factors such as the age structure and general health of a population, average household size and whether a country had megacity travel hubs as significant.

Sweden’s proportion of people aged over 80 was 5.1% at the start of 2019, lower than the EU average of 5.8% but on par with United Kingdom and higher than Norway and Denmark.

Sweden’s population is also generally healthier than the EU average with a life expectancy at 82.6 years in 2018, compared to an average 81.0 years in EU.

Sweden’s strategy has been heavily criticised by some at home and abroad for being reckless and not enough to protect vulnerable groups from the disease.

However, 43% of Swedes have high or very high confidence in how the pandemic is being handled, while 30% have low or very low confidence, according to a recent survey.

Sweden’s government and health authority have conceded they failed to protect Sweden’s elderly but maintained they did what they could to suppress the disease, while also taking general health of the population into account.

Sweden’s official COVID-19 death toll is more than 13,000, although some people may have died from other causes than the disease.

Changes, from Gesy to gender

Murray ‘gutted’ as latest setback rules him out of Miami Open