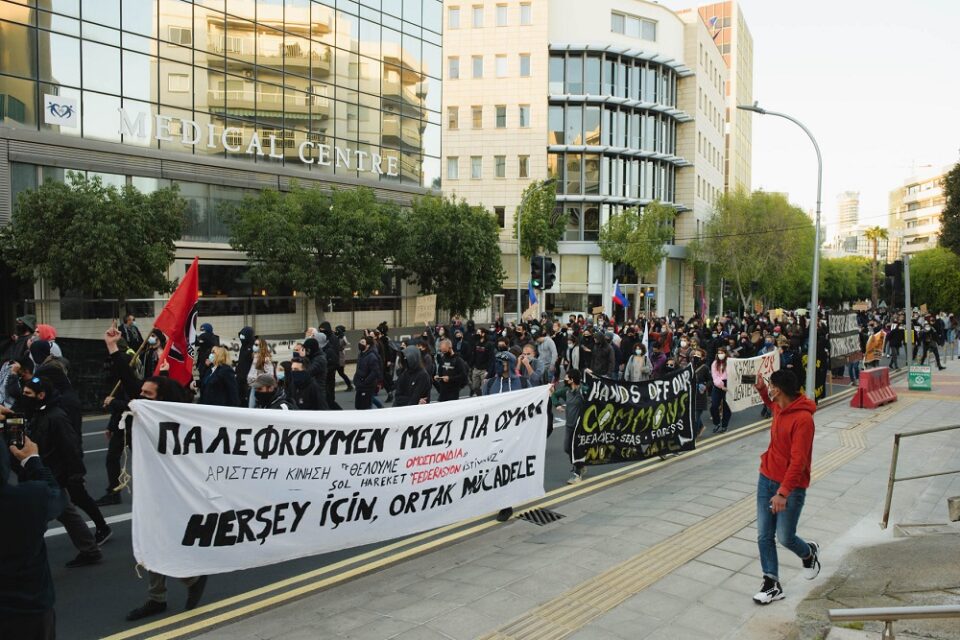 Os Damai (Enough!) group on Sunday called on politicians who criticise it to confront the truth instead of trying to conceal it.

The umbrella group, that held a rally on Saturday afternoon in Nicosia in which, it said, more than 2,000 took part, came under fire by some parties over its reference to “the government in the south” instead of referring to the Republic of Cyprus.

In their positions, published on Os Damai’s social media profile, in the part where the group calls for the opening of the crossing points and the removal of the razor wire the government installed along the buffer zone in Astromeritis, the group, said: “the government in the south immediately used the pandemic to put Cyprus on the path of final partition.”

This drew the attention of the Solidarity Movement and ruling Disy that chastised the group over this choice of words.

The Solidarity Movement was the first to react pointing out that the group refers to the Republic as “the government of the south.”

The party also said, among other things, that the razor wire was the only obstacle to the arrival of jihadis illegally channelled by Turkey. “We will not be surprised if relations between the jihadis and Os Damai are discovered,” the party said.

“It is harmful and provocative, he said. The MEP called on main opposition Akel which, he said, had in the past sided with Os Damai group to condemn this position.

Disy said later on Sunday that there is a way for those who consider themselves anti-systemic to express themselves. “However, when they insult the Republic of Cyprus by referring to a “government in the south”, this also proves what country they want,” the party said. It also accused Akel of not reacting out of fear of losing votes.

Os Damai said in response that some politicians rushed to accuse the group by distorting what they said. The group pointed out they said “government in the south” and not “of the south.”

“Those who turned the people of this island into “Cypriots of the north and the south” (according to Antonio Guterres), those who fight day and night to turn the Green Line into a border between two states, those who put the country in an endless regime of exclusion and entanglement, it is time to confront the truths told by our movement instead of trying to hide them,” the group said.

The group said the rally sent another strong message against corruption and state authoritarianism. It added that the rally was supported by many people from various organisations and social groups who marched from the interior ministry to the Presidential Palace through the main streets of Nicosia.

Os Damai said that in the six weeks of mobilisations and actions they have been organising, “we see the need to raise issues that concern a large portion of the population, which is tired of the failed management of the pandemic and disgusted with the rot and corruption that have skyrocketed under the current government.” The group said they would continue on the same path not only for Os Damai, but also for other groups, to exercise their democratic and fundamental right to protest.

Coronavirus: One year on, the state stands accused of changing the goalposts