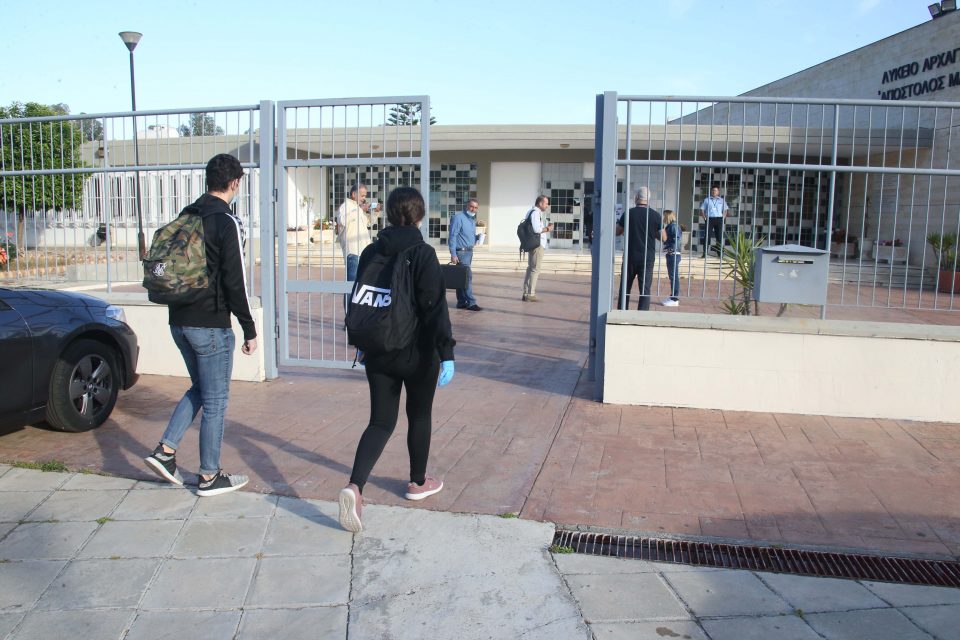 Gymnasium pupils islandwide and pupils of primary schools in the Limassol district returned to school on Friday, with authorities on alert to pre-empt possible outbreaks.

The need for caution was highlighted by the headteacher of Limassol’s Lanition Lyceum where 20 pupils have tested positive for coronavirus and another 133 are self-isolating at home as contacts of confirmed cases.

Amid considerable pressure from parents, the Council of Ministers earlier this week decided that pupils at lower secondary schools (gymnasiums) should return to in-person teaching, after three months of online classes. It clarified that all pupils had to present a negative rapid antigen test in order to be allowed to enter the schools. Alternatively, secondary school teachers’ union Oelmek head Themis Polyviou said parents would be contacted to take them home.

Cabinet on Wednesday also decided the primary school pupils in Limassol where in-class teaching was suspended for two weeks due to a surge in cases in the district, should also be back at their desks today.

The education ministry called on parents and guardians to ensure the pupils take the test, either at sampling points operating in all districts free of charge or at their own expense in approved private laboratories.

Minors undergo a nasal rapid antigen test which is less invasive. From Monday, April 5, mobile units will also be available for testing at gymnasiums. Moreover, the ministry plans to carry out sample tests among year 4 to year 6 primary school pupils, subject to their parents’ consent.

Against this background, Yiorgos Iosifides, head teacher at Lanition, told the Cyprus News Agency on Friday that a total of 20 positive cases had been recorded at the school in the past two weeks. And 133 pupils were self-isolating at home as contacts of positive cases.

Iosifides, who had taken to social media on Thursday to urge responsible behaviour to prevent a deterioration in the situation, noted that 153 of the school’s 800 pupils were effectively away from class.

He said some pupils may falsely claim they are contacts so as to avoid going to school. “The school takes steps, but it makes it very difficult for us when some declare themselves to be close contacts simply to stay home,” he said, adding that it was impossible to check who was a close contact.

He voiced particular concern that several pupils who should be isolating had been seen out and about, and urged parents to take their measures.

“Not all children are irresponsible but there are some who do not comply with self-isolation rules. We try to teach them that there should be socially responsible and careful,” he added.

Some pupils have had to self-isolate for two weeks two or three times and this is disruptive for their education.

The majority of the 20 pupils who have tested positive were infected within their family environment or out-of-school activities and not from the school, Iosifides said.

Three teachers are also in isolation. “The loss of a teacher is like the loss of a doctor from a hospital unit, and we must press ahead quickly with their vaccination,” he said.

He urged parents to do their share, to check their children who are supposed to be self-isolating are actually doing so, and not to object to rapid tests.

Meanwhile, Limassol school board president Dinos Ellinas said that the coronavirus outbreak at the Lanition appears to be isolated as other schools have not reported a worrying number of cases.

On the contrary, in the past 15 days there has been a drop in coronavirus cases recorded ar Limassol schools, he told CNA.

Bloody clothing found by police may link to murder investigation