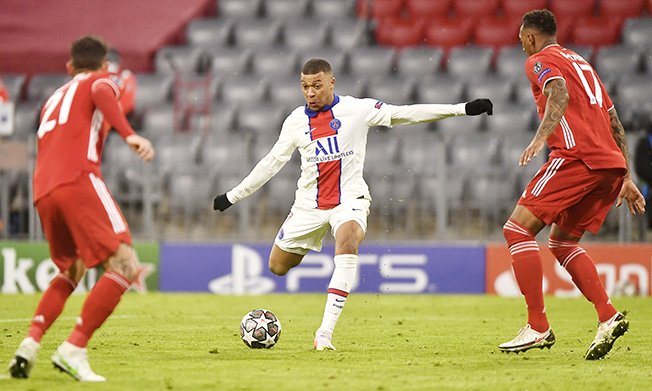 Kylian Mbappe starred for PSG, scoring twice in a thrilling 3-2 win over holders Bayern Munich in their quarter-final first leg

Mbappe fired in his eighth goal of the competition in the 68th minute after Eric-Maxim Choupo-Moting in the 37th minute and Thomas Mueller on the hour had cancelled out a two-goal PSG lead. It was Bayern’s first Champions League loss in more than two years.

PSG had stunned the hosts in the third minute through Mbappe, whose powerful low drive squeezed through the legs of keeper Manuel Neuer.

The French side were brutally efficient and scored with their second chance of the game when Neymar picked out Marquinhos with a pinpoint cross and the PSG captain beat Neuer in the 28th minute.

Choupo-Moting had headed onto the crossbar in the second minute but did better with another header in the 38th and Mueller brought the hosts level, nodding in a Joshua Kimmich free kick.

Mbappe scored from a quick counter-attack, however, and PSG survived late pressure from Bayern to hang on for victory ahead of next week’s return leg in Paris.

Myth of government SMS system exposed by guidelines for tourists