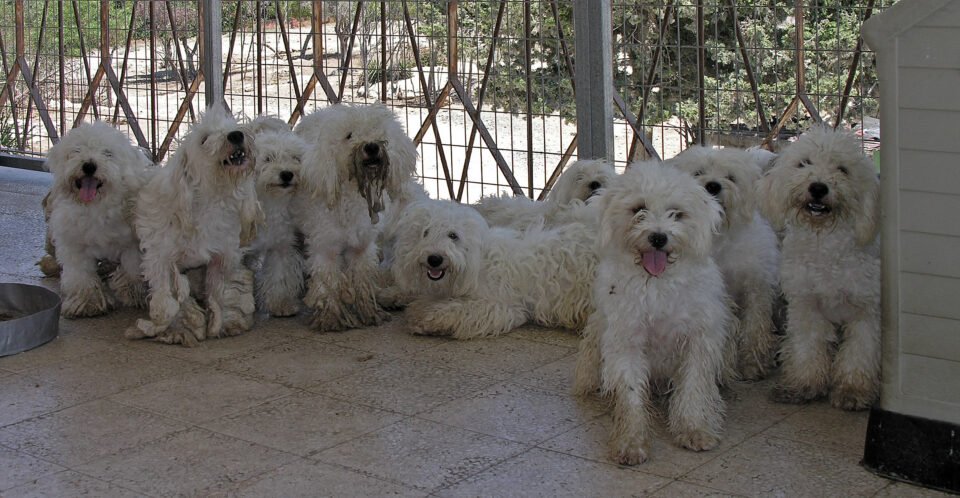 Back in 2009 when this photo was taken, Cyprus poodles were a common sight in dog shelters

Along with hunting dogs, poodle-type dogs used to make up the majority of strays. So why have they become so rare?

You may not have heard of the Cyprus poodle, but you’ve definitely seen it. Curly, fluffy and scruffy, these dogs used to be common, sometimes as beloved pets but all too often as strays.

Today, a combination of factors seems to have wiped them from the homes, streets and dog shelters of Cyprus.

“Of course, they still exist, but one could say they are almost an endangered species,” Sophia Ioannidou from the Nicosia Dog Shelter told the Cyprus Mail.

Essentially, the appeal of the Cyprus poodle is that it is a resilient, low maintenance dog, good natured and with a mild character, which makes them perfect for families and for keeping in the house. At the same time, they do not shed, which is a valuable characteristic for those with allergies to dog hair, Stella Stylianou from Argos Animal Sanctuary added.

“My first Cyprus dog was a poodle cross given to me by my husband’s cousin, who had brought over from England her curly haired poodle,” Stylianou said, adding that her dog was the offspring of the poodle and a terrier. “What I got was a white, straight haired terrier type, known as a Cyprus poodle/terrier.”

The Cyprus poodle is not an officially recognised breed, but rather an umbrella term coined to describe any and all small dogs, mainly poodle crosses, veterinarian Nicholas Ioannides clarified. “What all these dogs share are poodle phenotypes, meaning observable physical characteristics,” he said.

Local demand is not the only culprit for the Cyprus poodle’s apparent extinction. Among all animal shelters the Cyprus Mail spoke to, a consensus was formed that poodles seem to be disappearing from Cyprus due to high demand from twice as many foreign adopters than local ones.

“It is true that we do not come across as many these days as we used to a few years ago. It seems that they have all been rehomed abroad,” Stylianou commented. “It is sad that we are slowly losing this breed, if we haven’t already lost it, because all of them are sterilised prior to them being given up for adoption,” she added.

However, some shelters pointed out that Cyprus poodles that are still around and strays found on the streets tend to be considered too old for adoption. Poodles have several hereditary problems such as bad dental hygiene, which don’t appear until after 7-8 years of age, Marianna Philippidou from Sirius Dog Sanctuary said. “At that age most Cypriots consider them too old to adopt, and those who had them consider them high maintenance so they discard them.”

Many shelters have international links, sending dogs to forever homes from the UK to the Netherlands. “Foreigners aren’t as reluctant to adopt older dogs because they understand the true meaning of rescue,” Philippidou said. “They understand that it’s an act of kindness to an abandoned dog, to give it a second chance.”

Cypriots are just not responsible enough with the dogs they adopt, Nandia Nicolaou from Hope for Homeless said. “We are very strict now because in many cases, people adopt dogs and then abandon them again.” When it comes to poodles, the specific shelter has only found four or five strays in the past five years.

Similarly, vets don’t see as many of these dogs as they used to in the past.

“It seems all the strays have been exported abroad, and yet people still look for them,” Ioannides said. “Customers even ask us, the vets, where they can find them, they don’t understand that not even pet shops have them at this point,” he remarked.

In Cyprus, 99 per cent of people looking to adopt from a shelter ask for a small dog, Ioannidou said. “Their first question [when they call the Nicosia Dog Shelter] is usually ‘Do you have poodles?’ and if not, they ask if we have kokoni, a Greek breed that is also very popular for its similar size and temperament”.

Because demand is so high, imports of other small breeds like Maltese and Yorkshire terriers are on the rise.

“It’s funny if you think about it,” Ioannides said. “Who knows? Maybe in a few years we’ll start calling them Cyprus Maltese and Cyprus Yorkies!”

A loose confederation is not the solution