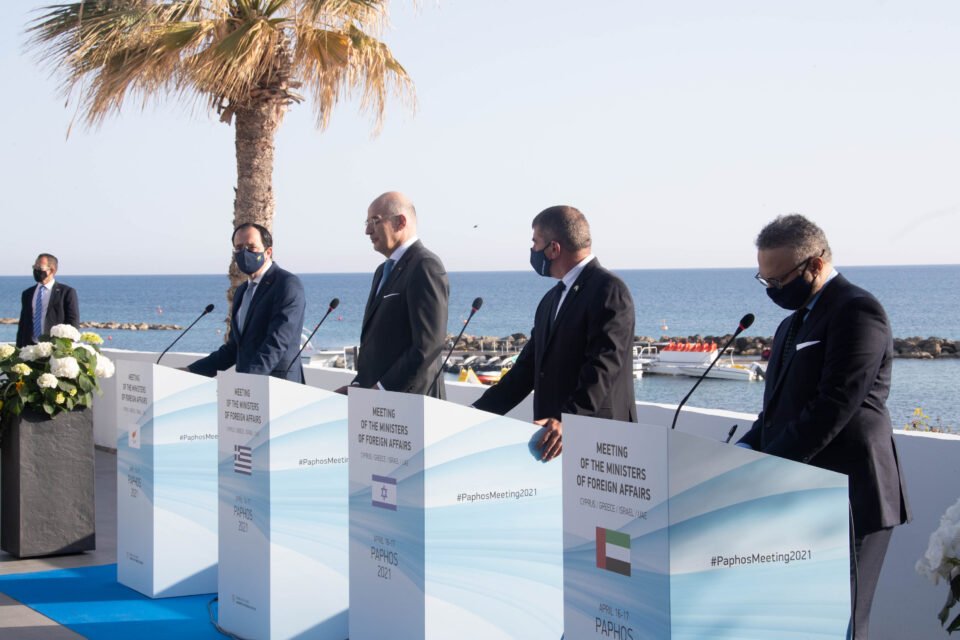 The first joint meeting between Cyprus, Greece, Israel and the United Arab Emirates, which started on Friday in Paphos (PIO)

The first joint meeting between Cyprus, Greece, Israel and the United Arab Emirates, which started on Friday in Paphos, signifies a new era for the Mediterranean, Foreign Minister Nikos Christodoulides said.

Christodoulides was joined in Paphos by foreign ministers Nikos Dendias from Greece and Gabi Ashkenazi from Israel, with Anwar Gargash filling in for Sheikh Abdullah Bin Zayed Al Nahyan from UAE, who joined on videocall.

This meeting, held by the Mediterranean Sea, is “of symbolic importance,” Christodoulides said, as it signifies a new era for the region, driven by the common vision “of the wider Eastern Mediterranean, Middle East, and Gulf as an area of stability, prosperity and peace”.

This is a path that has been paved step by step over the last few years, “and one we shall continue to walk together,” he continued, adding that the meeting exemplifies all parties’ commitment to continue fostering a frank dialogue and understanding, as it has been an opportunity to form common goals and messages.

In addition, the Cypriot foreign minister said that this new era will help dispel “the prevailing, restrictive narrative of our neighbourhood as a region of turmoil, conflict and crisis” and unfold a “radically different” one with a positive and inclusive agenda that will promote “cooperation, peace, stability and prosperity”.

He also said that he briefed them on the latest developments on the Cyprus problem, adding that “we all agreed that a reunified Cyprus must be a functional, viable sovereign state, with no foreign interference and anachronistic systems that have no place in the 21st century”.

Earlier in the day, President Nicos Anastasiades said this meeting signifies that Cyprus is a factor of stability and peace, as illustrated by our friendly relations with neighbouring states and the Gulf states.

We are doing our best to foster a feeling of security that needs to prevail all over the Mediterranean, he added. “We are trying to contribute to peace, and we are not excluding anyone. We want to convey the message to Turkey that it can participate as long as it respects international law,” he concluded.