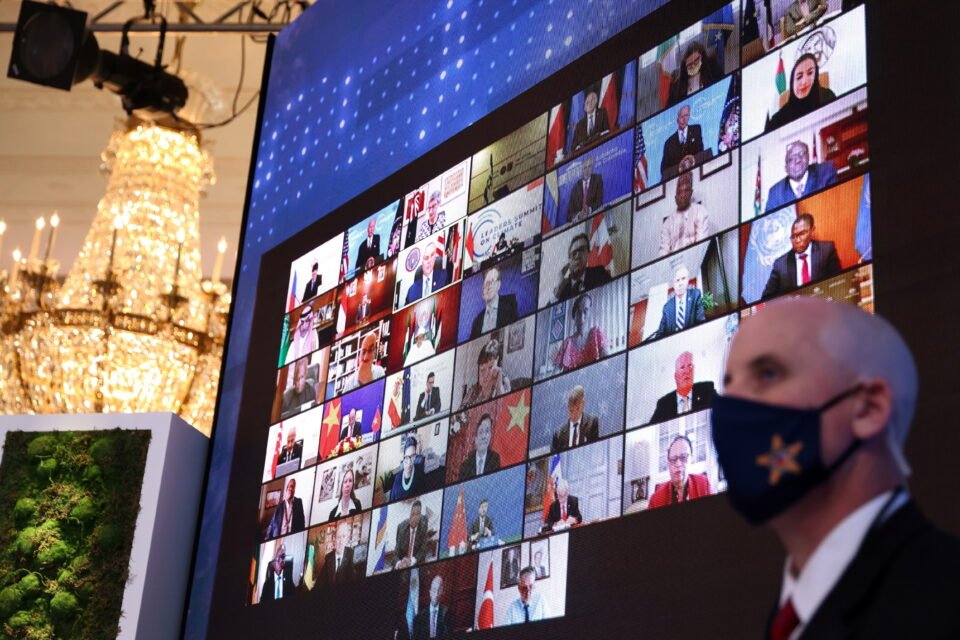 World leaders appear on a video screen during a virtual Climate Summit with world leaders in the East Room at the White House in Washington, U.S., April 23, 2021. REUTERS/Tom Brenner

As a show of global solidarity to tackle climate change the virtual summit convened by US President Joe Biden on April 22-23, appropriately chosen to coincide with Earth Day, was a great success. It was a convincing demonstration of the return of the US to climate diplomacy and its determination to reclaim global leadership.

The summit was addressed by the UN Secretary General Antonio Guterres and over 40 leaders representing all the world’s major economies and most populous countries, responsible for 80 per cent of global GDP and global emissions, including China, India, the EU, Russia, Japan, the UK, Germany, France, Brazil, Canada, Indonesia and others.

Opening the Summit, President Biden announced a new, but nonbinding, target to cut US greenhouse gas emissions (GHG) by 50-52 per cent by 2030 relative to 2005 levels. He then went on to say “That’s what we can do if we take action to build an economy that’s not only more prosperous, but healthier, fairer, and cleaner for the entire planet,” encouraging other countries to act. He said “this is the decade we must make decisions that will avoid the worst consequences of the climate crisis”.

Prior to the Summit, on April 20 the UK enshrined in law a new target to cut emissions by 78 per cent by 2035. On April 21 the European Commission and the European Parliament finally agreed to legally commit to a 55 per cent cut in emissions across the EU by 2030 and to achieve climate neutrality by 2050.

But will these be enough? Analysts estimate that to limit global warming to 1.5C – needed to prevent the worst impacts of climate change – would require at least a 50 per cent cut in GHG emissions by 2030 globally. Even after the summit pledges we are still not there. But, at least, the US is setting a good example to encourage other countries to set more ambitious climate targets.

This will require substantially more investment than the $2.3trillion infrastructure plan proposed by President Biden in early April that includes measures to cut emissions, promote clean energy and electrify the transport sector.

But it is not going to be plain sailing for Biden. There are serious challenges surrounding congressional support. Getting his climate agenda enshrined into law will require some Republican support, which is by no means assured. And looming in the background is the possibility that the Republicans return in four years with Trump or a Trump-like leader bent on dismantling Biden’s work.

Nevertheless, the Biden Administration has placed climate at the top of its agenda, so much so that after only four months into this presidency it has completely overturned Trump’s negative legacy and is propelling the US back into global leadership. The Summit message is that “the US is back” and climate is at the top of the world agenda.

Since 1950 global temperatures have increased by close to 1C. Pledges made by 197 countries under the 2015 Paris Agreement are not going far enough to limit the rise by the end of this century to 1.5C. In fact, the International Energy Agency estimates that under a ‘business as usual’ scenario global warming will exceed 3C, with devastating consequences on the world’s climate.

The Summit and actions being taken by President Biden are fast creating a momentum to redress the balance and tackle climate change globally. And with COP26 coming in November in Glasgow, these may become enshrined in an updated version of the Paris Agreement committing the world to more ambitious targets for 2030 and net-zero by 2050.

But as often happens with such summits and climate diplomacy in general, the danger is that aspirations could end up being more dramatic than real outcomes.

Much more is needed than just words to turn the climate tide round. The world needs tangible and practical measures leading to reliable and affordable energy if it is to succeed. Setting a price on carbon globally would be a good starting point. Right now just wishing oil and gas away is unworkable, particularly in developing Asia and Africa.

India Energy Minister Pradhan brought this home during an interview with the Atlantic Council a day before the Summit. He said India, as a net importer of energy, is working on improving its energy security by “continuing to use all sorts of energy.” He added “We are an emerging economy. Our priority, our strategy is different from the developed world… We will transit towards a greener and cleaner path. But looking into our affordability challenges, looking into more price sensitivity in our domestic economy… Gas, oil and coal will continue to be in India’s energy basket for a period.”

With China also intending to carry on burning coal until 2025, the US and the G20 will need to match pledges with substance if they are to get other big polluters, such as China and India, to commit to rapid decarbonisation sooner than later.

What does it all mean for Cyprus

By the end of the year Europe’s new climate targets will rachet downwards into requests for substantial revisions to existing National Energy and Climate Plans (NECP) for the period 2021-2030. Targets for emissions, energy efficiency and renewables will have to be revised quite significantly upwards.

Cyprus’ current targets are quite unambitious, but even then the NECP states that these will be difficult to achieve.

The cost of emissions under the EU’s ETS scheme has now reached €46 per tonne CO2 and is still rising. The cost of these emissions to Cyprus and to Cypriot consumers this year may approach €200million, with more every year for the next ten years, unless measures are taken to reduce emissions drastically. This cost could rise significantly if the ETS scheme is extended to include transport, now being considered by the European Commission.

For these reasons Cyprus must improve its climate targets positively and ambitiously by increasing the share of renewables and biofuels substantially.