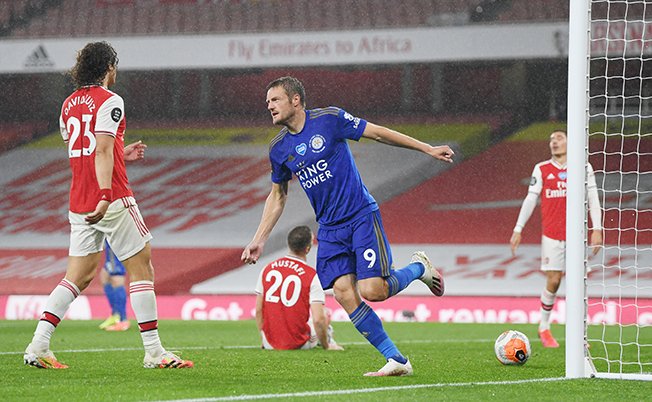 Crystal Palace manager Roy Hodgson has warned his team not to pay too much attention to Jamie Vardy’s recent lack of goals when they play Leicester on Monday.

The 34-year-old brought a recent 11-game goal drought to an end by scoring in his side’s 3-0 win over West Brom on Wednesday and has 15 goals this season in 35 appearances.

“From what I have seen, and I see some games live or I watch excerpts, Jamie is playing such an important part in Leicester’s rise. They have been so successful,” Hodgson said.

“At the weekend he didn’t score but he was a major factor in getting Leicester to the (FA Cup) final, not least the fantastic run and pass which set up the first goal. So I think you need to be careful.

“If I was working with Jamie he would probably be complaining a little bit, I am not scoring so much, I don’t see my name in the top of the scoring charts. I would be thanking him for all the work he was doing for us, thanking him for the part he was playing in the team to make certain that the team was getting the success that he was looking for.

Vardy rose up through the ranks from non-league Stocksbridge to the Premier League title and a first international call-up when Hodgson was England manager back in 2015.

“I am a great admirer of Jamie Vardy, I gave him his chance in the national team,” Hodgson said.

“He was unlucky in some respects in the fact that in the national team at the time we tended to play against teams at the time with a very, very low block defence, so there was very little space to run in behind, which of course is Jamie’s real masterpiece, so in some respects he couldn’t always necessarily use the great skill and quality he has because we didn’t play against that type of team.

“But he is an outstanding centre-forward, and (you can see) what he has done for Leicester.”

Overseas polling stations only in Athens, Thessaloniki and London