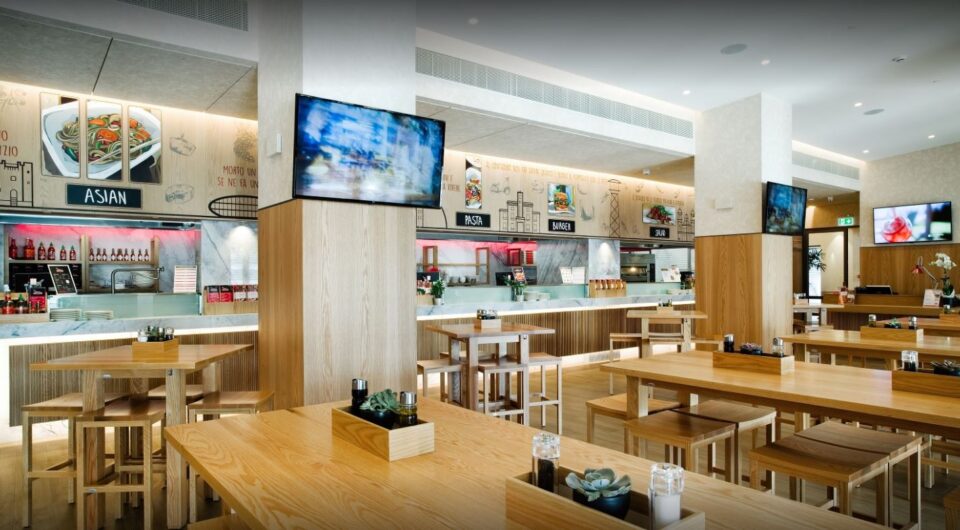 La Boca has been operating for some time in Limassol having opened its first location at the Columbia Plaza. It added a second location in Kapsalos a few years later cleverly positioning itself within walking distance of some sizable corporate businesses in the area. This secondary location is the one I visited.

Despite the strong afternoon sunshine, La Boca’s exterior area still feels like a quasi-interior space, particularly due to the roof above and the slats of glass separating the restaurant from the busy avenue beside it. While it is well staffed with fairly proactive waiters, the structure and style of its operations may catch the average Cypriot off guard.

While you are free to sit down at any available table, no waiter will come to you for an order. Instead, you need to go inside and pick up an electronic card from the cashier. Once you have your card, you can then go to the various stations around the restaurant, tapping your card each time you order something from each category of item. One pasta dish? Go to the pasta station, tap your card and order what you want. One salad? Go to the salad station and do the same. Same goes for all other categories, including the station for beverages. You also need to pick up your own cutlery, glasses and paper towels. Once you have finished eating, however, all of these items will be picked up by the waiting staff who’ll then clean your table.

While the restaurant has an Italian name and is primarily known for its pastas and pizzas, it also offers items from other cuisines to cater for as many tastes as it can. So, beyond your pasta alfredos and pizza capricciosas, it also serves salads, Asian dishes such as sweet and sour chicken and pork teriyaki, and American-style burgers.

While there is also an ice cream station inside the main restaurant area, walking to the adjacent Columbia Confectionery, itself inside the same complex and only a few feet away from the restaurant, reveals more dessert options which can then be eaten at your table. You can also pick something up for take away or order full-sized cakes to be picked up at a future date. But it is expensive, although I implore you to put in a custom order for one of their mille-feuille cakes. It is impeccable and worth every penny.

Back to the restaurant. We tried three main dishes. The first, a simple pomodoro pasta, is as easy to make as possible, but this low bar needs to be cleared nonetheless and they did so with no issues. The second was a penne arrabbiata, requested extra spicy and with the addition of tuna. All of this was accommodated, and the dish was indeed well-made and fragrant, but additions are charged, which we knew beforehand, and the additional spice that had been requested had some room for improvement. Nonetheless, both pasta dishes were nice and the pasta itself was cooked al dente style, with the traditional firmness to the bite.

We also ordered a margherita pizza as a sharing dish, with one modification. We asked for vegan cheese instead of the traditional mozzarella due to the fasting period. This was accommodated at no extra cost. The pizza base was thin and crusty, and the tomato base was as good as the sauce used in the pasta pomodoro. The vegan cheese is hard to comment on. It is frankly an acquired taste as it is much creamier in texture than actual cheese. It was fine overall and if you’re craving pizza as a vegan or during a fast then you can hardly go wrong with this option.

US, China should expand cooperation on natural gas development