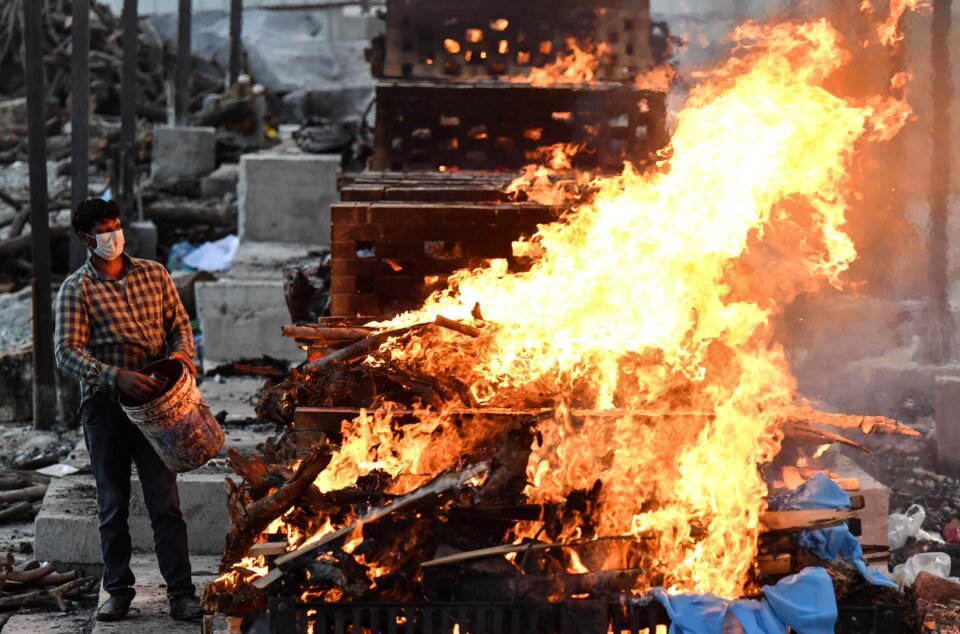 India recorded more than 4,000 COVID-19 deaths for a second straight day on Thursday as infections stayed below 400,000, and extended the interval between doses of the AstraZeneca vaccine to up to 16 weeks amid a dire shortage of shots in the country.

Experts remain unsure when numbers will peak and concern is growing about the transmissibility of the variant that is driving infections in India and spreading worldwide.

Bhramar Mukherjee, a professor of epidemiology at the University of Michigan, said most models had predicted a peak this week and that the country could be seeing signs of that trend.

Still, the number of new cases each day is large enough to overwhelm hospitals, she said on Twitter. “The key word is cautious optimism.”

The situation is particularly bad in rural areas of Uttar Pradesh, India‘s most populous state with a population of over 240 million. Television pictures have shown families weeping over the dead in rural hospitals or camping in wards to tend the sick.

Bodies have washed up in the Ganges, the river that flows through the state, as crematoriums are overwhelmed and wood for funeral pyres is in short supply.

“Official statistics give you no idea of the devastating pandemic that is raging through rural UP,” wrote well-known activist and opposition politician Yogendra Yadav in The Print.

“Widespread ignorance, lack of nearby or adequate testing facilities, official and unofficial cap on testing and inordinate delays in test reports have meant that in village after village, virtually no one has been tested, while scores of people complain of a ‘strange fever’”.

According to health ministry data, India had 362,727 new COVID-19 infections over the last 24 hours while deaths climbed by 4,120.

The second wave of infections, which erupted in February, has been accompanied by a slowdown in vaccinations, although Prime Minister Narendra Modi announced that vaccinations would be open to all adults from May 1.

Although it is the world’s largest vaccine producer, India has run low on stocks in the face of the huge demand. As of Thursday, it had fully vaccinated just over 38.2 million people, or about 2.8% of a population of about 1.35 billion, government data shows.

The health ministry on Thursday accepted a recommendation by a government panel to extend the gap between the first and second dose of the AstraZeneca vaccine made at the Serum Institute of India to 12-16 weeks, from 6-8 weeks currently.

The recommendation, aided in part by evidence from the UK, comes as India faces extreme shortage of vaccines.

There were no changes in the interval for the domestically developed Covaxin, the other shot being used in the country.

The government of most populous Uttar Pradesh said it will spend up to $1.36 billion to buy COVID-19 shots and held early talks this week with companies such as Pfizer and the local distributor of Russia’s Sputnik.

More than 2 billion doses of coronavirus vaccines will likely be available in India between August to December this year, top government advisor V.K.Paul told reporters amid criticism that the government had mishandled the vaccine plan.

Those doses would include 750 million of AstraZeneca’s vaccine, as well as 550 million doses of Covaxin, made by Bharat Biotech.

“We are going through a phase of finite supply. The entire world is going through this. It takes time to come out of this phase,” Paul said. Some consignments of the Sputnik vaccine had also arrived in the country and he was hopeful they would be available from next week, he said.

Two states – Karnataka, which includes tech hub Bengaluru, and Maharashtra, which includes Mumbai – have announced they will temporarily suspend vaccination for people aged 18-44 years as they prioritize those over 45 who need their second dose.

Maharashtra also announced that curbs on movement would be extended until the end of the month in a bid to break the chain of infections. Mostly rural Bihar in the east extended curbs until May 25.

Modi has left it to state governments to impose such curbs.

The head of the Indian Council of Medical Research, the main health agency responding to the pandemic, has told Reuters that areas with high infections had to be locked down for 6-8 weeks.

Philippines’ leader threatens those who refuse Covid-19 vaccine with jail