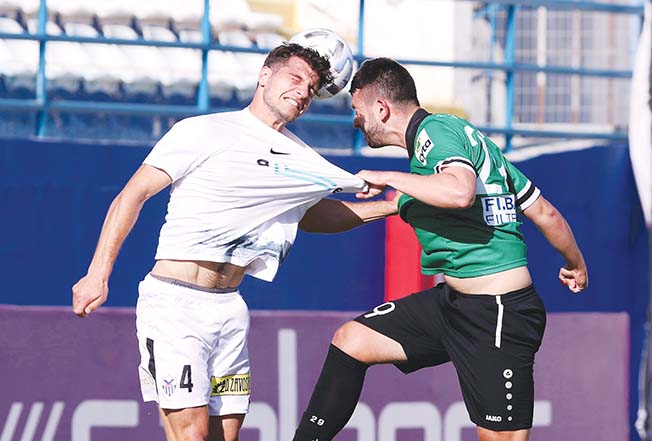 Olympiakos, who have reached the final for the first time in 30 years, face Anorthosis, who are looking to win their 11th Cyprus Cup

The Cyprus Coca-Cola Cup final between Anorthosis and Olympiakos at the GSP stadium in Nicosia on Saturday night (20.30 kick-off) will be a celebration of football in front of fans, said the president of the Cyprus Football Association George Koumas.

In a pre-match press conference, the managers and club captains underlined their desire to win the trophy, and asked supporters to enjoy the game.

“I am happy that my team and I are in the final and I’m glad that some of our fans will be there after a long time,” said Anorthosis coach Temur Ketsbaia.
“Unfortunately we cannot have more people due to the situation and I believe if we had the right to more people we would have many more in the stands.
“As a great team after many years we are in the cup final and it’s a great feeling.”

Olympiakos counterpart Cedomir Janevski said that he is very proud to be part of the occasion and thanked his players.

“In every country there are three titles, a championship, a cup and a Super Cup. We are a ‘middle-level’ team and we hope to grow and have the prospect of winning this title,” he said.
“We know this is not an easy game. We have a historic team against us, they have already won the cup ten times and we will do everything we can to win it.”

Anorthosis captain Kostakis Artymatas said the Famagusta club will try to add another trophy to their history.
“We are a historic team, full of trophies, championships and cups and we will give everything we have to win the cup and give joy to our fans,” he said.

The captain of Olympiacos, Konstantinos Sotiriou, expressed his pride in reaching the final for the first time in 30 years, saying: “We have the opportunity to win a trophy and celebrate with the fans of the team. We are very happy that the fans will come to the stadium. I hope the best team wins and that this is my team “.

Koumas, meanwhile, congratulated both clubs for reaching the 78th Cyprus Cup final.
“The holding of the Coca-Cola Cup final, with the presence of people, marks the countdown to a return to normalcy. The presence of fans in the stands is a development that fills us with joy and satisfaction but also optimism for the new day.
“This year’s final is a milestone and shows us the way to the next football season,” he said.

Koumas also reminded those who will be in the stands that they must act responsibly, adhering to the coronavirus measures and protocols, which will send a clear message that football can play a leading role in the effort of sports and society in general to return to normal.