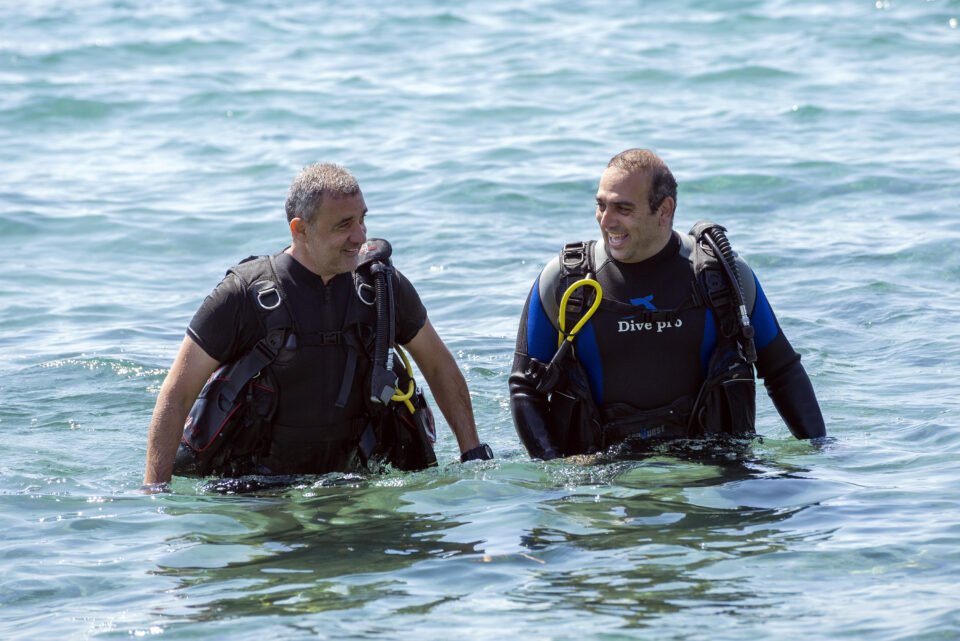 Transport Minister Yiannis Karousos dived down to the submerged ancient port of Amathus off Limassol on Saturday to promote plans to introduce diving tours at the site in the near future.

The minister, along with archaeologists of the antiquities department and the University of Cyprus’ archaeology department, swam around the ruins of the ancient port, whose construction started around the end of the 4th century BC.

An official from the fisheries department and Disy MEP Loucas Fourlas also took part in the underwater tour.

The idea is to create the island’s first-ever underwater archaeological site in ancient Amathus.

The building of the ancient port, now long under water, is believed to be related to the struggles of the successors of Alexander the Great for supremacy in the eastern Mediterranean, an official announcement said.

“The ancient port of Amathus is one of the rare cases of well-preserved remains of Hellenistic ports throughout the eastern Mediterranean and certainly unique in Cyprus,” Karousos said. He added that it is also an important underwater habitat.

He said Cyprus is moving forward with the creation of a marine archaeological park that aims to highlight and promote its cultural heritage.

“The maintenance and promotion of the site can be used both for tourism purposes and by organised groups of divers,” he said.

“All archaeological sites must be accessible, whether on the ground or underwater.”

According to the experts, the ancient site “was an impressive but short-lived large public port project of the Hellenistic period, which may never have been completed”.

The large carved rectangular stones that form the base of the three piers of the ancient port, which together with the coastline, form the basin of the port, are preserved. Its date was determined after underwater excavations carried out in the 1980s by the French Archaeological Mission of Amathus.

The antiquities department gave reassurances on Saturday that works to highlight and promote Amathus would be carried out “in a gentle way that is consistent with the character of the monument, such as cleaning, installation of ground and underwater information signs, with the aim of determining the route for visiting the area”.

Plans to introduce an underwater archaeological site, has raised environmental concerns, however, over severe damage to the protected marine plant Neptune grass. Posidonia Oceanica or Neptune grass grows vertically on the seafloor and provides habitat for other marine species including fish, molluscs, crustaceans and other plants. In Cyprus, it can also be found in Cape Greco and Akamas.

The marine plant has been called “the lungs of the Mediterranean” because it is one of the most important sources of oxygen, producing 14 to 20 litres of oxygen per square metre every day according to a study from the Mediterranean Advanced Research Institute (IMEDEA).

Authorities gave reassurances they would continue to protect the plant.

Karousos said that the ancient Amathus port, both as a grade A marine ancient monument and as a wetland, is protected according to national, European and international laws.

He also said that the sea area of the ancient port has been included in the marine protected area of artificial reefs.

The project is part of a programme entitled “diving routes in marine protected areas of the eastern Mediterranean-Development of diving tourism network” (Andikat).

Cyprus’ Department of Antiquities, the Department of Fisheries and Marine Research, the Archaeological Research Unit of the University of Cyprus, the Oceanographic Centre of the University of Cyprus, the Limassol Tourism Development and Promotion Board and Greek carriers such as the South Aegean Region, and Samos municipality, participate in the programme in the framework of the European Cross-Border Cooperation Programme Interreg Greece-Cyprus 2014-2020.