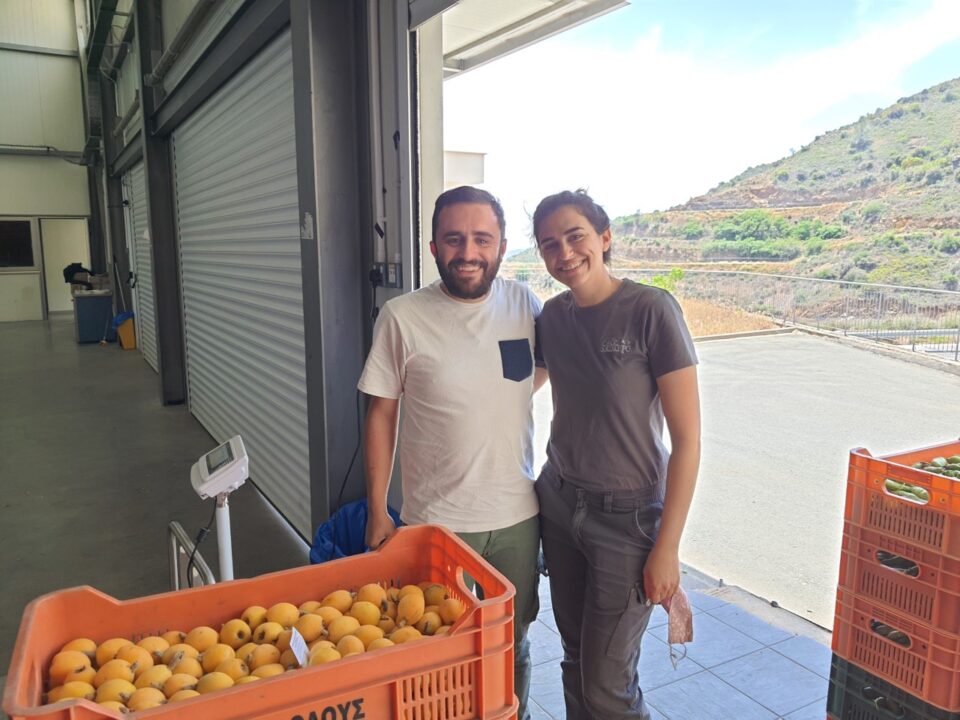 Antonis Korniotis, the direcor of the Vasiliki facility, and Maria Solomidou, plant manager at Oros Machairas

The government is keen to attract young farmers to the island’s villages. Jonathan Shkurko visits Odou, where a young community is turning the land into a thriving trade

Starting a business from scratch is among the most difficult and stressful things a person can do. And it is even more difficult if that person is young. But when that person is young and the business is related to farming and agriculture, that is when the effort can become titanic and the chances of success relatively slim. Yet with the pandemic exacerbating problems for young people looking for jobs it is becoming more common.

“After the economic crisis in 2013, all the young people in the village decided to give up trying to find a job in the city and gave themselves a chance to create something from scratch in Odou,” Valentinos Philippou, 34, deputy director at Oros Machaira honey factory in the village of Odou told the Sunday Mail.

Honey is a massive asset for Odou. The village, which stands on the foothills of Troodos, can count on the perfect climate conditions to produce honey. Every year around June, Odou hosts a honey festival, an event that attracts an ever-growing number of visitors from all over the island.

Oros Machaira has been operative since 1983, but in recent years it has flourished thanks to innovative ideas and new approaches brought in by young people, such as Philippou and Maria Solomidou, 28, the plant manager at the company.

Supporting local farmers has been a key point for the government in recent years. Recently, President Nicos Anastasiades and Agriculture Minister Costas Kadis unveiled a long-awaited €97 million support plan for the agricultural sector in Cyprus.

The plan will seek to invest in further technological development of the agricultural sector, to improve rural infrastructure and upgrade the services provided in the countryside, and to support young farmers.

Drawing young people to farming is a risky strategy, considering the relatively low appeal among a demographic that, by definition, thrives in an urban environment.

However, due to the growing difficulties for younger generations to find employment in the cities and the ongoing coronavirus pandemic that has made job-hunting even harder, the government is pushing for farming to make strides among the Cypriot youth.

When he unveiled the support plan in April, Kadis singled out Odou, where, out of around 200 inhabitants, over 70 of them are young and almost all working in the agricultural sector, to which they have brought their own ideas and new technologies.

“Odou has fertile land and plenty of water. Young people started to realise that there was an opportunity for them to be successful if they remained in the village,” Philippou said.

“Many of them took advantage of EU grants reserved for young farmers and they turned an opportunity into real business.”

According to data collected by the European Commission, only 11 per cent of all farm holdings in the European Union are run by farmers under 40 and persuading more young people to begin farming is a significant challenge.

That is why young farmers in the EU now receive additional help from income support measures in the form of the young farmer payment (YFP).

As a general rule, national authorities have to set aside up to two per cent of their total allocation of income support funding for the YFP and grant the YFP for a period of five years after the setting up of the eligible young farmers.

Kadis said that young people interested in pursuing a career in agriculture will be able to apply for a €55,000 government grant to kickstart their projects, with the possibility of an even bigger sum should they present innovative ideas for farming in mountainous areas.

“Aside from the grants, most young people have studied either in Cyprus or abroad, so they introduced new technologies to farming. This has had a huge impact on the sector and sales have skyrocketed in recent years,” Philippou said.

Solomidou added that attracting visitors to the farms and the factories and stimulating their curiosity is also part of a new strategy aimed especially at younger generations.

“We finished building our new honey production plant in February 2020. We tried to make it both functional and attractive to visitors, combining innovation in the actual production of honey and marketing, so that we can promote it more and better,” she said.

Like Philippou, Solomidou also noticed a generational shift in Odou as far as farming is concerned.

“People now aged between 40 and 50 had to the leave the village when they were younger to go find jobs in the cities. There were no jobs here.

“Now their sons and daughters are coming back. They realised that there are not many opportunities for young people in the cities, so they decided to start their own thing here. It was and it still is a risky choice, but it seems that is paying off.”

However, Solomidou also said that most young people involved in farming in Odou have to work two jobs to make ends meet.

“Farming is highly volatile and profits heavily depend on many factors, such as the weather, the market and many other variables, like the Covid-19 pandemic, which undeniably affected our plans and profits this year.

“Usually, the second go-to-job for people who want to remain in the agriculture sector, is tomato farming, which is usually a reliable source of money.

“But I also know young people whose second job is unrelated to the agriculture sector. It’s all about adaptability,” Solomidou said.

Aside from honey, Odou farmers are also involved in the production of Cypriot cheeses halloumi and anari, the popularity of both of which locally and abroad is on the rise.

“All farmers in the village, whether they produce honey or cheese or grow tomatoes, have one thing in common and that is an obsession for quality,” Solomidou said.

“We are not producing in massive numbers, but what we make is of the utmost quality and the consumers always realises it.”

Solomidou added that the government played a big role in helping young farmers remain in the village. Aside from the support plans of the agriculture ministry, the deputy ministry of tourism also helped putting Odou on the map.

“Like rural Limassol and Paphos are known for their wine, rural Larnaca is now known as the land of honey and the deputy ministry of tourism did a lot in that aspect to promote the area,” Solomidou said.

“All that work does not just help us farmers, but also other businesses, such as cafés who collaborate with honey farmers and sell their products in their shops, or restaurants that create dishes using local honey.”

Young farmers in Odou can also count on a shared common space, called Vasiliki, where they can take their products and put them on display for potential buyers, usually businesses.

The idea of creating a unique display location for local products in the village came to fruition in 2006, but it was only recently that it picked up and became more than a business hub and turned into a communal space for young locals working in the same sector, where they can share ideas and potential solutions to various issues that might arise.

“Most young people’s decision to remain in the village was somehow imposed by the economic conditions, especially harsh for new generations after the economic crisis,” Antonis Korniotis, 31, the director of the Vasiliki communal facility, told the Sunday Mail.

“Nevertheless, we managed to turn an issue into an asset and the results speak for themselves.

“Not only are we making bigger profits from our products then we would have if we chose to move the city, but we also enjoy what I think is a better lifestyle, within a small community where everyone helps the other.

“It’s hard work, even after we brought technical innovations and new ideas to the way we carry out our businesses in Odou, but at the end of the day we are all satisfied and happy with the work we’ve done,” Korniotis said.

He also added that the current government has managed to understand the needs and the issue that young farmers might encounter and has indeed taken steps to both improve the sector and attract future generations to it.

“These things go a long way, young generations are finally able to understand that a career in farming or in agriculture is not a plan B, but a real, solid choice, one from which they can profit both economically and on a human perspective,” Korniotis said.

“Odou is one big family, with its ups and our downs, our issues and our worries. But I wouldn’t change it for anything in the world.”