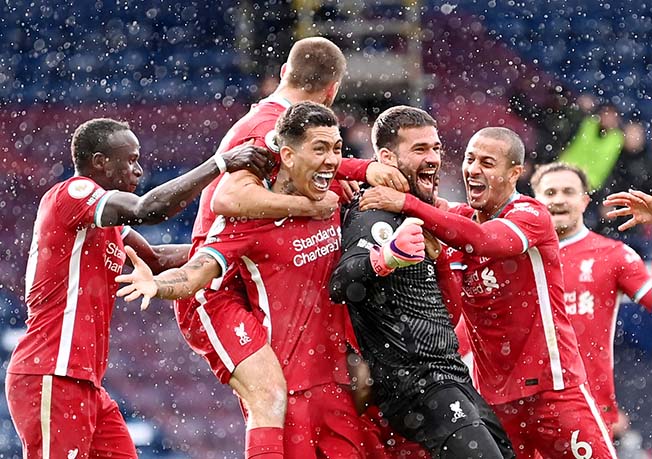 Goalkeeper Alisson Becker scored in the fifth minute of stoppage-time as Liverpool snatched a 2-1 victory at the death against relegated West Bromwich Albion at The Hawthorns on Sunday.

Alisson headed home from a corner to secure what could be a precious three points for Liverpool in their bid to qualify for the Champions League next season.

They stay in fifth place on 63 points from 36 games, one behind Chelsea in the fourth and final qualification position. Leicester City are in third on 66 points with the latter two to meet on Tuesday.

Striker Hal Robson-Kanu had scored in his first Premier League start in three-and-a-half years to give West Brom the lead, but Mohamed Salah equalised for the visitors to move level with Tottenham Hotspur forward Harry Kane on 22 Premier League goals for the season.

Both sides missed opportunities to add to their score, but it was Alisson’s incredible late winner that clinched a precious victory for the visitors.

TOTTENHAM 2-0 WOVES
Tottenham Hotspur’s England striker Harry Kane scored his 22nd Premier League goal of the season to help his side to a 2-0 home win over Wolverhampton Wanderers on Sunday which boosted their bid to secure European football for next season.

After Kane’s late first-half strike, Pierre-Emile Hojbjerg grabbed Spurs’ second just past the hour to seal a victory which lifted Ryan Mason’s team to sixth in the standings.

The performance was a vast improvement from Tottenham’s defeat at Leeds United last week, including a promising afternoon from Dele Alli who showcased his attacking skills and tricks as well as getting stuck in with defensive duties.

“We are not happy with where we are, we should be higher and we only have ourselves to blame,” Alli, who fell out of favour under previous manager Jose Mourinho, told Sky Sports.

“We are showing now what we can do but it is a bit too late. We just have to keep working hard and take it into the next season as well.”

Spurs are in sixth place with 59 points, five adrift of London rivals Chelsea in fourth and four points behind fifth-placed Liverpool, who beat West Bromwich Albion 2-1 away on Sunday, with two matches left. Wolves remain in 12th spot.

CRYSTAL PALACE 3-2 ASTON VILLA
Crystal Palace struck twice in the second half through forward Wilfried Zaha and left back Tyrick Mitchell to secure a 3-2 win over Aston Villa in an entertaining Premier League match at Selhurst Park on Sunday.

Defender Mitchell bundled the ball home in the 84th minute from Eberechi Eze’s effort to make it 3-2, after Zaha charged towards the Villa box and blasted home an effort which flew in off Ahmed El Mohamady with 15 minutes remaining.

Villa forward Anwar El-Ghazi had made it 2-1 to the visitors in the first half after skipper John McGinn’s side-footed opener was cancelled out by Christian Benteke’s header.

The result denied Villa a first league double over Palace since the 1980-81 season, when the Birmingham-based side won the top-flight title.