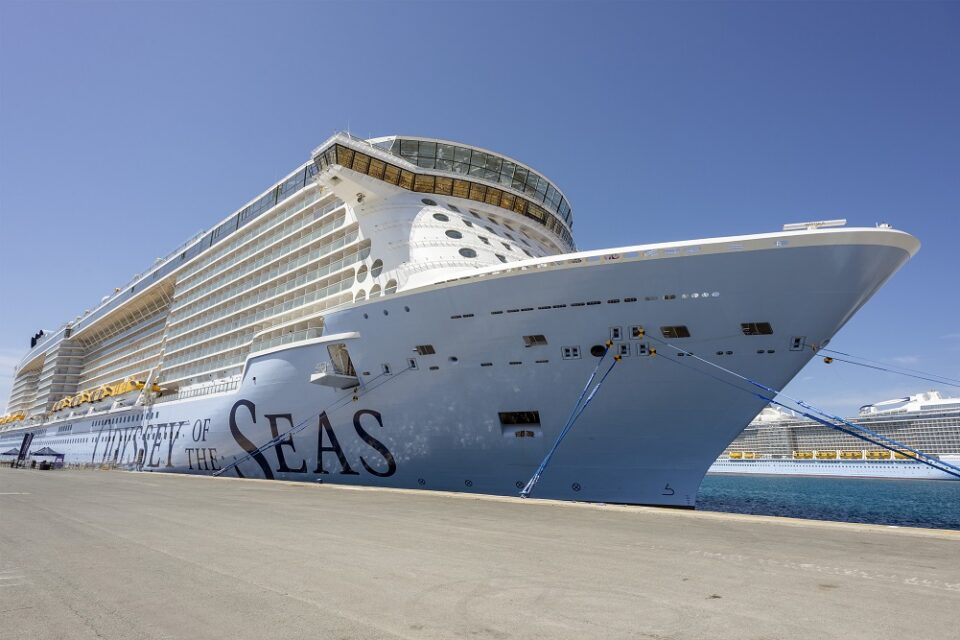 The Odyssey of the Seas at Limassol Port (CNA)

Officials on Sunday welcomed the decision by cruise lines to include Cyprus in their summer programmes and use port services, which, they said, is a giant boost to the country’s tourism product and economy.

The minister of transport, along with the deputy ministers for tourism and shipping, the head of Pasyxe hoteliers’ association and Disy leader Averof Neophytou visited in the morning the Royal Caribbean’s ‘Odyssey of the Seas’, which is currently at the Limassol port. The vessel, which was scheduled to run a new line from Israel to Greece and Cyprus from next month, is to leave the area after Royal Caribbean cancelled the cruise schedule citing regional security concerns.

The Royal Caribbean has already announced that another of its vessels, the Jewel of the Seas, will be sailing seven-night cruises from Limassol from July.

Starting July 10, the vessel will start sailing from Limassol to Athens, Greece and the Greek islands of Rhodes, Crete, Mykonos and Santorini through October. This is the first time a Royal Caribbean ship has called Cyprus its homeport.

Christos Karavos, manager for Europe for Royal Caribbean, said that after consultations with the Cypriot authorities the company also decided to receive services from the port of Limassol for its cruise ships Odyssey of the Seas and Anthem of the Seas.

“The Cypriot economy will benefit (from proceeds to the tune of) around 70 to 80 million from the activities of our company,” Karavos said.

According to Deputy Minister for Tourism, Savvas Perdios, if one calculates all the benefits of these activities – hotels, supplies, crew changes and services – the Cypriot economy will receive a boost of more than €70 m just from this four-to-five-month programme that starts in July.

He said that consultations with Royal Caribbean started six to seven months ago. “It is fortunate and a great deal that, finally, this massive company, the largest in the world, with the best and largest cruise ships, will have Cyprus as its base,” he said.

The importance of the choice of Cyprus lies, according to Perdios, in the fact that the country now receives a lot of advertising abroad, and this was very important for reintroducing the country’s tourism, “to change the image that someone has abroad for Cyprus.”

He expressed the conviction that the benefits from servicing cruise ships will continue in the coming years and that Cyprus will become the base for many companies.

Deputy Minister for Shipping, Vasilis Demetriades said that Cyprus is now capitalising on the effort launched some 15 months ago, with crew changes.

“The facilities provided by Cyprus since the beginning of the pandemic, to facilitate the crews, the repatriation of seafarers, have, to a significant degree, brought this result,” Demetriades said.

Though there are ships that have not included Cyprus in their itineraries, they choose to come to Cyprus to be served, he added.

This in itself, he added, has brought significant benefits to the local economy. He expressed the hope that Cyprus will become a centre for crew changes in the coming years.

“The services in Cyprus were excellent and we feel so welcome,” said the captain of the Odyssey of the Seas, Sindre Borsheim.

“We have a port where we could easily bring our crew, while we still follow all the protocols, we are safe and we feel healthy,” he said. 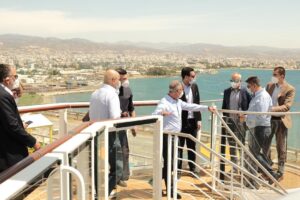 The captain said it has been a difficult year for the cruise industry but that cruises are slowly resuming on strict protocols and with a certain percentage of passenger capacity, which will increase over time.

His cruise ship, however, due to the situation in Israel, will have to postpone its line for now.

Royal Caribbean announced late on Saturday that due to the unrest in Israel and the region, the Odyssey has not been able to complete the preparations required. The sailings out of Haifa port would have been the first for the Odyssey of the Seas, and were intended to exploit a travel corridor being set up among Israel, Cyprus and Greece, for travellers vaccinated against Covid-19.

The ship will spend its inaugural season in Florida, the statement said, adding that it “remains hopeful to return to this popular destination (Israel) with its ships in the future”.

Transport Minister Yiannis Karousos, said that Cyprus, due to the proper preparation it has made has sent a very positive message to the companies active in the field of cruises, resulting in the attraction of two large companies (Royal Caribbean and Celestyal Cruises ) which are preparing to start cruises based in Cyprus and the port of Limassol.

This, he noted, is very important for the economy and tourism.