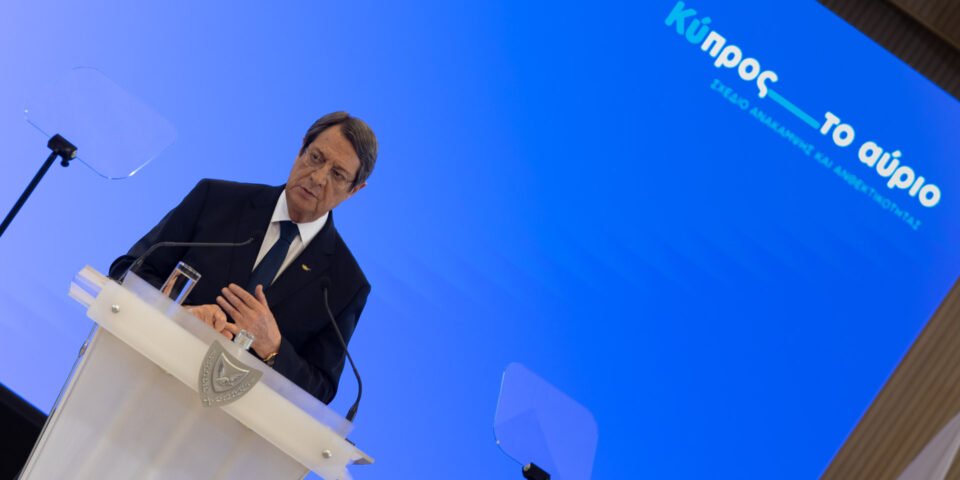 President Nicos Anastasiades unveiled the government’s recovery and resilience plan on Monday, the objective of which, he said, was not just the recovery of the economy but the creation of a new vision for Cyprus.

Dubbed, Cyprus Tomorrow, “the scheme is the roadmap for the post Covid era,” the president said during a news conference at the presidential palace. “It concerns tomorrow’s Cyprus, the country’s new version.”

The scheme will be funded through €1.2bn from the EU’s Recovery and Resilience Facility, €1.8bn from the Policy Coherence Fund, and €1.4bn from private investment or private-public partnerships.

“It is a comprehensive economic and social transformation. It leads the economy, technology, mentality, and institutions, into a new era,” the president said.

Through the scheme, the government seeks to promote Cyprus as a country with high levels of resilience, productivity, and competitiveness through a viable model of long-term development.

A country where the education system and workforce development are in line with the skills required in the future, placing it among the pioneers in the green and digital transition.

Anastasiades said it also aimed at creating a strong health system, a welfare state that will further strengthen the protective net for those in need.

“A rule of law state, of transparency and accountability, with strong mechanisms to stamp out corruption,” he added.

The scheme will be based on five pillars relating to public health, transition to a green economy, boosting resilience and competitiveness, the course to the digital era, employment, education, and human resources.

The president said emphasis will be given on further strengthening and upgrading public and private hospitals based on the lessons learned from the pandemic.

The government will also promote reforms and investments linked with the climate and energy, sustainable transports, water resource and environmental management in general.

“There are plans whose implementation will improve living conditions and create a better environment at home, in the neighbourhood, and our country in general,” Anastasiades said.

The third pillar concerns strengthening the resilience and competitiveness of the economy, including broadening the productive base, boosting research and innovation, and improving competitiveness through digital transformation.

The fourth pillar, the president said, it part of the broader policy of digital transformation and includes reforms and investments aimed at upgrading connectivity infrastructure and advancing electronic governance.

The fifth pillar concentrates on employment, education, and human resources and will see efforts to tackle the lack of skilled labour, the introduction of a new system of teacher evaluations, extending free mandatory education to the age of four, digital transformation of schools, and the creation of two technical schools in Larnaca and Limassol.

“After running out of all other means to rally its voters, Disy has resorted to the oldest pre-election tactic in the book – making promises,” Akel’s Stephanos Stephanou said, commenting on the plan.

In its eight years in power, he added, Disy has brought Cyprus “to the brink of division”, exposing the country internationally through the passport scandal and reducing quality of life to the third worse in Europe.

In a written response, government spokesman Kyriakos Koushos called on Akel to stop underestimating the intelligence of the public, commenting that “Akel seems to forget the state of the country it handed over to the current president in 2013”.

“Let us remind Akel that it was the Anastasiades government that led the country out of the memorandum and restored the economy to above EU average,” Koushos said.

“It was the Anastasiades government that, amid the unprecedented times of the coronavirus pandemic, was able to offer help worth €2bn to vulnerable groups and small businesses while protecting jobs.”

He added that Akel’s “disastrous” time in power was remedied by Disy’s prudent fiscal policy and hard work, and the public’s sacrifices, which reversed the “sad numbers Akel left in its trail”.

The public have paid the price of Akel’s failed policies and know what the Anastasiades government has achieved and can offer to the country, Koushos concluded.

The state of affairs