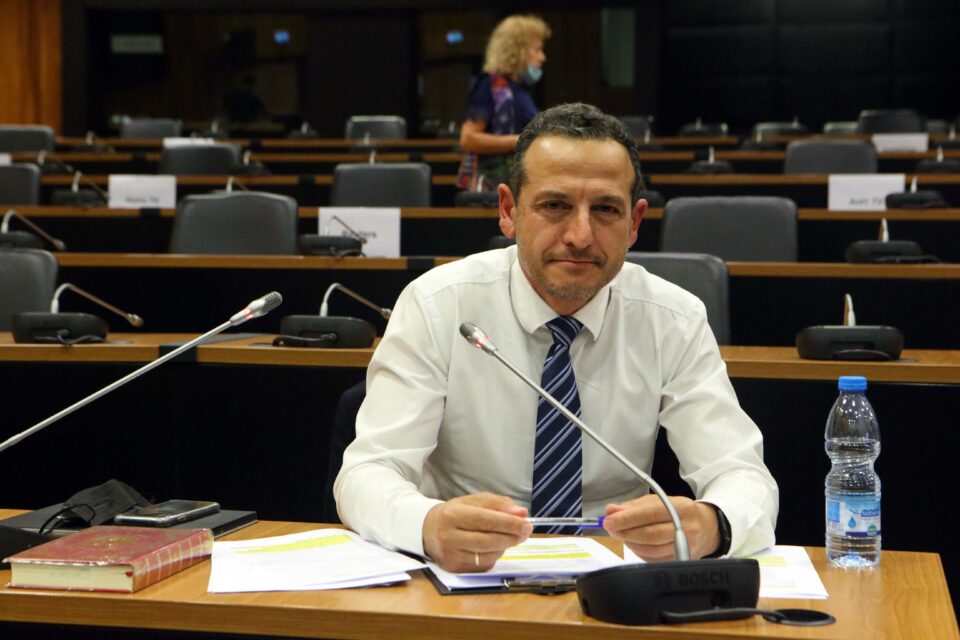 Demetris Demetriades at the inquiry on Tuesday (Christos Theodorides)

The brother of former Transport Minister Marios Demetriades on Tuesday flatly denied the latter had anything to do with applications filed by their family’s law firm on behalf of foreign nationals seeking a Cypriot passport or permanent residence under the now-defunct citizenship-by-investment programme.

Demetris Demetriades was testifying under oath before a panel investigating the controversial passports scheme which the government shut down late last year after a series of damning revelations by the al Jazeera news network.

The witness’ brother, minister of transport from March 2014 to February 2018, had taken part in several meetings of the cabinet that gave the final nod to citizenships, including for a number of applications filed by the law firm in question – Andreas Demetriades & Co LLC, based in Paphos.

But the witness denied his brother influenced any of these decisions.

“Let’s start with the basics: Marios Demetriades is not a lawyer, nor a partner in the law firm. We never had a professional association,” he told the committee of inquiry.

“I wish to be clear and categorical – there was never any favouritism from Marios Demetriades nor any other politician in naturalisation cases of our law firm.”

He went on to claim that “either way, no particular discussion occurred about the naturalisations at the cabinet.”

Answering questions from the panel, Demetriades said his law firm would charge clients anywhere from €15,000 to €18,000, plus €2,000 per dependent.

His firm represented Chinese clients who preferred investments in real estate in order to gain residency in Cyprus.

“They knew us in China, and what I want to say is that 78 per cent of applications by investors we represented hailed either from the Chinese mainland or Hong Kong, of whom 95 per cent invested in real estate.”

The vast majority of these clients, he added, still keep the residential units they purchased in Cyprus, as they consider the island an “excellent destination where they can set up base.”

The witness also denied that his law firm promoted or collaborated with any land developer in particular.

He said that over the last six months they have received six letters regarding citizenship cases which could not proceed, whereas seven applications in total have been rejected since 2014.

The grounds for rejection had nothing to do with the applicants not meeting the criteria. Five of these applicants were taking legal recourse against the Republic of Cyprus.

In another case, the applicant faced civil litigation in their home country.

The Andreas Demetriades & Co LLC firm was registered with the official providers registry since the latter’s creation in 2018.

But according to the findings of an interim report by the panel, the former transport minister ought to have recused himself from cabinet meetings where decisions were taken (by vote) on granting citizenships.

The report states that during Marios Demetriades’ stint as minister, the cabinet green-lit 137 naturalisations where the provider was the law firm linked to his family.

During these cabinet sessions, Demetriades did not waive the right to vote.

The otherwise heavily redacted dossier further noted that the cabinet operated “in violation of the principles of natural justice, which provide that no one should be a judge in their own cause.” Namely, despite the fact that a code of ethics had existed since 2013, it was not being adhered to.

As a result, cabinet members as well as the president – chairing cabinet meetings but without voting rights – were not informed on the identity of the service providers/promoters when approving naturalisations.

The service providers/promoters were companies – like law firms and accounting firms – facilitating foreign investors in applying for citizenship.

Without this information on the providers, the report stated, cabinet members “would not declare any direct or indirect interest in the affair, and thus not recuse themselves, as they ought to.”

Some have suggested this arrangement gave cabinet members plausible deniability.

Also on Tuesday the panel heard from Michalis Michael, chairman of the board of directors of the Cyprus Investment Promotion Agency (Cipa).

Michael was asked how exactly the passports programme was advertised overseas, and why it took 11 years before steps were taken to stop the providers from advertising in conferences abroad.

Finally in early January 2018 the cabinet introduced a code of conduct for the providers.

It’s understood that Michael will be the last witness to appear before the committee.

The panel will then adjourn to study the evidence and testimony, and compile a final report that it will submit to the attorney-general. Media reports say this could happen in early June.

The committee of inquiry’s findings are not legally binding.

But earlier this month the attorney-general’s office filed the first prosecution relating to the passports programme.

It is based on the findings of an ad hoc three-member panel headed by Securities and Exchange Commission chief Demetra Kalogerou.

MPs taken to task over stance on green issues