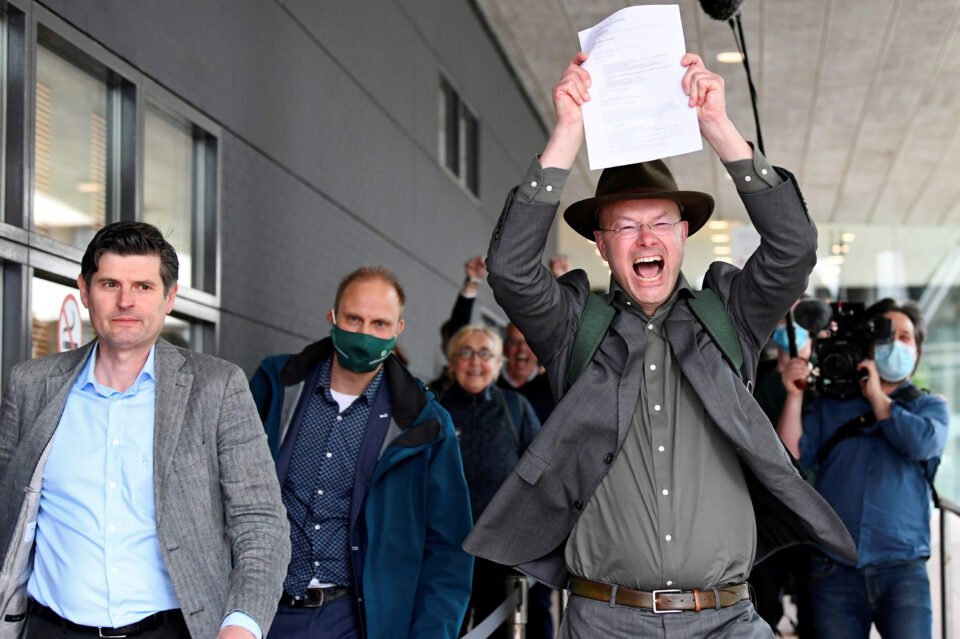 Donald Pols, Director of Friends of the Earth reacts holding a copy of a verdict in a case brought on against Shell by environmentalist and human rights groups

The oil and gas sector was shaken this past week. There were some monumental developments which could have a major impact on the future operations of the international oil companies (IOCs). Developments that promise to herald a decisive move towards green energy, transforming the IOCs. They may never again be the same.

A court in the Netherlands ordered Shell to aggressively cut emissions – not just resulting from its operations but also from the use of the oil and gas it sells – by 45 per cent by 2030 compared to 2019 levels, much harder and faster than planned. Just to remind ourselves, Shell, along with BP, has been at the forefront of embracing climate change. But evidently this is not enough. Activists are driving for much faster change and, as this week has shown, they are winning the argument.

Shareholders backed activist investors at ExxonMobil’s annual general meeting, who won two board seats, promising to force diversification beyond oil and to fight climate change. Chevron shareholders approved a proposal to force the company to substantially cut pollution produced by the products it sells.

One campaigner went as far as to say “This will be seen in retrospect as the day when everything changed for Big Oil.”

In order to achieve carbon emissions at this scale, the IOCs will be forced to make substantial cuts to their oil and gas production and divert future investments decisively into other, cleaner, forms of energy. These changes will have major impact on their operations worldwide, including in the East Med and in Cyprus’ EEZ.

The ruling was made by a district court in the Hague that concluded that Shell needs to do more to cut emissions from its products. Shell announced that it plans to appeal the decision, but in the meanwhile it is required to comply. It is estimated that it may have to cut oil and gas production by 3 per cent per year.

The judge said that said “Shell’s existing climate strategy was not concrete enough and that there was a human rights obligation on the company to take further action.” Shell “must do more than monitoring developments in society and complying with the regulations in the countries where the Shell group operates”.

The importance of this ruling is not just the impact it will have on Shell’s future operations, but it opens the gates for more, similar, court actions by activists determined to bring about more, far-reaching, change. Such actions and lawsuits are likely to extend beyond the IOCs, and may be directed against all heavy emitters. They will all have to accelerate their decarbonisation plans.

It is estimated that currently there are 1,800 lawsuits related to climate change worldwide. The decision against Shell marks a new assertion of judicial authority in climate change – at least in Europe – and is bound to act as a point of reference, moving the goalposts further in favour of activists.

This past week both suffered major shareholder rebellions over climate change.

The significance on ExxonMobil’s shareholder decision, is that ExxonMobil is the biggest independent oil company globally and so far has been resisting change, unlike BP and Shell. This breakthrough vote puts climate change at the heart of the company and the oil industry.

Responding to the shareholder vote, ExxonMobil’s CEO, Darren Woods, said he had “heard from shareholders about their desire to catalyse changes… and we are well positioned to respond.”

Similarly, Chevron faces major change. The immediate response by the company is that it will “carefully consider” the vote of its shareholders. But while it promises to make its business greener, it still plans to do so by boosting returns. Its target is for “higher returns and lower carbon.” It plans to reduce capital expenditure in oil and gas, to almost half in comparison to earlier years, concentrating on large projects with high returns and investing more in clean energy.

IOC shareholders – and activists – are now emboldened by these developments, which are bound to make them more determined to drive for even more change. They will no longer stand on the sidelines. For them the message is clear ‘energy transition is happening and there’s no turning back’.

These developments followed publication last week by the International Energy Agency (IEA) of a ‘Roadmap to Net-Zero’, in which IEA states that no new oil and gas projects should be developed beyond 2025, if the world is to reduce emissions sufficiently to prevent global warming. Clearly a growing number of IOC shareholders agree with this, asking for more drastic action to be taken to combat climate change.

This was a week of reckoning for an oil and gas industry already struggling over how to deal with climate change. It is clear that winds of change are blowing through the entire oil and gas industry that so far has been seen to have been slow, or reluctant, to embrace climate change. Massive shifts in clean technologies, government regulations and consumers demand a stronger strategic response. This is about to start happening, at least in the western world.

But Asia does not appear to be ready to follow. Globally, demand for hydrocarbons continues to be robust and this will not change that for some time yet. As Ben van Beurden, Shell’s CEO said, if the IOCs do not supply this oil and gas, someone else will. National oil companies (NOCs), such as Saudi Aramco and Rosneft, are ready to step in and do exactly that.

Demand for oil and gas will continue and exploration will still be important for a while yet. Energy transition will not happen overnight. But as a result of these developments the IOCs are likely to be spending less, with the risk that later this decade supply shortages may lead to higher prices. The trend for IOCs will be contraction to core regions and larger projects, with less appetite to take on new areas.

As operations, exploration and production in the East Med – and in Cyprus’ EEZ – are led by the IOCs, these developments are bound to have a ripple effect. They are bound to affect future investments and plans substantially. The region needs to wake-up to this fast-evolving situation and adjust accordingly.

A night of pop and opera