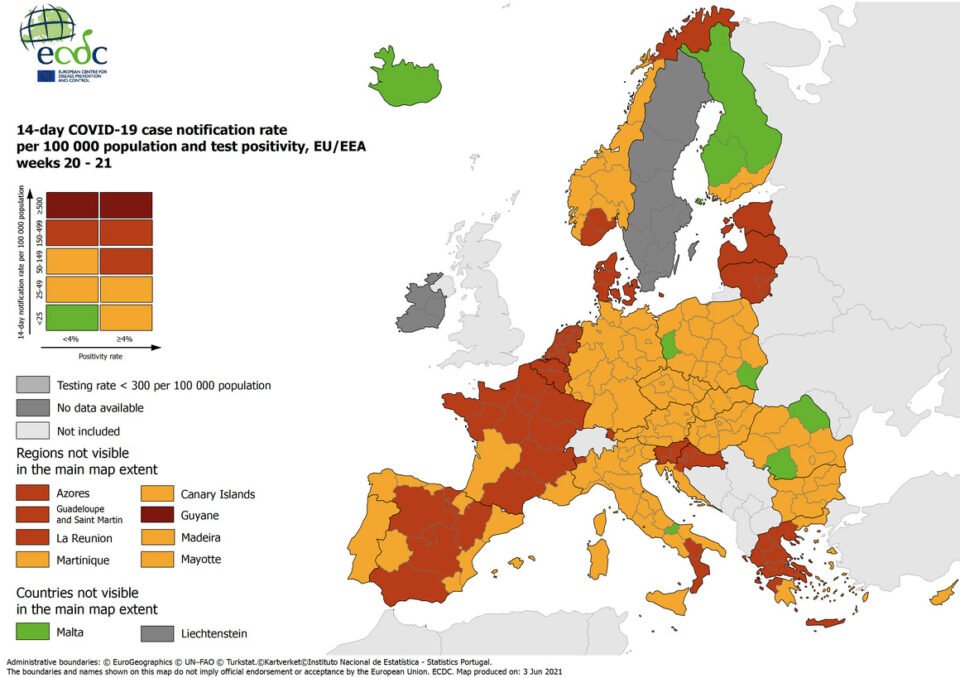 Cyprus has moved into the ECDC’s orange category as the 14-day cumulative diagnosis rate dropped to 130 per 100,000 residents, the ministry of health said on Friday.

A total of 1,154 positive coronavirus cases were recorded between May 19 and June 1, with the cumulative diagnosis rate falling to 130 from 218.6 per 100,000 population in the previous 14 days, the weekly epidemiological report by the health ministry showed.

However, for the country to enter the European Centre for Disease Prevention and Control (ECDC) green category, the 14-day cumulative rate must be lower than 25 cases per 100,000 and the test positivity rate below 4 per cent.

Despite the lifting of measures and resumption of social activities, people must remain careful and abide by the measures to maintain the improved epidemiological picture, the health ministry reiterated.

The majority of the cases, 68.7 per cent, were among people aged 20 to 59 while only 108 people aged 60 and older tested positive in the last 14 days, the report added. The remaining 252 cases concerned people under the age of 19, while no data was available for one case.

The median age of the adult cases is 35.

Limassol accounted for 38.1 per cent of the new cases, Nicosia for 31.2 per cent, Larnaca 12.8, Famagusta 9.5 per cent and Paphos 4.5 per cent. Another 3.9 per cent of the cases were traced in the British bases or were people who live permanently abroad.

Meanwhile, 30.8 per cent did not report any symptoms at diagnosis.

Hospitals across the island were treating 66 people for Covid-19 as of June 2 according to the report, with an average age of 65 years. Most patients, 41, have pre-existing health problems. For the same period, 19 people were in the ICU, including ten with pre-existing conditions.

Since the start of the pandemic outbreak, 362 people have died from coronavirus with the Covid-19 associated mortality being 40.7 per 100,000 population. The men to women ratio is 2:1.