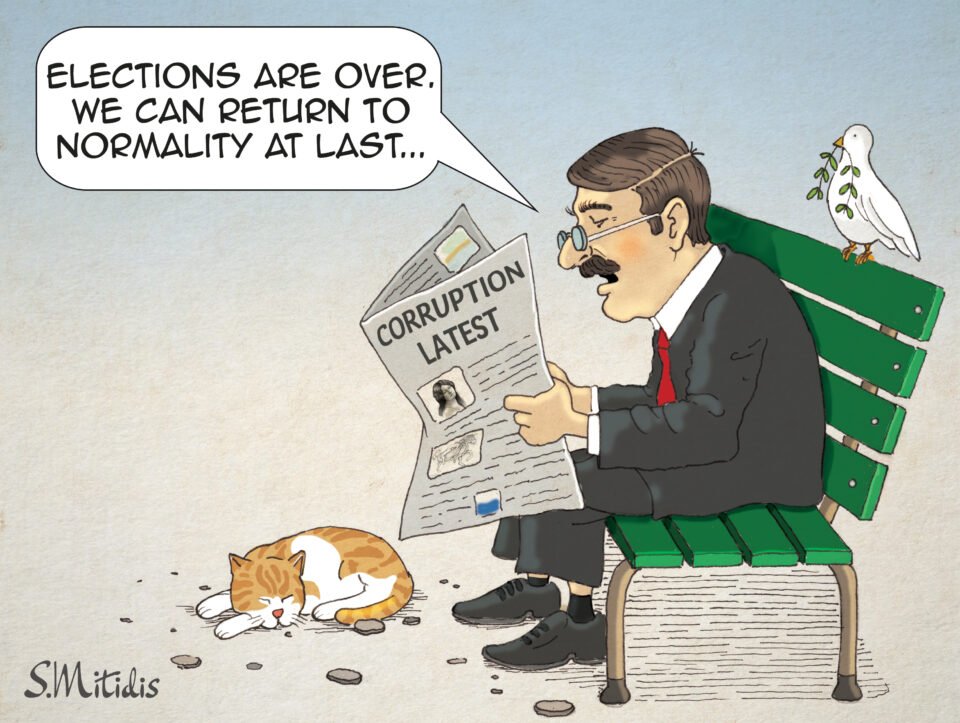 BY FAR the most irritatingly tedious part of a parliamentary election is the subsequent horse-trading of the political parties over who to elect House president. It’s a ceremonial position even if the speaker is number two in the state hierarchy, thanks to our liberal interpretation of the 1960 constitution which featured an actual vice president.

In the last week the main news story has been about who will be the president of the new House, as if anyone cares. The recurrent joke in these non-stories is the assertion by each party that it will not engage in any haggling and wheeler dealing. The fact is they will be doing nothing else until Thursday afternoon when the new deputies are sworn in and vote for the speaker.

So far, the leaders of Elam and the Greens have announced they would stand, presumably as principled no-hopers given that the former is guaranteed four votes and the latter three. Having declared it would not engage in haggling, on Friday Disy surprised everyone by announcing its vice president Annita Demetriou as its candidate for the post.

If elected she would make history. She would not only be the first woman, but also the first blonde, the first Larnaca deputy and the first Disy deputy in the history of Kyproulla to be House president. She would also be the most presentable but that does not qualify as historical fact.

IT IS unclear whether Prez Nik gave his blessing to this decision, or whether it had been rushed through by the wily Averof in order to pre-empt any interference by him. The last time Nik imposed his wishes on the party it ended in the fiasco of electing Demetris Syllouris whose televised winking shamed our Kyproulla internationally.

For those that do not remember, in 2016 the Disy leadership was negotiating doing a deal with another party, but Nik decided Disy should back Syllouris. There was resistance from the party, which felt it could not back a former Disy member who had jumped ship, joined a new party and constantly attacked them in the previous 10 years.

But Nik insisted and Disy eventually complied. His reasons for zealously championing Syllouris for House president were never explained, not even after his man was filmed acting as a salesman for an Akel developer who wanted to arrange a passport for someone with a criminal past.

A source at the presidential palace informed me that it was because Syllouris had promised Nik he would introduce a strict code of ethics for deputies, a promise he delivered.

THIS notorious code of ethics had no provision about deputies not pursuing their self-interest through legislation, but it was understandable considering it was the winking Syllouris who drafted it.

How else can we describe the laws relating to the pay and pensions of deputies as other than self-serving? After two terms in the House, a deputy is entitled to a monthly pension of €3,720 and a retirement bonus of €208,530. No other public employee that works full-time, instead of a few hours a week like a deputy, would get such a pension and bonus for 10 years of part-time service. And pension payment starts at 60 in contrast to the rest of the population for whom it starts at 65.

And there is more self-serving legislation. A deputy receives €1,025 per month for employing a secretary that none of them employs because they all have a parliamentary assistant paid for by the state. Apart from this, they also receive a monthly expense allowance of €1,708. Both these allowances go into the calculation of the pension, in contrast to the rest of the population.

You just wonder if when deputies are sworn in, the oath they take obliges them to place maximising their income for serving the public above everything else.

NO SURPRISE that the son and heir of Comrade Tof, Christos was elected deputy for Kyrenia, taking the seat of the moderate Akelite Eleni Mavrou.

Comrade Christos, who made his mark demonstrating outside the House some 10 years ago when it was voting on a bill tabled by his father’s government aimed at saving the near-bankrupt state some money, is a fully-paid up member of the loony left. He is a more devout Marxist-Leninist than his comrade father was.

Speaking on Politis radio, Comrade Christos declared that it was not the Marxist-Leninist ideology of the party that led to its piss-poor showing in the parliamentary elections, in which it received its lowest ever number of votes. I lost my concentration when he recounted the reasons, but I will repeat his soundbite, quoted by Costas Constantinou in Politis, for the record, because it says it all:

THE MINISTER of commerce and the Consumer Protection Service have come under attack from the Consumers Union for misleading advertising. The union, in a statement, demanded the withdrawal of the advertisement that “misleads the consumer with the encouragement that he can file a lawsuit and collect compensation”.

The advertisement promotes the law that makes sharp practices by retailers illegal. The Consumers Union note that by repeating the ad daily, “in the form of brain-washing of Cypriot consumers, it is misleading and therefore constitutes unfair commercial practice, which violates the new law,” that is designed to protect consumers.

Who are they kidding asked the Union? “Do they not know that even if someone files a legal suit this will take 7-8 years to be tried and in no case would result in a supposed compensation?”

As they say, only in Kyproulla, could we have come up with an advert that violates the law it is promoting.

THE LATEST Covid decree issued by the health ministry is classic of the genre. The 1am start of the curfew does not apply to people attending wedding events. Wedding guests are allowed to be out and about until 3am, the start time of their curfew, as long as they can provide proof.

The ministry mentioned an ‘invitation’ as an example of the proof the police would accept but did not mention any other suggestions. Would the police accept a piece of wedding cake or those disgusting sugar-coated sweets in gauze as proof someone was at a wedding party?

This would allow people to have a piece of wedding cake, which does not go bad, in their car’s glove compartment to show the cops if they are stopped at 2am. They could also design and print off a wedding invitation whenever they want to stay out late.

The question is who will stay at a wedding party until 2.30am when they are not allowed to dance and obliged to sit in their chairs all night? Only the bride and groom and their parents are allowed to dance according to an earlier decree of the police state.

THE G7 group of wealthy nations on Saturday signed an agreement to establish a minimum global corporation tax of 15 per cent, that would force big multinationals to pay tax of at least 15 per cent in each country in which they operate.

On Thursday The Guardian website reported that our Kyproulla had threatened “to block EU officials from signing up to Joe Biden’s minimum 15 per cent corporate tax plan,” adding: “It shouldn’t be inconceivable that the Mediterranean island becomes a pariah state, blamed for ruining one of the only chances the EU has to act collectively in support of a global tax system.”

Lower down in this ‘viewpoint column’, the writer said: “Hungary charges 9 per cent and Ireland 12.5 per cent on corporate income and Ireland has lobbied hard against the Biden plan.”

Why is Ireland not in danger of becoming a pariah state given that it also opposes the 15 per cent corporate tax and could also block EU officials from signing Biden’s plan? Just asking.

Our View: Anastasiades’ CBMs proposal is just another ploy