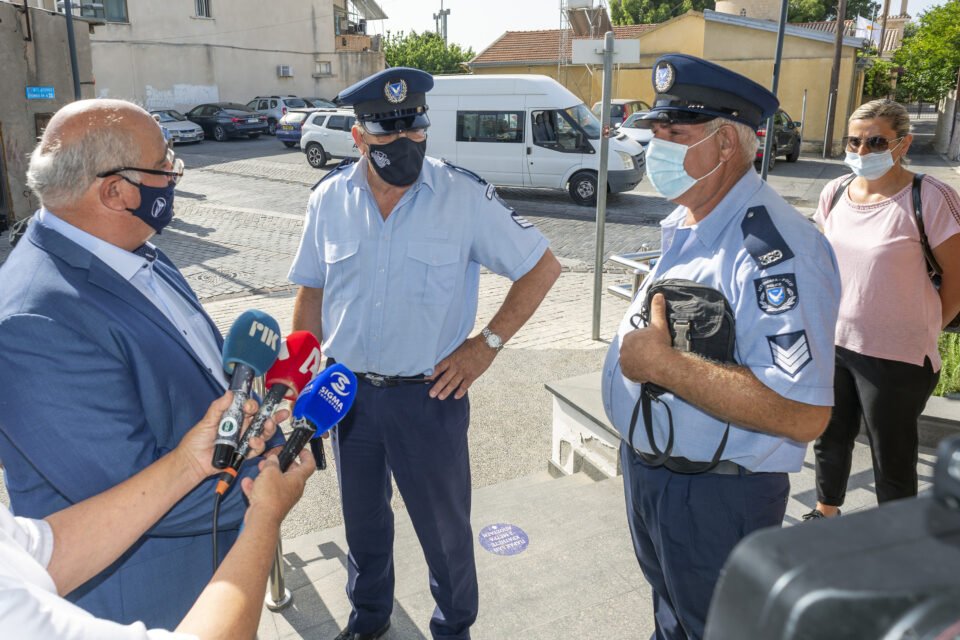 Police were called to the scene on Wednesday (Photo: CNA)

Kato Polemidia municipal councillors in Limassol on Wednesday broke into and took over an old co-op bank in protest against a government decision to give the building to the Famagusta municipality instead of them.

The district municipal council agreed on Tuesday to move into the bank building due to the serious problems their own faces. The cabinet had decided to let the Famagusta municipality use the bank building, a move with which the Kato Polemidia council disagrees.

“The building of the former Polemida co-op bank rightfully belongs to us,” mayor Nicos Anastasiou told the Cyprus News Agency.

Anastasiou, along with municipal councillors and staff took matters into their hands and had a locksmith break into the bank’s front entrance and moved in. They have already started cleaning the building and putting in their own furniture and equipment.

Their unilateral decision to move in was because the their existing town hall is falling apart, they said, with state authorities not doing anything about it despite being notified.

“We do not have anywhere else to go, we do not have a safe place for staff to work, so the decision was made by the municipal council to relocate to this building, which has been inactive for a long time,” the mayor said.

He dismissed any arguments about illegality arguing that it would be illegal only for one to take what does not belong to them.

“This building belongs to the local community and was built with their sweat and toil,” he said.

Anastasiou said he would resign if necessary and that the Kato Polemidia local authority had laid claim to the building since 2019 but that the government was letting the Famagusta municipality use it even though it has never asked anything of the sort.

“It is inconceivable what is happening,” he added.

Though police arrived on site, the municipality continued its relocation to the bank building.

The municipality even announced on Wednesday that its offices would remain closed for the next few days and would only receive people for emergencies due to the relocation to the new offices.

Famagusta municipality, however, quickly expressed their outrage. It called on those responsible for the unauthorised move to give the building to the occupied town’s council.

The municipality said it was “truly saddening” to watch “a demonstration of complete lack of respect for the people of Famagusta, whose only crime is that they are displaced in their own homeland.”

It added that the move by Kato Polemida local government is taking place at a time when Famagusta is “mercilessly under attack by Turkey” that, is opening the fenced area of Varosha in violation of international law and resolutions.