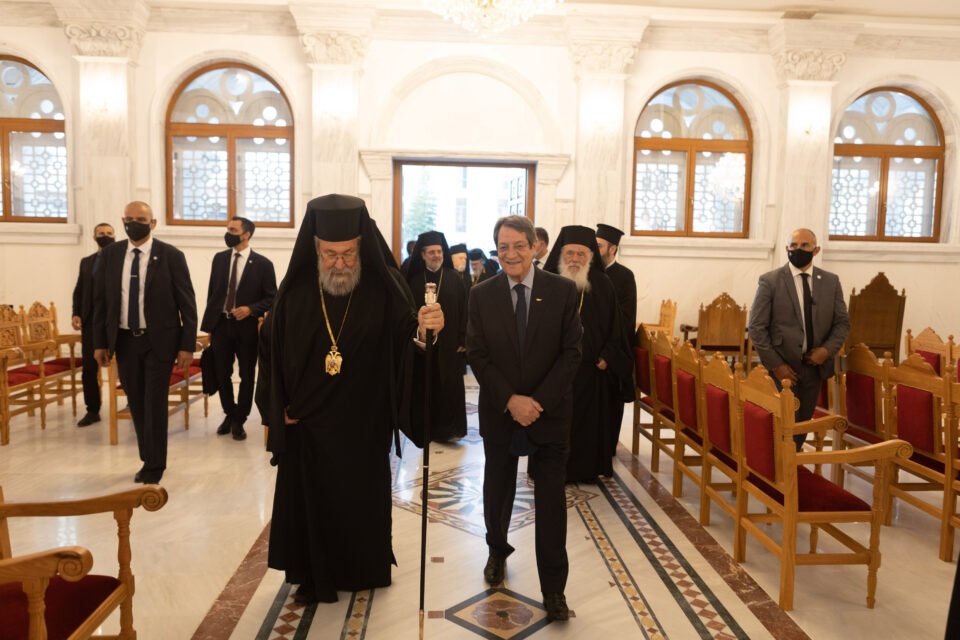 The Church of Cyprus marked the day of its founder, Saint Barnabas, on Friday with the official opening of the newly built cathedral dedicated to the apostle, located in the old part of Nicosia by the archbishopric.

A four-day programme of celebrations and events has been planned to mark the feast of Saint Barnabas, celebrated on June 11, the opening of the cathedral being the highlight.

Greece’s Archbishop Ieronynos II of Athens arrived for the cathedral opening, as did ministers, party representatives and the mayor of Nicosia; to list just a few.

President Nicos Anastasiades attended a lunch earlier held by Archbishop Chrysostomos on the occasion of the Thronal Feast of the Church of Cyprus at the Hilton Hotel in Nicosia.

The official opening of the cathedral of Saint Barnabas took place at 7pm and was broadcast live.

On Thursday evening, a small ceremony was held at the cathedral to honour the people who donated money for its construction. Anastasiades was also present.

Kodros Pilakoutas, on behalf of all the donors, stated that this was “a life project for the archbishop, who envisioned it and made it a reality”.

“It is a place of spiritual uplift that we all need at the moment,” Pilakoutas said, thanking the archbishop.

Archbishop Chrysostomos, who gave a tour of the cathedral to the guests, said he had been dreaming of the moment that the cathedral will be completed for many years.

He said the cathedral will allow the church to further serve and support the people and that “we will serve Him with all the power of our souls”.

The archbishop added that this vision was possible thanks to the donors. Though the church had funds for its construction, he said, these were running low, and it was not easy to complete the project without help. The archbishop also said that the pandemic had delayed the works but finally the cathedral’s inauguration was a reality.

He also referred to the many hurdles and criticisms the church had to face over the construction of the cathedral in this part of the old city.

According to the church, the cathedral combines the cruciform architecture type with the rotunda style – the only such building of its size to do so in Cyprus. The large dome will be decorated with a mosaic of Jesus Christ. The candleholders are copied from the ones in the old, medieval cathedral of Ayios Ioannis located within the archbishopric grounds.

The chandeliers were brought from the Czech Republic, the church bells from Poland while the marble decorations and the floors were imported from Greece. The mosaics as well as the stained-glass windows placed in the dome of the cathedral were made in Romania.

The carved altar was made from the three types of wood believed to be used on the cross of the Jesus: pine, cypress and cedar.