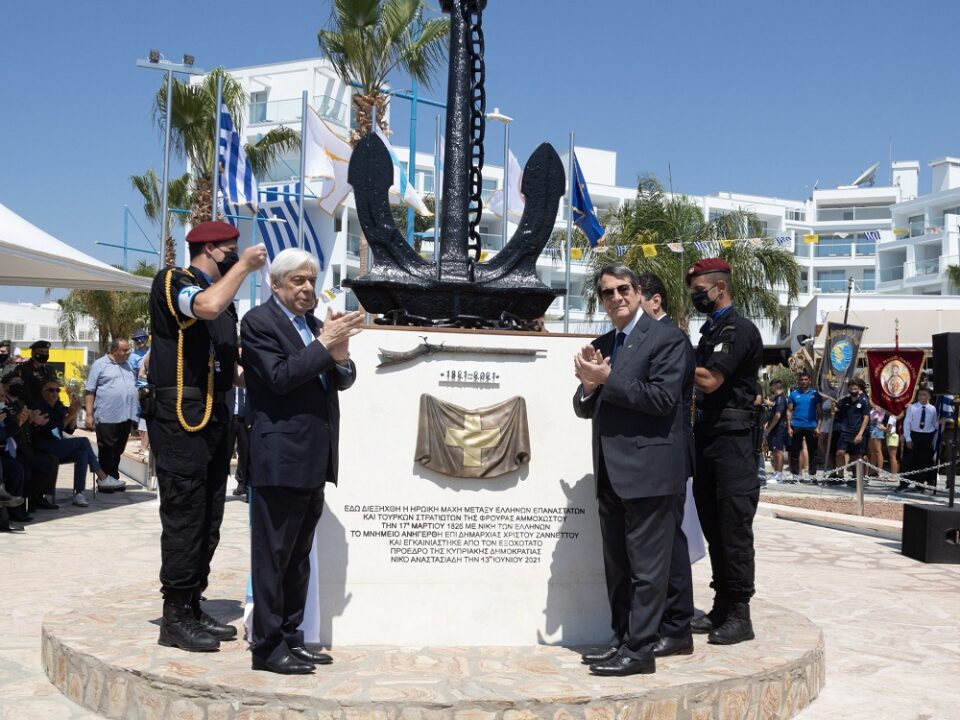 President Nicos Anastasiades on Sunday unveiled a monument commemorating the 1826 ‘Battle of Ayia Napa’, linked with the Greek Revolution for independence from Ottoman rule and the only one to have taken place on Cypriot soil.

Former Greek President Prokopis Pavlopoulos was also present at the ceremony that took place at the Ayia Napa harbour area.

The monument commemorates the Greek Revolution and a battle between around 200 Greek revolutionaries who had anchored off the southeast coast of Cyprus, where Ayia Napa is today, in search of provisions, and Ottoman soldiers guarding the area. The battle took place on March 17, 1826, and ended with the Greeks’ victory.

Anastasiades said the ceremony was an initiative “that honours the Epos of 1821 as a milestone of our common national consciousness.”

The Greek Revolution, as the noblest and greatest moment in the modern history of the Greeks, he added, was a strong foundation for the establishment of the first independent Greek state.

Celebrations in Greece but also Cyprus in March this year marked the 200th anniversary of the 1821 Greek Revolution, a nine-year war of independence against Ottoman rule.

“The Greeks, challenging with their uprising and their fortitude, every form of slavery, oppression and tyranny, became a symbol and source of inspiration for the enslaved peoples and international liberalism,” Anastasiades said.

It was this national consciousness, he said, that sparked interest and forced the Great Powers of the time to review their stance, and contrary to their policy until then, to cooperate and sign treaties and protocols for the positive outcome of the Greeks’ struggle.

The president also referred to the Cypriots’ contribution to the Greek Revolution.

Though Cyprus was not included among the areas where the liberation actions would take place, he said, in addition to the money and supplies it offered, more than 1,000 Cypriot volunteers participated in the struggle.

Anastasiades cites historical sources of the time testifying that around 130 Cypriots lost their lives in the Battle of Athens, while Cypriots were among the dead of the Exodus of Mesolongi.

“Equally important was the action of the ‘Phalanx of the Cypriots’ in the Greek Revolution, the group of Cypriot volunteers led by General Hadjipetros, who, under their own flag with the inscription ‘Flag of the Greek homeland of Cyprus’, fought with great bravery in various battles,” Anastasiades said.

He also referred to the “revengeful heavy blood tax” paid by the Cypriots for their participation in the Greek Revolution and the killing by the Ottomans of Cyprus’ Archbishop Kyprianos who was executed in July 1821 along with three bishops. It is believed that around 400 people were executed in Cyprus at the time.

Anastasiades also said that the only battle on Cypriot soil against the Turkish guards of Ayia Napa and Famagusta, but also its victorious outcome, “inspired the Greeks of Cyprus in times of trial, encouraging them in their ensuing struggles for our homeland.”

He likened the heroes of the Greek Revolution with those of the 1955-’59 Eoka struggle for independence from British rule. He said Greek Cypriots draw lessons and strength from these struggles to carry on with their “peaceful struggle” against the ongoing illegal Turkish occupation and for the prevalence of justice.

“What we seek, what we desire, what we aim for is nothing but Cyprus’ liberation from any occupying troops, from any guarantees, any dependencies on third parties. What we seek is respect for the human rights of every Cypriot citizen,” Anastasiades said, referring to Turkey’s refusal for the abolition of the system of guarantees.

“We do not ignore and do not deny that the conditions and time have made the Turkish Cypriots compatriots as well,” he added. He said he did not distinguish between citizens’ ethnic origins. “What we want are European citizens who deserve as much as the rest of Europeans deserve,” he said.

He added that the Cypriot people have lived peacefully for hundreds of years and they can continue to coexist “as long as they leave us alone, independent, sovereign.” Anastasiades pledged to work towards a solution to the Cyprus problem for the establishment of a state that respects the principles and values of the EU,  respects the human rights of all its citizens, and the principles of democracy.