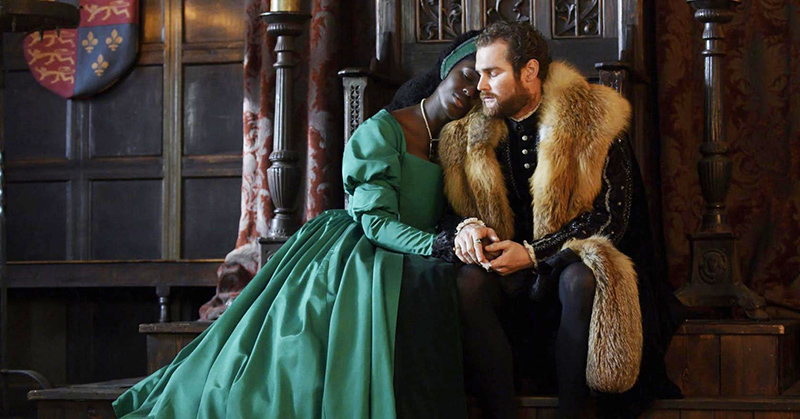 The Channel 5 historical drama series Anne Boleyn, directed by Lynsey Miller, stars black British actor Jodie Turner-Smith as the Tudor queen consort at the height of her power and influence, shortly before her dramatic fall and execution in May 1536.

Even before the first episode was shown, some complained that Turner-Smith’s casting was historically inaccurate because Anne was white. But these complaints ignore several existing versions of the doomed queen’s story that have portrayed her deliberately and creatively beyond the agreed-upon facts.

The series itself acknowledges its place in this tradition. One of its taglines declares that it is ‘Inspired by truth … and lies’. Turner-Smith’s wonderfully intense, enigmatic performance is the latest addition to a long line of TV and movie depictions of Anne.

Two of the most memorable are Charles Jarrott’s romantic drama Anne of the Thousand Days (1969) starring French-Canadian actor Genevieve Bujold, and the HBO series The Tudors (2007-2010) in which British star Natalie Dormer plays a fiery Anne in modernised, glamorous costumes. At the same time, this Anne is written faithfully to her historical reputation as a religious reformer (Dormer reportedly insisted that her Anne is shown encouraging the use of the English Bible at the royal court).

Anne Boleyn’s marriage to Henry VIII was unpopular with those loyal to his first wife, Katherine of Aragon. These individuals included Eustace Chapuys and other, often anonymous, ambassadors from royal courts across Europe. The unknown author of the Spanish Chronicle relays scandalous rumours used to show Anne as guilty of the adultery for which she was, in part, beheaded.

During her lifetime and after her execution, then, the facts and fictions of Anne’s life were mingled. Alongside the rumours, there was also the legend of a highly intelligent and determined woman who gained a crown only to lose her head just three years later.

That mixture of facts, rumours and legend can also be found in popular historical novels about the period. Forthcoming research on historical fiction argues that some of these novels use historical inaccuracies on purpose to point readers back to the patchy and often libellous historical record, and also to encourage them to wonder, ‘Who was the real woman?’

You may be aware of the first two volumes of Hilary Mantel’s prize-winning Thomas Cromwell trilogy, Wolf Hall (2009) and Bring up the Bodies (2012), in which Anne Boleyn is a main character. This Anne is as ambitious and ruthless as any of her most dramatic screen portrayals, but also strikingly fragile and vulnerable against a detailed historical background.

Before Mantel’s famous bestsellers, there were other fictions of Anne’s life that stressed her historical importance by mixing facts with inventions – even with fantasy. The Anne in Deryn Lake’s Sutton Place (1983), in a moment of fear, helps a sorcerer cast a spell as she realises she may not give Henry the son he needs.

Robin Maxwell’s The Secret Diary of Anne Boleyn (1997) adopts its diary form to imagine Anne’s most private thoughts. We follow her from her first days at the royal court to the night before her execution. Most of the real Anne’s writings are lost to history, but this novel works with our desire for the ‘true’ story by imagining it at an emotional and psychological level.

Suzannah Dunn’s The Queen of Subtleties (2004) has a similar motivation to Maxwell’s, it seems, when it imagines Anne Boleyn’s point of view in the form of modern language and slang. In the book’s opening section, Anne, addressing her daughter, the future Elizabeth I, boasts that in marrying Henry VIII she “got old England by the throat”, leaving it “changed for ever”. This is true.

Like the other novels mentioned here, Dunn’s is formidably well-researched, but its deliberate inaccuracies of expression make Anne what she inevitably is to modern audiences: a woman destroyed and then remembered as ahead of her time – so much so that she joins our own time.

Partly because Anne Boleyn’s life ended in the way it did, with her as a notorious, executed traitor, the facts of her case are not fully agreed upon. Some artistic licence is both inevitable and important in understanding her story’s timeless power. The Anne of the historical record and the Anne of fiction are both imaginative creations and opportunities to reflect on her historical significance.