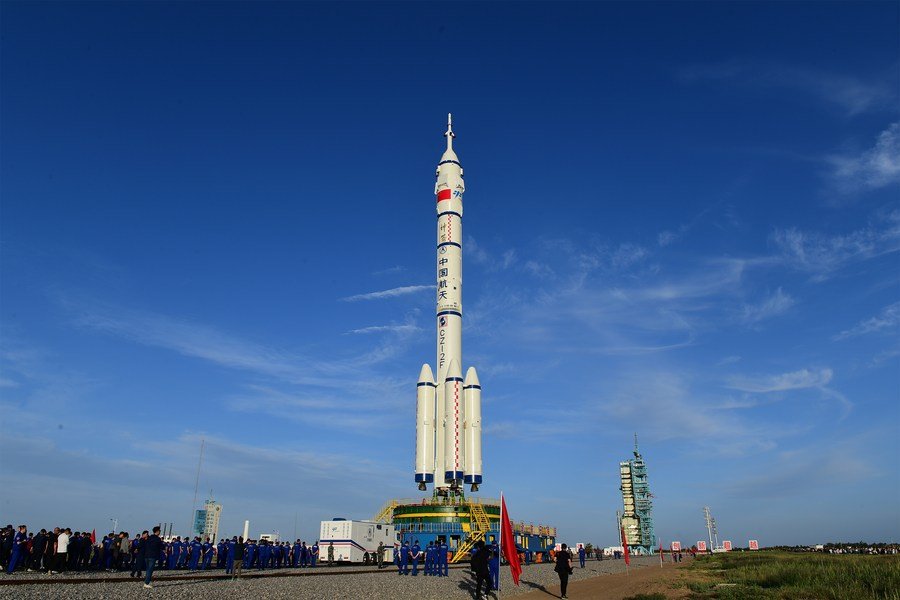 The Shenzhou-12 manned spaceship and a Long March-2F carrier rocket after it was transferred to the launching area of Jiuquan Satellite Launch Center in northwest China, June 9, 2021. (Xinhua/Wang Jiangbo)

The Shenzhou-12 manned spaceship is expected to be launched at 9:22 a.m. Thursday (Beijing Time) from the Jiuquan Satellite Launch Center in northwest China, announced the China Manned Space Agency (CMSA) on Wednesday.

The spaceship will take three male astronauts — Nie Haisheng, Liu Boming and Tang Hongbo — into space for a period of three months for the construction of China’s space station, said Ji Qiming, assistant to the director of the CMSA, at a press conference held at the launch center.

After entering orbit, the spaceship will conduct a fast automated rendezvous and docking with the in-orbit space station core module Tianhe, forming a complex with the core module and the cargo craft Tianzhou-2. The astronauts aboard Shenzhou-12 will be stationed in the core module and remain in orbit for three months.

The launch will be carried out with a Long March-2F carrier rocket, which will be filled with propellant on Wednesday morning, Ji said.

China launched the space station core module Tianhe on April 29 and the cargo spacecraft Tianzhou-2 on May 29. According to Ji, the complex of the two spacecraft has been in good condition, with all equipment operating normally.

The complex has moved into an orbit at an altitude of 390 kilometers, ready for the rendezvous and docking as well as the entry of the astronauts, Ji said.

All systems conducting the Shenzhou-12 mission have undergone the comprehensive rehearsal, the crew is in good shape, and all pre-launch preparations are in order, Ji added.

The  mission aims to conduct in-orbit verification of major technologies in China’s space station construction and operation, according to CMSA on Wednesday.

The technologies to be tested include those concerning the astronauts’ long-term stay and health care, recycling and life support system, supply of space materials, extravehicular activities and operations, as well as in-orbit maintenance.