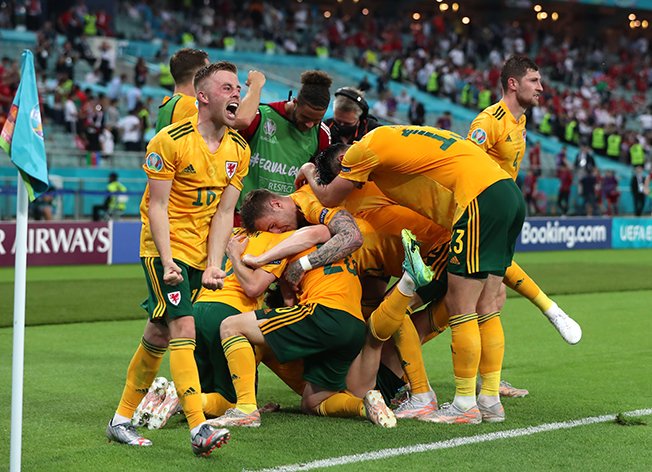 Wales captain Gareth Bale set up Aaron Ramsey and Connor Roberts to score for a 2-0 victory over Turkey in their Group A match at Baku’s Olympic Stadium on Wednesday to take a big step towards qualifying for the European Championship knockout stages.

Ramsey failed to convert two chances early in the first half but scored just before halftime when he made a run through the middle to chest down Bale’s perfect ball over the defence and slip it past the goalkeeper.

Wales could have doubled the lead at the hour mark when Bale was tripped by Zeki Celik and awarded a penalty, but the Welsh skipper skied his effort after a stuttering run up.

Wales scored right at the death in injury time when a corner was played short and Connor Roberts was on hand to divert a Bale pass past goalkeeper Ugurcan Cakir to seal the victory.

“I’m delighted with the win. We fought hard, we worked our socks off like we always do,” Bale said after the game, adding that his contributions compensated for the penalty miss.

The surprise semi-finalists of Euro 2016 now have four points, after drawing with Switzerland in their opener. Their final game is against Italy next week. Turkey take on the Swiss.

Ramsey was twice picked out by Bale with superb defence-splitting passes but both times he failed to score, with Cakır denying him from a tight angle in the sixth minute and then thundering a shot over the bar in the 24th.

There was nothing lucky about the third time with Bale floating a superbly-timed cross in the 42nd minute for Ramsey who brought the ball down perfectly and slotted under Cakir.

With Turkish and Azeri Presidents Tayyip Erdogan and Ilham Aliyev in the stands, Turkey upped the pace after the break.

Captain Burat Yilmaz, who had missed a good chance in the first half, should have scored 10 minutes after the restart when he was left completely unmarked in front of the Welsh goal but blazed a volley from three metres out well over the crossbar.

Wales found space to counter attack and Ramsey’s low shot was blocked before Bale was brought down just inside the box to earn a spot kick on the hour.

But the 31-year-old’s effort flew high and wide to keep the Turks in the game, who then forced a good save from keeper Danny Ward when he punched a Merih Demiral header wide in the 87th.

With the Turks having run out of steam in stoppage time, Bale cut inside to feed Roberts for their second goal.

“We’re in a fantastic position now. If you’d offered us 4 points at the start, we’d have bitten your hand off,” Bale said, paying tribute to Welsh fans who were heavily outnumbered by Turks in the stadium