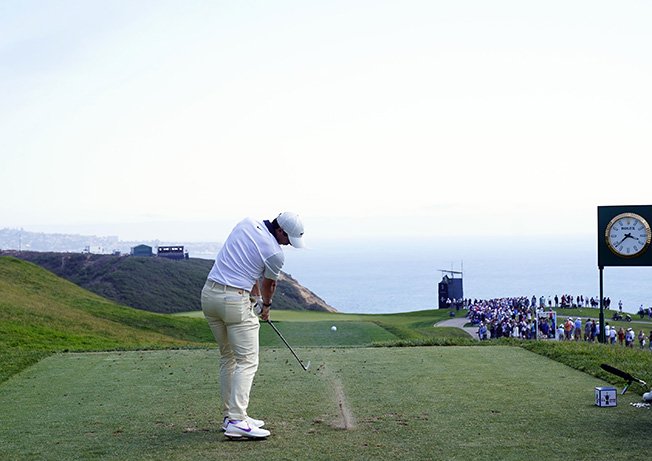 Perennial major contender Louis Oosthuizen found himself back in familiar territory, tied for the lead with two holes left when first-round play was halted for the day by darkness at the U.S. Open at Torrey Pines on Thursday.

A month after finishing equal second with Brooks Koepka behind Phil Mickelson at the PGA Championship, Oosthuizen picked up here next to the Pacific where he left off in the Atlantic at Kiawah Island, South Carolina.

Swinging as smoothly as ever, the South African gathered five birdies against just one bogey before calling it a night after 16 holes.

American Russell Henley earlier carded a four-under-par 67 to take the clubhouse lead. He can enjoy a leisurely breakfast on Friday while Oosthuizen returns at the crack of dawn.

“I think somehow I focus a little bit better when I play those courses, knowing that the margin for error is really small.

Oosthuizen won the 2010 British Open at St. Andrews and has the dubious distinction of having been a runner-up in all four majors, including the 2015 U.S. Open.

Oosthuizen was among three dozen players unable to complete the round due to a morning fog delay of 90 minutes.

Rory McIlroy started well and held on for a 70, while defending champion Bryson DeChambeau had three successive bogeys at one stage en route to a 73.

DeChambeau went directly to the range to hit some balls in the gloom. He cut a lonely figure, pounding balls in the darkness long after everyone else had left the property.

Phil Mickelson fared even worse than DeChambeau, his hopes of completing the career grand slam by winning the only major that has eluded him hanging by a thread after a 75.

American world number 63 Henley entered the week riding a string of poor results but sounded as though it was only natural that he should be on his lofty perch looking down at some of the “Who’s Who” of the sport.

“I don’t feel like it’s a huge surprise because I’ve played some good golf in some bigger events in the last year,” said the three-time PGA Tour winner.

Four-time major winner Koepka, runner-up at last month’s PGA Championship, started on the back nine and held the sole lead at one point until a bogey at the picturesque par-three third, where his tee shot into a stiff headwind drifted into a barren penalty area.

“Pretty pleased. Not the best, but I’ll definitely take it,” he said.

“I’ve just got a good game plan, focused, I know what I’m doing, and I don’t try to do anything I can’t. It’s just all about discipline in a U.S. Open.”

Six-time U.S. Open runner-up Mickelson, playing a day after his 51st birthday and a month after becoming golf’s oldest major winner, set the tone for a poor day with a bogey at his first hole.

The left-hander, distracted by a spectator’s phone, took a penalty stroke at the par-five 13th after his approach shot settled in a bush near the green. His next shot hit the flag stick and ricocheted back into the rough from where he got up and down for bogey.

“I had some chances to get the round a little bit better. Fought hard, made a lot of short putts to kind of keep myself in it and then I ended up bogeying six and seven,” said Mickelson.

“Two-over would have been a pretty good round and I ended up at four, so I’m a little disappointed about that.”