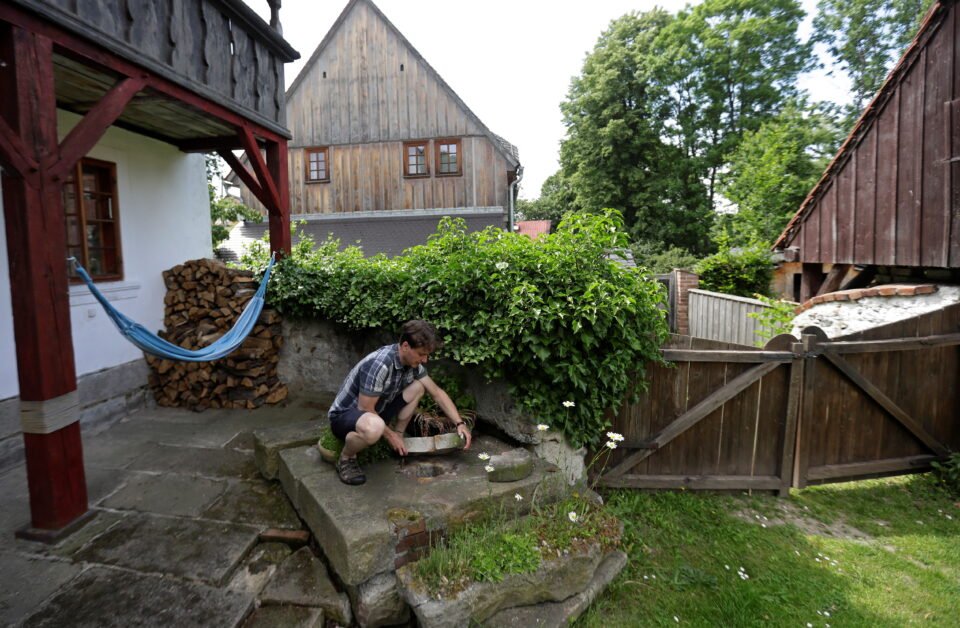 Milan Starec opens up his dried-up garden well in the village of Uhelna near the town of Hradek nad Nisou, Czech Republic

A 250-year-old house in a leafy Czech village was a chance for Milan Starec to get his family out of the city. It has also put him in the middle of a cross-border dispute about the environmental costs of coal mining.

A few years ago, the Turow open-pit mine, a few kilometres away in Poland, was hardly visible from Starec’s house in Uhelna, north of Prague.

Now more of Turow can be seen, and worries are growing in Uhelna and nearby villages that water is being drained away by the mine as its operations are moved towards the border, and the noise of the workings is likely to get louder.

In February, the Czech Republic filed a lawsuit against Poland at the EU Court of Justice, saying it had violated EU law in approving the extension of the mine and excluding the public from the process.

For Starec, a 39-year-old sales director, the biggest problem now is the noise, which sometimes reaches the Word Health Organization’s safe night-time limit of 40 decibels.

He fears the shift of mining operations up to the border will mean more noise and drain more water from his village.

The Czech Geological Survey (CGS) reported in May that groundwater levels around Uhelna had dropped nearly 8 metres since 2014 and could fall 6.8 metres in the next six years if last year’s rate of decline continues.

“The water is a threat. It is something very frightening,” Starec said. “If the water is lost from the only source in the village, I don’t know what the solution is.”

Bilateral talks on a deal to drop the lawsuit started on Thursday. The Polish government says the mine is vital for jobs and energy and rejected a court order in May to halt mining until a final ruling in the case.

Starec said the impact on his village became clear when Polish state-run company PGE unveiled plans for Turow in 2019.

“We thought we are in the EU and it is not possible that one country would have such destructive intentions toward (another’s) border without any precautions,” he said.

He is not alone. In nearby Vaclavice village, Michael Martin keeps water containers for emergencies. On Tuesday, he measured a 30 centimetre drop in his well over two weeks.

‘DEVIL IN THE DETAIL’

Ondrej Nol of the CGS said the decrease in water seen at deeper levels was mainly affected by Turow, while at shallower levels, where Uhelna gets its water, a combination of mining, drought and usage were factors.

Turow, a 30 square kilometre area, is one of Poland’s largest lignite mines. The adjoining power plant provides 7% of electricity used by households.

The complex, employing 5,000, is slated to run until 2044, conflicting with EU ambitions to cut emissions to net zero by mid-century.

PGE denies it left anyone out of the planning process. It has invested 90 million zlotys ($24 million) in the last five years, a spokesperson said, on measures such as noise reduction on conveyor belts, cleaning up drainage and building anti-dust screens.

Wojciech Dobrolowicz, mayor of the Polish town of Bogatynia, whose budget is heavily reliant on the mine, said independent experts should assess water loss claims, which have not been made on the Polish side.

He recognises coal is disappearing in Europe’s decarbonisation push. But Turow should be dealt with “through evolution, not revolution”, he said.

Czech Deputy Environment Minister Vladislav Smrz said the government was not intent on stopping the mine, only safeguarding the environment.

The Czechs want Poland to help cover costs, such as up to 50 million euros ($60 million) to replace water pipes. An underground barrier to prevent further outflow of water is also being discussed.

A deal between the countries could take weeks. “Of course the devil is always in the detail,” Smrz said.

Beyond triumph: the story of the modern Olympic Games