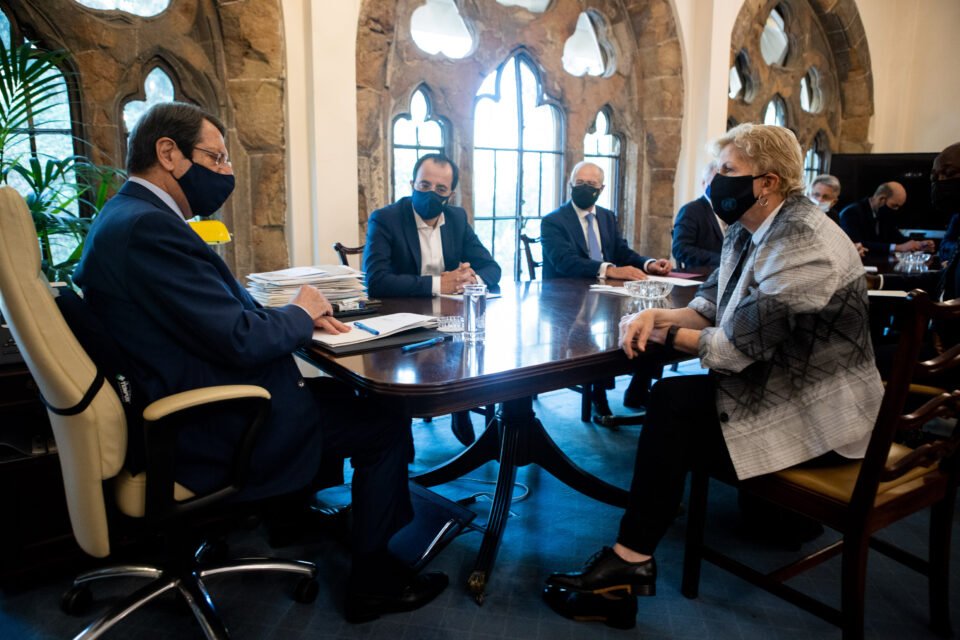 The two sides on Tuesday reiterated to UN special envoy Jane Holl Lute their opposing positions on the way forward for the Cyprus problem as the UN official visited the island in a bid to find common ground for the continuation of the procedure.

President Nicos Anastasiades reiterated his proposals for substantive confidence-building measures (CBMs) he submitted during the informal meeting in Geneva in April while Turkish Cypriot leader Ersin Tatar insisted on the recognition of the north as a sovereign state.

According to government spokesman Kyriacos Koushos, Anastasiades, during his meeting in the morning with Lute at the Presidential Palace, reaffirmed his readiness to participate in a new informal summit on the Cyprus problem and substantive talks. He said the aim is a just, functional, and viable solution of the problem, based on the UN Security Council resolutions and the UNSG’s relevant mandate.

Lute was on the island for contacts with the two leaders as part of efforts for another informal summit on the Cyprus problem after the April one April yielded no results. She has already had contacts with guarantors Greece, Turkey and the UK.

Anastasiades, Koushos said, “expressed his readiness, if the secretary-general deems it useful, for a joint meeting with the Turkish Cypriot leader”.

On the other hand Tatar, who met Lute early afternoon, said he told the UN official the Turkish Cypriot side sticks to the position it submitted in Geneva. It calls for recognition by the UN Security Council of the north as a sovereign state which will then negotiate with the Republic of Cyprus their future relationship.

Tatar stated that he was ready to participate in any informal meeting but to go to substantive talks it was important that the six-point proposal he had submitted was accepted, especially the first point that concerns sovereign equality and equal international status. According to reports in the north, he also said that Lute wished for direct negotiations without a second informal meeting, but that there is no such common ground now.

He also posed the question on how long a solution brought about through coercion would last.

“We believe that if there is a solution, it can be successful if it is based on equality between two states. And our sovereignty is extremely important,” Tatar added.

Both Tatar and Turkey insist that a federal solution is no longer possible while the Greek Cypriot side argues this is the only acceptable form of solution.

Tatar also said that if UN Secretary general Antonio Guterres was meeting Anastasiades, he should also meet with him as well, arguing that the UN should observe the principle of equality. He said he submitted a meeting request through Lute.

Anastasiades is scheduled to meet Guterres in Brussels on Friday on the margins of the European Council (EUCO).

Koushos said Anastasiades will discuss with Guterres “the whole spectrum of the Cyprus issue and will put forth again the positions of the Greek Cypriot side.”

Lute’s contacts in Cyprus are not expected to yield any results with Nicosia arguing that a second informal summit is unlikely unless Turkey shifts its stance on the Cyprus problem.

The EU leaders are expected to discuss Turkey’s relations with the bloc during their forthcoming Brussels summit on Thursday and Friday.

Lute launched a new round of contacts with the two leaders and the three guarantors in search of common ground that would allow another informal summit where all parties will discuss the way forward on the Cyprus problem. The last summit, in Geneva last April, ended with an agreement by all parties to try again after no progress was achieved after the Turkish side submitted its proposal on a two-state solution to the Cyprus problem.

The CBMs Anastasiades proposed during the informal summit in Geneva concern Varosha and the Tymbou airport being brought under UN administration so that it could open to international destinations.

How trees secretly talk to each other in the forest

This March, High Commissioners open up their diaries to school students