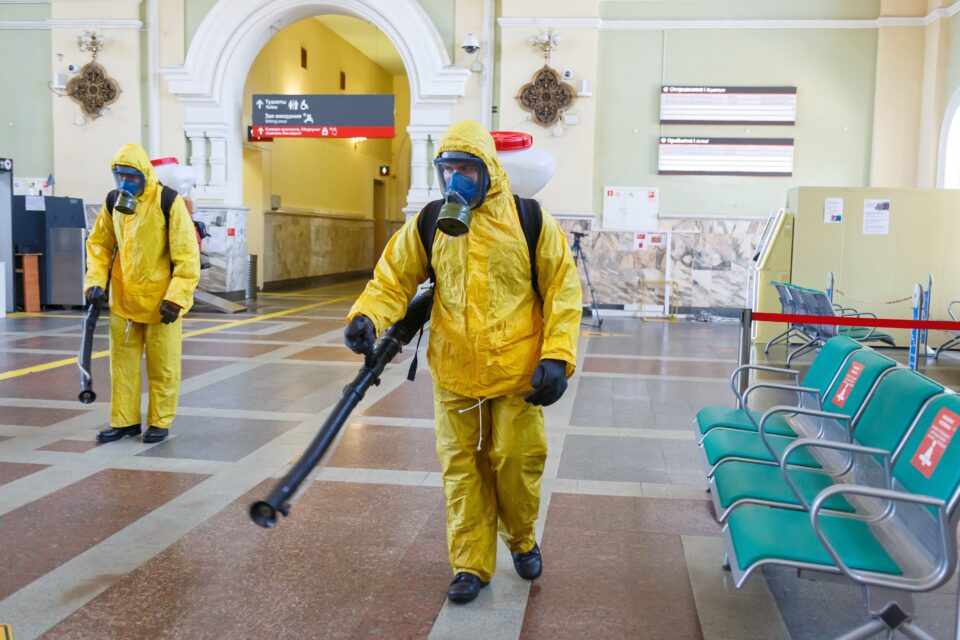 Specialists spray disinfectant while sanitizing the Rizhsky Railway Station, one of the measures to curb the spread of the coronavirus disease (COVID-19), in Moscow (Division of Russian Emergencies Ministry/Handout via REUTERS)

The Kremlin said on Tuesday that people who were not vaccinated against COVID-19 or did not have immunity would be unable to work in all workplaces in Russia and that those people could be discriminated against.

“The reality is such that discrimination will inevitably set in. People without vaccination or immunity will not be able to work everywhere. It is not possible. It will pose a threat to those around them,” Kremlin spokesman Dmitry Peskov told reporters.

President Vladimir Putin warned on Monday that the coronavirus situation in some Russian regions was getting worse as authorities began promoting the idea of regular revaccinations to try to halt a surge in new cases.

Putin this month spoke of how Russia, which has approved four domestically-made vaccines and sold its flagship Sputnik V vaccine to many foreign countries, had handled the pandemic better than many other nations.

But new cases have since surged, particularly in Moscow, which on Saturday registered a record 9,120 daily cases. The Kremlin on Friday blamed the increase on people’s reluctance to have vaccinations and “nihilism”.

“Unfortunately, the coronavirus threat has not receded,” Putin told the lower house of parliament on Monday. “In many regions the situation has even got worse.”

Grim video footage emerged on social media on Sunday, purportedly showing people sick with COVID-19 laying prone on the floor of a hospital corridor in St Petersburg, Putin‘s home city which is hosting some matches in the Euro 2020 soccer championship.

Local authorities are investigating the video to check its veracity.

By June 2 only 18 million of the around 144-million-strong population had received at least one dose of a vaccine.

The Kremlin has denied people’s distrust in the authorities is one of the reasons behind the low vaccination rate.

Critics on social media have said state media’s take down of some foreign vaccines has added to people’s fears about getting vaccinated however, and have complained that some senior officials set a poor example, taking a long time to get vaccinated themselves and then only doing so behind a veil of secrecy.

Russia reported 546 coronavirus-related deaths on Tuesday, the most confirmed in a single day since February, and 16,715 new COVID-19 cases in the last 24 hours, the continuation of a dramatic rise authorities have blamed on the new Delta variant.

Philippines’ leader threatens those who refuse Covid-19 vaccine with jail