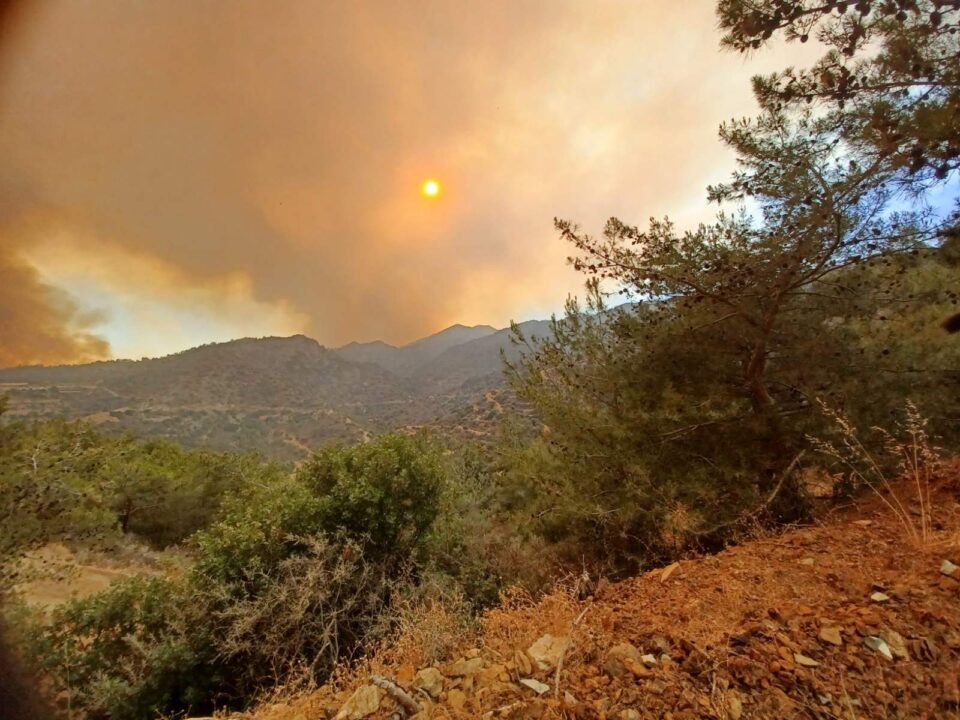 A huge fire raged out of control on Saturday evening after destroying homes and large areas of pine forest, forcing authorities to evacuate communities in Limassol, where it started, and Larnaca.

Late on Saturday, police said they arrested a 67-year-old man in connection with the fire. It is understood that the man was being questioned over reports that he had been seen burning stubble at the time when the fire started.

Fire fighting forces used all available means to contain the fire, which started in Arakapas at around 2pm, but efforts proved futile as the flames raced through the rubbed terrain, engulfing everything in its path.

The Electricity Authority said that the fire had caused power outages in the region, deactivating water pumps and making fire fighting more difficult.

Electricity Authority Spokeswoman Christina Papadopoulou said there is extensive damage to the network,  as the fire has burnt a large number of electricity poles and it is impossible for EAC technicians to go near the areas and estimate the damage.

Homes and other property and large large areas of pine forest and other vegetation were destroyed in just a few hours, as authorities raced to save lives in communities in the path of the fire.

Fanned by strong winds, the fire burned homes in Arakapas, which had been evacuated earlier, and raced through the village, swiftly jumping district boundaries into Larnaca.

The smoke could be seen as far as Ayia Napa.

The head of the forestry department said it was impossible for firefighters to tackle the massive fire that without outside help.

Charalambos Alexandrou said it was impossible to extinguish the fire.

“Without outside help today our work will be impossible tomorrow too,” he said. Alexandrou said the fire looked from the start that it could not be tackled.

“It is a very difficult day for Cyprus,” President Nicos Anastasiades said in a tweet. “The priority is not to lose human lives”.

Ten aircraft were assisting ground forces to battle the fire but they were forced to stop during the night, as they could not fly missions in the darkness.

The government has asked Israel and the EU for help. Fire services spokesman Andreas Kettis said they were expecting two aircraft from the neighbouring country in the next hours. Greece has also sent two aircraft.

The European Commission meanwhile has mobilised the rescEU system which tackles natural disasters to Cyprus.

We remain, she added, “in close contact with authorities.”

The absence of aircraft in Cyprus left ground forces fighting the fire in the darkness in rugged terrain.

“There is no other choice. We have recalled all personnel. There is no firefighter at home.”

President Nicos Anastasiades said it was a very difficult day for Cyprus.

“The entire state mechanism is on high alert.The priority is not to lose any lives.”

Agriculture Minister Costas Kadis said it was an exceptionally difficult situation. “The conditions we are experiencing are unprecedented,” he said, adding the loss of property and forest was huge.

Footage recorded by bystanders showed at least two houses on fire in Arakapas and firefighters trying to put the flames out before the spread.

Arakapas community leader Vasos Vasiliou said the scenes were chaotic. Some residents refused to leave the village, risking their lives to save their homes, he said.

“They told us (to leave) but I have no other place,” one resident said. “It is my home, where should I go?”

Vasiliou said several homes have been destroyed by the fire, which swept through the village in high speed.

Arakapas has around 300 residents but a lot of people have holiday homes there so the number rises in the summer.

Arakapas was just one of at least three fires firefighters were battling at midday on Saturday.

Cognitive defusion: breaking the hold of controlling thoughts and over-thinking