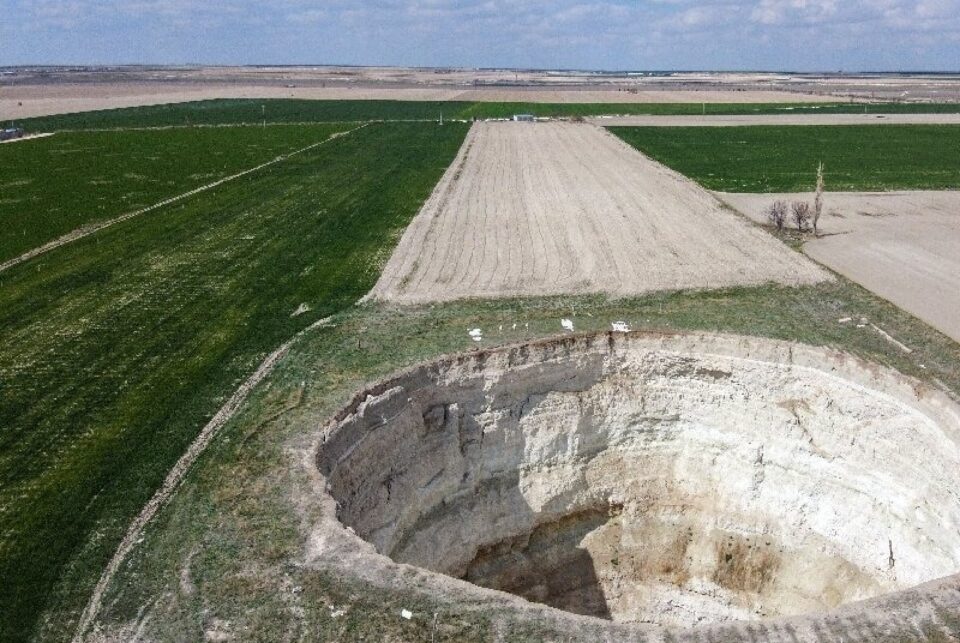 A sinkhole caused by drought in Konya, Turkey.

The cost of food has reached a crisis level in Turkey, as production declines and the weak Turkish lira (currently at 10.30 to the euro) makes  imports more expensive.

The central bank’s failure to support the lira continues to fuel price inflation.  On June 14, the central bank is expected to announce that interest rates remain at 19 per cent – a rate cut is also possible. Either policy choice will hurt the value of the lira against major currencies.

“In an ideal world, with an orthodox central bank that wants to bring down inflation, it would almost certainly be raising interest rates. But this is Turkey’s central bank, which is subject to political influence that has a heavy sway over policymaking,” said Jason Tuvey, an emerging markets economist at Capital Economics, in a note.

More than 20 of Turkey’s 81 provinces have been seriously affected by decreasing precipitation since last year, according to data from the Turkish Statistical Institute (TurkStat). Farmers complain that, despite the decline in production, no plan has emerged from Ankara to help improve conditions for agriculture.

The overall production of grain crops is thus expected to decline by five per cent. Meanwhile agricultural input costs (diesel fuel, electricity) have risen by 150 per cent.

And this has driven a great number of households below the poverty line. More than 21 per cent now do not have enough income to pay for essentials.

Turkey’s Gini coefficient, a statistical measure used to gauge economic inequality, worsened by 0.015 points to 0.41 in 2020 — a level comparable to those of Brazil, Mexico and South Africa.

“July prices look to be even higher, given energy price hikes announced in the first week of the month. All this makes the central bank’s forecast of 12.2 per cent inflation at year-end appear very optimistic,” Timothy Ash, a strategist at BlueBay Asset Management, wrote in a note to clients.

All of this has made analysts very bearish on the lira, with Commerzbank predicting continuing decline to the end of the year. “It’s just a way of labeling the probability of “spiraling lira weakness,” said Ulrich Leuchtmann, head of currency strategy in Frankfurt. “We find it impossible to identify a precise break point.”

Coronavirus: Some businesses prefer to close than be SafePass police

Ryanair to hire 2,000 pilots for new fleet of Boeings