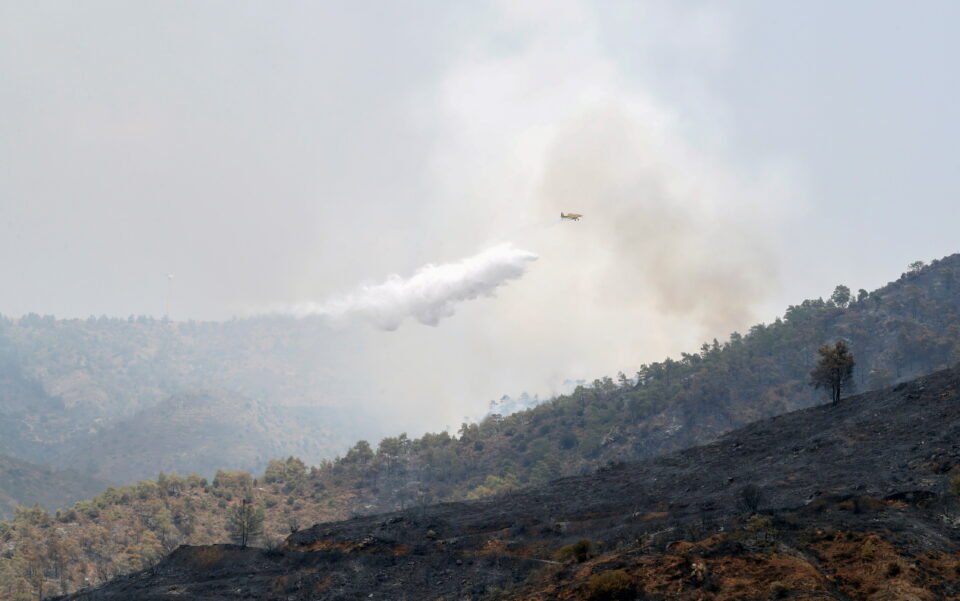 In the wake of a deadly fire that burned nearly 55 square kilometres of land in the foothills of the Troodos mountains and killed four people, the government has approved the rental of two firefighting aircraft to boost firefighting resources.

The decision was taken on Tuesday during a meeting between Agriculture Minister Costas Kadis and President Nicos Anastasiades at the Presidential Palace, philenews reported.

Officials from the agriculture ministry are currently inspecting the area where the fire took place, gathering evidence and collecting statements from locals. They are expected to brief the government on their findings in two weeks.

After the meeting, Kadis said the government is also considering buying a firefighting air tractor, an advanced agricultural aircraft that carries a chemical hopper between the engine firewall and the cockpit, in order to be better prepared in case of other serious fire incidents on the island.

In the meantime, a new application for the establishment of a firefighting aircraft base in Cyprus will be submitted within the framework of the EU rescEU programme.

The programme, sponsored and funded by EU funds, aims to enhance both the protection of citizens from disasters and the management of emerging risks.

In addition, rescEU establishes a new European reserve of resources, which includes a fleet of firefighting planes and helicopters, medical evacuation planes, as well as a stockpile of medical equipment and field hospitals that can respond to health emergencies, and chemical, biological, radiological, and nuclear incidents.

The government is also studying solutions to deal with the frequent fires that have occurred in the country in the past years, namely the hiring of new firefighters, a ban on burning cuttings, a possible establishment of a coordinating body for fires and the obligation for small communities, especially those more exposed to risks, to create fire-safe areas.

According to Kadis, Anastasiades also instructed the firefighting forces to create a task force with universities and research centres to study the issue of fires and come up with more solutions.

An idea that came up during the meeting, which was put forward by the acting director of the Fire Service, Polyvios Hadjivassiliou, was to increase the staff at the Moniatis and Evrychou fire stations, the first one located in the Limassol district and the second one in the Nicosia district, by hiring more firefighters.

In addition to that, according to Kadis, Justice Minister Stefi Drakou will table a proposal for stiffer penalties for people responsible for starting fires, whether deliberate or by accident, are currently being studied.

Suckers for learning: why octopuses are so intelligent