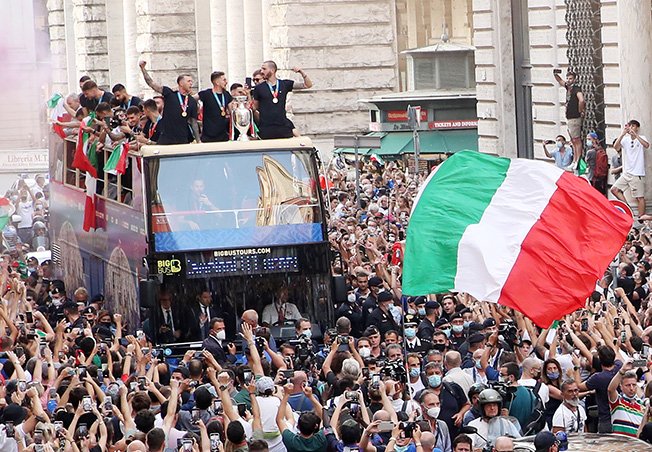 Italian team players overrode police objections in taking an open bus tour through the streets of Rome after their Euro 2020 victory, even though this had been forbidden for fear of spreading COVID-19 infections, the capital’s prefect said.

Thousands of euphoric fans thronged the centre of Rome on Monday afternoon to hail coach Roberto Mancini and his team after their triumph over England on penalties in the final at Wembley Stadium in London.

“At that point we had no choice but to acknowledge the situation and handle it in the best possible way,” said Piantedosi, who is the top public security authority in Rome.

He said the bus and fans were already waiting for the players to appear and that refusing to use an open-top vehicle could have risked public disturbances.

Piantedosi said the Italian football federation (FIGC) had agreed to hold a controlled ceremony in one of central Rome’s major squares, the Piazza del Popolo, but then changed its mind and reiterated a request to use the open bus.

In a statement, FIGC said it had always acted responsibly but after consultations with Rome authorities it decided not to disappoint fans who had come to celebrate the team.

However, scenes of the “Azzurri” team bus ploughing slowly through overflowing crowds fuelled fears of fresh COVID-19 outbreaks in the capital, after the government removed most restrictions it had enforced to keep contagion under control.

“The footage shows that police officials were virtually the only people wearing a mask. We are deeply saddened (about that),” Piantedosi told Corriere della Sera.

Fish hooked on meth – the consequences of freshwater pollution