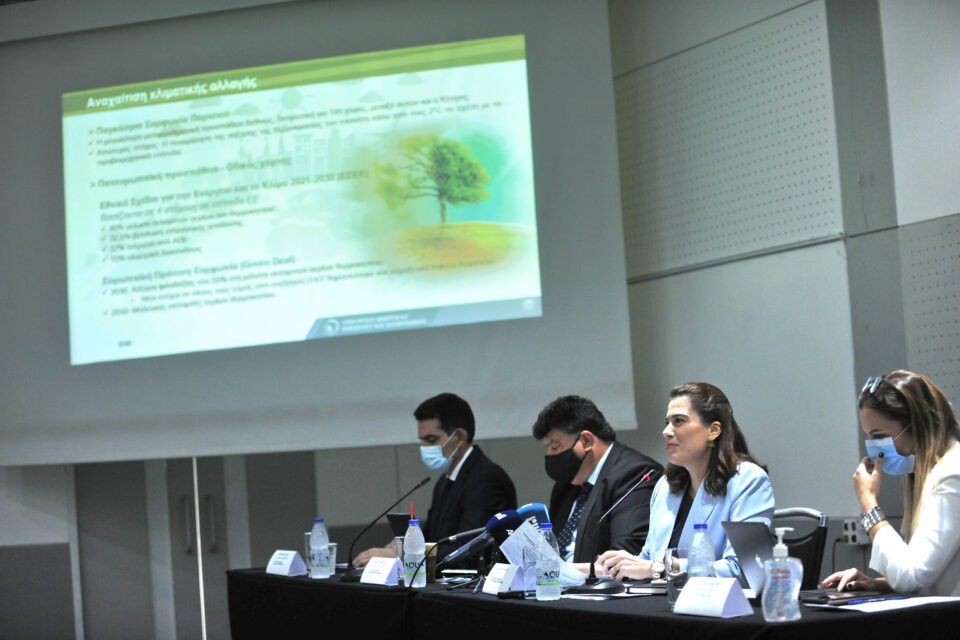 Energy Minister Natasa Pilides said Cyprus was aiming for a rapid transition to a green economy and to reach low to zero emissions by 2050.

The strategy was presented during a workshop held in Nicosia, where local stakeholders discussed also the forthcoming revision of the Cyprus energy strategy, based on the new, ambitious legislative framework announced on July 14 by the European Commission for the first climate neutral continent in the world.

The discussion was attended by representatives of organisations, associations, universities, companies and other stakeholders.

Based on the Commission’s new targets in the revised Green Deal, the ministry sets a target for 36 per cent reduction in final energy consumption compared to 32.5 per cent. The ministry also sets as a new mandatory target of 3% regarding the annual renovation of all public buildings and 1.7 per cent annual energy saving in public buildings. It also sets a binding target, for an increase of 1.1 per cent of the renewable share per year in heating and cooling and an increase of the general target for renewables by 8 per cent, increasing to 40 per cent from 32 per cent.

Presenting the energy strategy, Pilides explained that the green energy transformation is one of the five pillars of the government’s plan for recovery and resilience ‘Cyprus tomorrow’, which will play a key role in the development strategy of the country in the coming decades. She added that the ministry has a key role for the implementation of that effort.

Pilides pointed out that the ministry’s vision is a transition to a green energy profile, which will offer opportunities for sustainable living to citizens, prospects for economic growth in business, prosperity and extroversion in the country.

“We will achieve this,” she added, “by changing the productive model of the economy, by gradually adopting green and more environmentally friendly growth patterns by households, businesses and the public sector, and by lifting the energy isolation of our country “.

Analysing the opportunities and benefits from the transition to a zero emission economy, Pilides referred, among other things, to a healthier environment for the citizens, new green jobs that will be created, emerging opportunities for green investments and for the production of cheaper and environmentally friendly electricity, which will make the Cypriot companies more competitive in the international markets.

PIlides said that in order to fulfil its climate aspirations the ministry focuses in six pillars concerning strengthening the security of energy supply and lifting the energy isolation of Cyprus, the operation of the competitive internal market in electricity and the internal market in natural gas, the strengthening of the role of consumers in the energy market and the reduction of energy costs for households and businesses, the provision of incentives to encourage investments in a green and circular economy, the investment in research and new energy technologies and the important reforms in legislation.

She also referred to the creation of energy storage infrastructures and the preparation by CERA of the energy storage framework, for sponsorship schemes to encourage energy upgrading of homes and businesses and other incentives and funding

Our View: Whether the SafePass will encourage more youngsters to be vaccinated remains to be seen

Cyprus-flagged ships violate US sanctions at their own risk