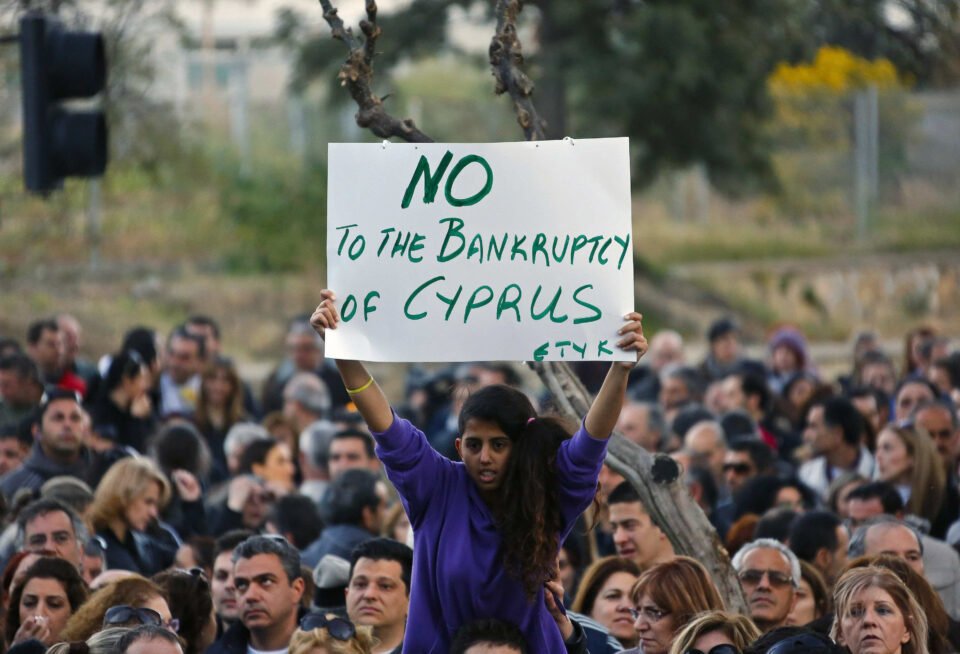 Demonstration against the Eurogroup decision in March 2013

Multiple cases, related to the Eurogroup’s March 2013 decision concerning the resolution of Cyprus Popular Bank Public Co Ltd (‘Laiki Bank’) and the bail-in of Bank of Cyprus Public Company Limited (‘Bank of Cyprus’), were removed from the registry of the General Court of the European Union on June 28, 2021.

The applicants in most of the cases initially claimed that the General Court should order the defendants – such as the Council of the European Union, the European Commission, the European Central Bank and the Eurogroup – to pay the applicants their economical loss plus interest accruing from March 26, 2013. In their view, the defendants in the context of that March 2013 memorandum of understanding required the Cypriot authorities to adopt, maintain or continue to implement measures that caused a substantial reduction in the value of their deposits, shares or bonds. They therefore brought actions to establish non-contractual liability before the General Court of the European Union, with the objective of being compensated for the losses which they claim to have suffered because of those measures.

Additionally, they argued that the Eurogroup decision of March 26, 2013, pursuant to Article 13 of the European Stability Mechanism Treaty of 2012, manifestly and gravely disregarded the limits on the power of the EU institutions under Article 136(3) of the Treaty on the Functioning of the European Union (the ‘TFEU’), and unlawfully surrendered effective control of their functions as EU institutions.

According to the orders issued by the president of the First Chamber of the General Court, the deletion of the cases occurred at the request of the applicants with no reason given. However, it should be highlighted that the fact that the case did not proceed for over seven years indicates the existence of some procedural or substantial issues. Cases before the General Court are generally dealt with in a shorter period than this.

It should be remembered that in 2018 the General Court already dismissed in multiple cases the pleas of inadmissibility raised by the Council concerning the actions for damages brought by the individuals and companies concerned against the Eurogroup decision. The first condition which must be met in order for the European Union to incur non-contractual liability pursuant to the second paragraph of Article 340 TFEU relates to the unlawfulness of the conduct alleged against the EU institution.

It requires that a sufficiently serious breach of a rule of law intended to confer rights on individuals be established. More specifically, the General Court, in two judgements (K. Chrysostomides & Co. and Others v Council and Others, and, Bourdouvali and Others v Council and Others) held that the individuals and companies that had brought those actions had not succeeded in demonstrating an infringement of their right to property, of the principle of the protection of legitimate expectations or of the principle of equal treatment. As the first condition for establishing non-contractual liability of the European Union was not met, the General Court dismissed the actions.

The supremacy of EU law in the Cyprus legal order