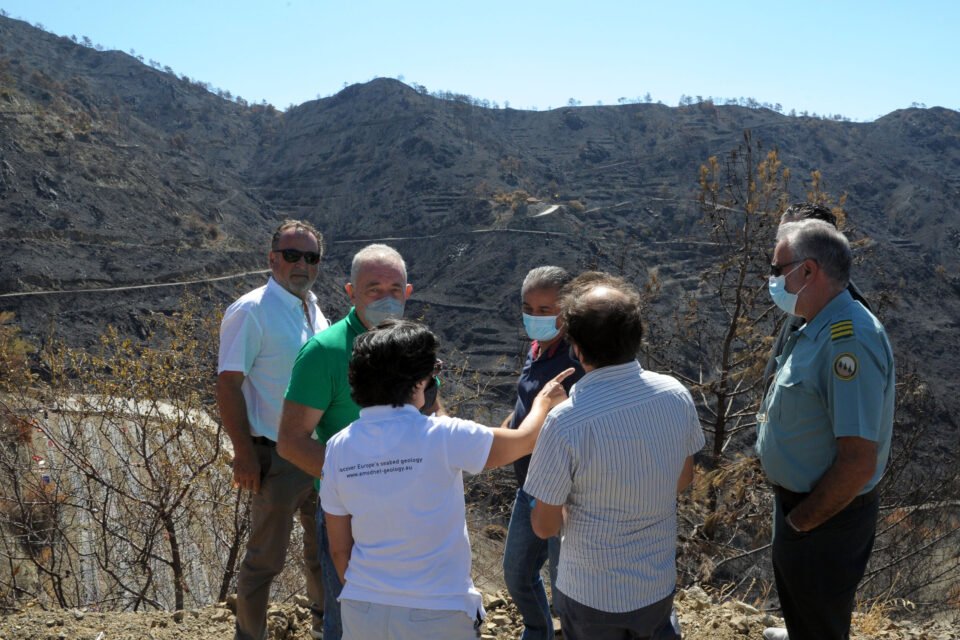 The team inspecting the area on Wednesday

A team of Greek experts on Wednesday visited the areas of Larnaca and Limassol that were affected by a huge fire early this month in a bid to determine what needs to be done to avoid flooding and soil erosion during winter.

The experts will survey the entire area, about 55 square kilometres affected by the fire, which killed four people and destroyed properties, crops, and forest, to identify problems or potential problems that could be created during winter.

“We will get a first view of what is going on in the particular areas and then map out all the anti-erosion and flood protection work that must be done in the area to prevent serious problems that are expected during winter,” senior forestry officer Andreas Christou said.

Professor of Dynamic Tectonic Applied Geology and Disaster Management at the National Kapodistrian University of Athens. Efthymios Lekkas, who heads the team of experts, said the aim was to help, using the experience they have from catastrophic fires at an international level and the destructive phenomena that follow them.

Lekkas said the priority was to carry out the necessary work to reduce the dangers that follow a large fire.

“We will survey the whole area to get a hands-on view,” Lekkas said, followed by a lot of work planning the projects.

“The plan to avoid major fires from taking place, especially in environmentally sensitive areas like this one, is three-dimensional.

“The first part of the plan will involve protecting the area from the induced hazards, such as landslides, soil erosion, flooding, water contamination and others, while the second one will require studying how the area will recover within a period of two to three years.

“I can say with certainty that the whole area will need targeted interventions, we cannot rely on good faith in this case,” he said.

As for the third part of the plan, Lekkas said that the whole area needed to be aided socially and economically after the disaster, “but that is a mere political issue, it is not up to us to intervene,” he said.

As for the first two points, he said it was advisable to act as soon as possible, considering that new incidents can happen at any time. There was also the issue of the protection of the surface water aquifers such as reservoir water and groundwater, which also suffered some damage due to the fire, the expert said.

Lekkas also added that the construction of dams in the area was advisable, particularly to help reduce the risk of floods. “However, there should be a minimum impact on the environment, so it would be better if the dams were made of logs or other natural materials.

“There is no general rule in such cases, each region has its own peculiarities and needs specific interventions with specific projects.”

The professor, however, said that seeing changes in the region before the winter would be difficult, including securing enough financial resources.

“One inhibiting factor that might be an obstacle is represented by bureaucracy. The other is the lack of specialised staff. I believe volunteers will turn out crucial for the plans and projects to be implemented,” Lekkas concluded.

Environment Commissioner Klelia Vassiliou expressed her satisfaction after the meeting with the team of experts. “They will shed light on all the discussions we have had in previous days about where we need to intervene in the area,” she said.

Vassiliou also thanked Agriculture Minister Costas Kadis “for his initiative to invite the team from Greece, whose experience will be of great help to us in order to avoid similar incidents in the future.

“However, we have to be prepared and see exactly how the changes can be implemented, how long it will take to do so and how much we will have to rely on the help of volunteers.

“Our aim is to support the inhabitants of the region, which include farmers and business owners so that we will not just restore the area, but we will also create more opportunities in it,” Vassiliou concluded.