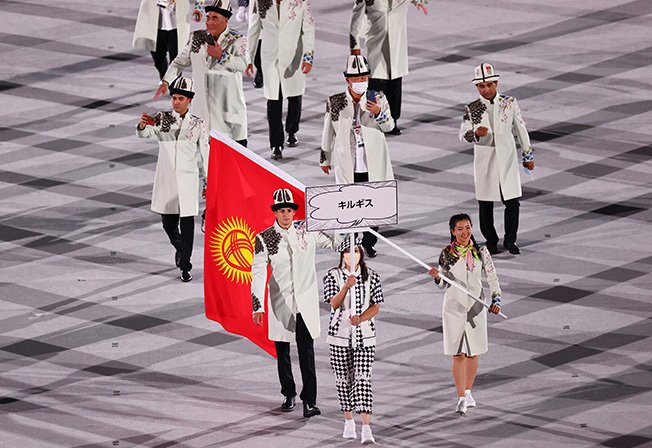 Just one Kyrgyz athlete covered his face, with the other members of the around 15-strong delegation, including its two flag bearers, waving and smiling as they walked in

The Olympic teams of Kyrgyzstan and Tajikistan paraded mostly maskless through Tokyo’s National Stadium at Friday’s Games opening ceremony, marking an awkward contrast with other national teams who covered their faces in line with COVID-19 protocols.

Just one Kyrgyz athlete covered his face, with the other members of the around 15-strong delegation, including its two flag bearers – shooter Kanykei Kubanychbekova and swimmer Denis Petrashov – waving and smiling as they walked in.

A short while later most of the Tajikistan team marched in similarly maskless, while Pakistan’s two flagbearers also chose not to cover their faces, unlike the vast majority of other participants at the ceremony.

The out-of-step gesture by the two neighbouring Central Asian countries came at the formal launch of a global sporting showpiece taking place in spectator-free venues and a COVID-induced state of emergency in host city Tokyo, a year after being postponed on account of the virus.

Tokyo 2020 organisers did not immediately respond to a request for comment about delegations without masks, but they drew a mixed reaction on social media ranging from irritated to darkly humorous.

“My kids pointed out that this country forgot their masks,” laughed one Japanese user called Panda Panda, while another person questioned whether central Asian countries missed the memo about mask wearing.

A third, Adma Steiner, joked that Turkmenistan, a third Central Asian and former Soviet republic, had “really walked out and stabbed Kyrgyzstan and Tajikistan in the back by actually wearing masks”.

In April, its health minister said the country would use a herbal tonic to treat the virus that Japarov had praised, despite warnings from a medical expert that it contained a potentially lethal poison.