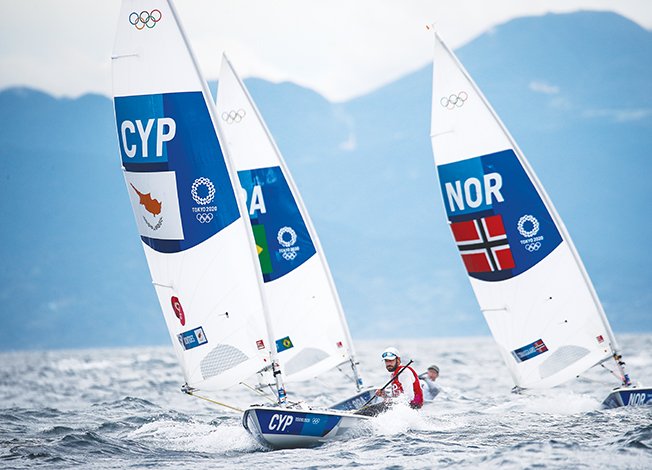 Pavlos Kontides in action on Tuesday at the Olympic Games

Cyprus star Pavlos Kontides leads the standings after the sixth race in sailing’s laser category at Tokyo 2020 on Tuesday.

The Cypriot, who won the silver medal at London 2012, scored two first places and a 20th to take the overall lead with 18 penalty points,
In second place is Australia’s Mat Wearn with 27 penalty points, while third is the Brazilian Robert Sid with 33 penalty points.

Kontides, 31, will enjoy a rest day on Wednesday before the action resumes on Thursday with a further two races.
According to the Cyprus Olympic Committee’s correspondent in Tokyo, Argyris Argyrou, the Limassol native was impressive in the fourth race on Tuesday. From the beginning he was in the group of leaders as he utilised his experience to take the lead at the penultimate buoy. From there it was full throttle to the finish line, having been very close to Norwegian Hermann Tomasgaard.

In the second race of the day, Kontides was left behind after the second buoy and could not recover, resulting in a lowly 20th place finish which he was able to discard as his lowest score

After a long delay, the organisers said the sixth race could go ahead, following its postponement due to bad weather on the opening day of action.
The Cypriot showed his intentions from the start, as he stormed into the lead from the third buoy and from there he managed to open up a significant gap, as he finished an impressive 13 seconds ahead of his nearest rival.

Elsewhere, in the women’s laser radial, Cyprus’ Marilena Makri finished the day in 28th place. The first race on Tuesday, and fifth overall saw Makri register her second-best display so far as she finish in 22nd place.
However, in the next race, the 18-year-old European under-21 champion could not maintain the same speed, as a result of which she lost ground, despite her good start and ended up 31st, which was her worst performance. She then proceeded to discard the disappointing display from her total score.

During Wednesday’s break for the laser and laser radial competitors, the RS: X athletes will return to the water. Cypriots Andreas Kariolou and Natasa Lappa will participate in three races (10th, 11th, 12th) in Fujisawa, optimistic that they will continue their upward course from Monday.

Elsewhere on Tuesday, Nikolas Antoniou gave his best in the Tokyo pool at his first Olympics. The 17-year-old Cypriot swam very close to his personal best in the 100m freestyle, finishing third in the fourth heat with a time of 50.00 seconds. This was only enough to rank him in 40th place out of 70 athletes.
Antoniou passes the baton to his sister Kalia on Wednesday, who will compete in the 100m freestyle women.

One in 10 in Cyprus drink sugar-sweetened soft drink daily